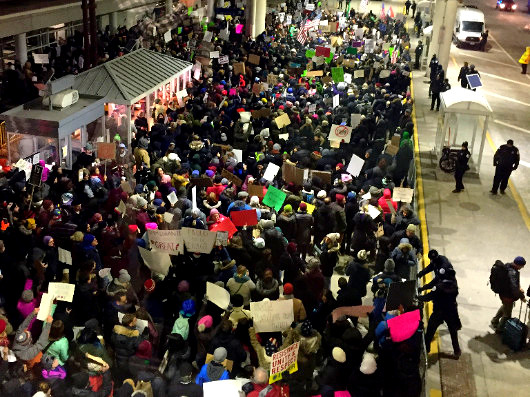 With each passing day since the inauguration of Donald Trump the news cycle gets more punishing. Power is consolidated within the executive branch. The three-headed monster of authoritarianism, fear mongering and intimidation takes another step on its march to trample checks and balances. Attempting to counter this force with reasoned argument has come to feel a bit like wielding scissors against an opponent who plays only with a closed fist in a relentless game of Rochambeau (rock, paper, scissors).

For a scholar the situation can seem disheartening to say the least.

Some of us—even those who do not like crowds—have thus taken to demonstrating.  “You know it’s bad when even the librarians are marching,” read one of the signs I saw at the Women’s March on January 21st in Washington, D.C. As many have reported, the march itself felt extraordinary: not only the experience of seeing and hearing hundreds of thousands reaffirm a commitment to civil rights, women’s rights, gay rights, immigrant rights, but also the sheer civility of it all, the wave upon wave of people making room for one another, a crowd whose desire was neither to get somewhere, nor to buy something; not to sell something, nor even to see something.

In a context of neo-liberal capitalism where everything is measured in profit, this might seem pointless to some or like mere consolation to others. David Brooks in his January 24th column in The New York Times wrote, “These marches can never be an effective opposition to Donald Trump,” because protestors “have a social experience with a lot of people and fool themselves into thinking they are members of a coherent and demanding community.” Furthermore, he continued, in what might seem a strange juxtaposition if not a contradiction, “identity politics is too small for this movement.”

What Brooks sees as a twofold weakness in this conjunction, I want to insist is exactly the strength of these demonstrations and even their most potent force, the fragile but pervasive and prevailing paper to Trump’s rock. This is not only because the march itself has given rise to a network of participation and a series of precise and delimited strategies ranging from the organization of canvasing efforts in swing states, to phone campaigns directed at members of Congress, to plans for more marches and more rallies, each of which brings its own flurry of media attention at a time when such attention seems to be the most sought-after currency in our world (as Farhad Manjoo recently argued in The New York Times). Rather, it is because the community created in these moments, ephemeral as it is, is one made up of people whose identities do not always overlap. Their differences and grievances might, in a different context, even be set against one another, but now highlight a shared sense of injustice. It may be that the community created in these moments is neither “coherent” nor “demanding,” certainly not in the way that we perceive a tribe or a church to be coherent in its criteria for belonging and historical consistency, but neither is this new community restrictive or exclusionary. If our current political battle is about “securing our borders,” these protests reveal the potency of decentered networks in overcoming borders.

At the more recent protests against the immigration ban at airports around the country, Jews, Muslims and Catholics have gathered together, both because they themselves were once refugees and because they fear for those who are or will be. Rabbis from Jewish congregations have followed representatives of Palestinian rights organizations in the speaking lineup. These communities show up because they or their families have suffered, because their identities are marked by that fact. Such a politics of identity is exactly what Brooks and political philosopher Mark Lilla think the Left should overcome, even as Trump’s policies are targeted not only at identity politics but also at the very identity and practices of anyone who isn’t a white Christian male.

It is ironic that a new form of identity politics may be emerging as a consequence of the very policies bent on suppressing it. As our family histories of immigration and persecution are re-invoked by this new wave of bigotry, we recognize that our political identities are anything but abstract. Particularity is also the key to perspective. To see the plight of others doesn’t require overcoming difference, but it does require thinking analogically. While Brooks claims that identity politics is splintering, a shared sense of threat to the very institutions that once protected us in our abstract freedoms and particular histories is surely a strong enough common cause. I read the other day that the strength of this new grassroots movement cannot be measured by its size, because it is now so easy to mobilize people into action. Isn’t that precisely the point?

None of this is to say that there is no room for reasoned argument, only that its potency now is not in direct confrontation with the blunt force of Trump and Steve Bannon. Trump is not going to change his policies because three thousand scholars signed a petition against him, but neither can he silence our paper machines. Spreading the word—or dissemination, as some of us like to call it—has perhaps never been more important. It ensures we’ll keep showing up in droves.

See All Articles by Sarah Hammerschlag