On this day, 499 years ago, a friar proposed 95 theses for debate and “posted” them (in today’s world and words), meaning he mailed them to his superior, the Archbishop of Mainz, and/or nailed them to the Castle Church door in Wittenberg, Germany 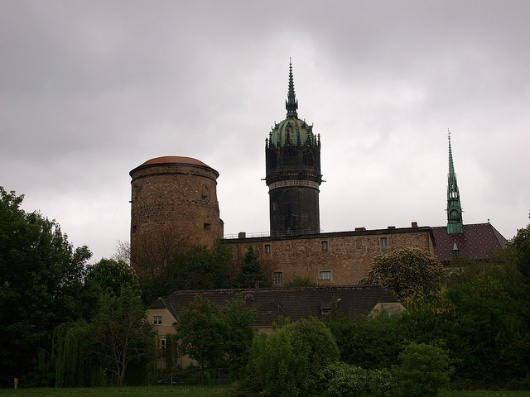 On this day, 499 years ago, a friar proposed 95 theses for debate and “posted” them (in today’s world and words), meaning he mailed them to his superior, the Archbishop of Mainz, and/or nailed them to the Castle Church door in Wittenberg, Germany. While that posting was in line with earlier efforts at reform of the Roman Catholic Church in England, Bohemia, and elsewhere, October 31, 1517, is the chosen marker for the beginning of what became the Protestant Reformation. What was, or is, the big deal? What is the “breaking news,” or, at least, “bending” of the Reformation story after five centuries?
Because heirs of Luther are supposed to be humble, they don’t ordinarily make noise or news, though they will sing and shout this year. Things have been put in place to put their Reformation in its place. Philosopher Alfred North Whitehead tried to, when he spoke of the Reformation as a family quarrel of northwest European peoples, who contrived events which Rome could not ignore, and tried to suppress, but which some other Christians, Eastern and Orthodox, “serenely ignored.”

What is the current status of the Reformation as it lives on among those Christians who call themselves “Lutheran” and/or “Protestant”? To update Whitehead’s cramping observation, we look at statistics in atlases. Yes, northwest Europeans in Germany still head the list. But also in the top 10 are Ethiopia (2nd), Tanzania (3rd), Indonesia (5th), and India (7th)—all of them among the nine nations where Lutherans number more than they do in the United States. “Protestantism,” the more expansive term and reality, is sizable in the U.S., but does not hold the majority it once did.

Enough numbers. They are naturally and necessarily inexact, given the fluidity of population moves and degrees of expression among faiths.

Today's Sightings is not “about” faith or worship or spiritual life. It only helps kick off a year of observance, much of it given over to Lutheran/Catholic commemorations. In one such commemoration today, and others to follow, Pope Francis is taking part. And our own “kicking off” is designed to offer a kick-start sample. As follows: the newest book to cram into my “Luther-an” shelves is called Our 95 Theses (see “Resources below.”) Those who remember the family quarrels in the northern world would expect the authors of a symposium with such a title to have names ending in “-mann” or “-schmidt” or “-son,” etc. Bear with me now as I list, and ask you to notice, the names of the authors in the new Luther-an book: Alfaro, Orlandi, Espín, Esqueda, García, González, Lozano-Díaz, Magellanes, Pérez, Guerra, López, Recinos, Florán, Rodríguez, Sánchez, and Sierra.

Sauerkraut or Lutefisk or Bier, anyone? Lutherans, like other Protestants, are learning to enjoy new menus and banquet tables. By the way, all 16 of those Latino/Hispanic names belong to U.S. citizens. The Southern and then Asian Lutherans, and the Euro-American veterans, have their own “family quarrels,” especially over policies “up north” which include the ordination and marriage of gays, etc. But whoever listens to these debates among people of faith in clashing cultures can take inspiration from the major agreements between Catholics and many Lutherans who have recently issued an impressive document, Declaration on the Way: Church, Ministry, and Eucharist, reviewing 50 years of dialogue toward “Reconciled Diversity” and looking ahead “on the Way” (see our August 22nd Sightings).

Incidentally, as you may have heard, today and a year from today will also be observed as “Hallowe’en.”

- Miller, Emily McFarlan. “US Lutherans approve document recognizing agreement with Catholic Church.” RNS: Religion News Service. August 15, 2016.
- Poggioli, Sylvia. “The Pope Commemorates The Reformation That Split Western Christianity.” NPR. October 28, 2016.
Sightings is edited by Brett Colasacco, a PhD candidate in Religion, Literature, and Visual Culture at the University of Chicago Divinity School. Click here to subscribe to Sightings as a twice-weekly email. You can also follow us on Twitter.