As reports and videos circulated over the past week of protesters, whose simmering anger was ignited most recently by the murder of George Floyd at the hands of police in Minneapolis, it was common to observe hand-wringing ambivalence over property destruction and plunder. “Sure, the anger is justified, but why would these protesters destroy their communities?” was a sentiment popularly shared. In most cases, we are not privy to the motivations of the individuals who started a fire or were first to bust through the shattered glass doors of an Apple store. Surely the reasons are not uniform. There seem to be multiple sets of actors. Many have rightly noted that buildings and merchandise are replaceable, while black lives are not. So those of us who nonetheless squirm at the sight of broken windows would do well to wonder why.

When complaints about the style of protests predictably emerged, I found instances of Christian iconoclasm—the destruction of images— surprisingly helpful for illuminating the array of feelings displayed toward property. According to Rufinus of Aquileia (History of the Church 11.22–30), in the leadup to the assault on the Serapeum in 392, the major temple of the Greco-Egyptian deity Serapis in Alexandria, Egypt, Christians looted and mocked cult objects from a local basilica, which led to clashes with armed defenders of traditional culture in the city. Having detained some of the Christians, the “pagans” retreated to the Serapeum while local Christians infiltrated the building, tearing down the massive, revered statue of Serapis. Taking advantage of their victory, these Christians hacked the statue apart, dragging it around the city in a triumphal display before burning its head for all to see.

We again do not know the specific motivations of most of these rioters, but Rufinus’s narrative implies that the Serapis cult statue was seen to bear an ontological relationship to the religious opponents of these Christians. This was a real cultural conflict and, in a significant sense, the destroyed statue was the adversary; its demise signaled a shift in the very nature of the city. Rufinus imagines that with Serapis destroyed, idols and statues, temples and shrines all over the city fell too. The landscape was cleared. New “temples to the true God” were built in their place.

The pagan chroniclers Zosimus and Eunapius, on the other hand, saw the assault on Serapis and its attendant despoliation as acts of greed: the riots targeted their stuff. Modern commentators, too, have sometimes expressed dismay over the destruction these Christians wrought—one recent popularizing work even suggests that iconoclastic episodes were the work of zealots too stupid to realize the harm they were doing. Whether we approve or not, however, for someone like Rufinus, the attack had to be understood as extending beyond Serapis. The other shrines were construed as part of a unified system and a toxic culture. Even as Christians lived in this city, these neighborhoods, no building that represented pagan worship had a place in the new Christian society.

I highlight this episode from the fourth century not to suggest that these events are the same, but rather as a reminder that iconoclasm is never meaningless, never neutral. Whatever the changes borne by the current protests will be, the destruction of buildings and confiscation of merchandise already carries significance. Among the first buildings attacked last week was the Daughters of the Confederacy building in Richmond, Virginia. In Minneapolis, the 3rd Precinct Police Department building went up in flames. The Lake Street Target where the company aimed experimental surveillance practices at poor people was looted. In cities across the country, windows were smashed and structures went up in flames, not as the result of senseless violence but in iconoclastic claims on space and community. “This Akira is not ours; downtown Chicago is not for us.”

Other conquered buildings may be less symbolic. I have no doubt that business owners are upset and that under the current system such acts may harm vulnerable communities further. But damage and looting in the current protests constitute assaults on the very systems that enable economic and racial oppression, and on those who benefit most. When we sympathize with the buildings, we identify with extensions of these systems. In order to build a new society, one notably in which black lives truly matter, it might be necessary for such idols to be smashed and burned away.

Image: A protester carries a U.S. flag upside down, a sign of distress, next to a burning building Thursday, May 28, 2020, in Minneapolis. (Photo Credit: Julio Cortez | AP) 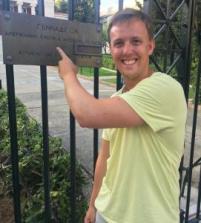 Author, Nathan Hardy (MA’14), is a PhD Candidate at the Divinity School in History of Christianity. He studies material and narrative formations of late ancient and Byzantine Christianity, and is currently writing a dissertation titled “Signs of Life: Christian Narrative Engagements with the Paradox of Living Images.”

See All Articles by Nathan Hardy