Protest and the Raging Messianic

How do our responses to pestilence and protest reflect the value of human life in our religious imagination?

My tongue is dumb,
It cannot speak a word.
My senses are all blighted.
Therefore is it time
That Thou my fight
Conductest hereafter;
Since I am not
So strong, that I can bravely
Make resistance
To the Devil’s wiles and treacherous hand.
Still will my spirit
Constantly abide by Thee, however he rages.
-Huldrych Zwingli, “In the Midst of his Illness”

I watched the recording of the life being crushed from George Floyd’s throat as he begged for breath. I listened to the pleas of the bystanders as they watched a man die before their eyes. It felt as if bearing witness was something I ought to do as an ethicist, a theologian, and as a Black man. But the violence on display, the nonchalant disregard for human life and the cries of the oppressed, struck me numb in a way I have never experienced. If the act of crying out for your dead mother as your face is ground into the concrete does not make your humanity manifest in the mind of oppressors, what act will? If you find it hard to understand the reaction of those marching in response to a series of injustices done to Black people at the hands of white supremacy, what plea could possibly move you?

Over the last week, I have been reengaging with the thought of Albert Cleage Jr. and his book The Black Messiah. Cleage argues that new times call for new religious interpretations and that revolution is meant to destroy outmoded ideals and values used to oppress those forced to the margins of society. At the heart of Cleage’s thought is the traditional use of white supremacist religion, often preached in Black churches, to pacify Black folk. A white supremacist theological conception of the messianic is used to convince Black people that they ought to aspire to join the order that dominates them. Respectability, to be meekly civilized, is the sign that you have transcended the lowly condition of your racial heritage and have gained entry into the order which continues to define you as less than human.

Cleage insists that true revolution is a dis-ordering which marks a conceptual difference between viewing uncivil responses to state violence as a riot or as an uprising; a conceptual difference between respecting the present order of things or challenging, rather than seeking to join, systems of oppression. The messianic is interpreted as a force of destruction which calls the believer to side­ with the emergence of a new order which often comes with disorganization and raw emotion.

Zwingli wrote the song of pestilence quoted above during the plague of 1519, which had already claimed the life of his brother and was now ravaging his own body. In desperation, Zwingli acknowledged that he lacked the strength to fight alone—that he would have to depend on the higher order of the universe to determine his fate. What an apt intervention in our current circumstances of a pandemic fueled by inequality and the escalation of events which seems beyond our ability to control. Cleage’s messianic is raging in the streets—the language of the oppressed is howling for justice.

The cries for a common humanity were ignored in the case of George Floyd, which, according to Cleage, demands that the means of communication must be changed to conform with the demands of the times in which we live. Fire has spoken louder than Black dignity. If looting bothers you, but the death of a Black man literally trod into the dust is a matter of patience and civil order, then you are rejecting the fundamental change and revolution of values tied up in the person of Jesus as the Christ. On Monday night, Donald Trump stood in front of St. John’s Church in Washington, D.C., and held up a bible as he called for the “domination” of American citizens (protesters) through violence. In such a time it is necessary to remember that in rebelling against domination, you are obeying the overarching justice of a God of compassion, survival, and liberation. It is my prayer that you may “bravely make resistance to the Devil’s wiles and treacherous hand”—even when that hand is holding a bible and the sword of state. 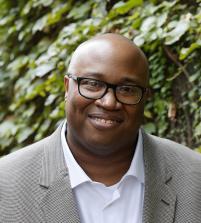 Author, Foster J. Pinkney, is a writer, organizer, and doctoral candidate at the University of Chicago Divinity School in the field of Religious Ethics. Working from a Christian humanist perspective, he uses hermeneutic theory, Black theology, and Stoic philosophy to reconceptualize the ethical demands of social existence. Foster's dissertation project is titled "Rending the Veil: Black Dignity Reconstructed through the Works of Frederick Douglass and W. E. B. Du Bois."