A Letter from the Editor

Essays in this issue:

Last Monday, May 25, Minnesota police officers arrested George Floyd, a 46-year-old black man, after responding to a call from a Minneapolis deli employee accusing Floyd of trying to buy cigarettes with a counterfeit $20 bill. Video footage shows that seventeen minutes after police first arrived, Floyd, who was unarmed, showed no signs of life as he was pinned against the ground by three police officers. For more than eight minutes, Officer Derek Chauvin kept his knee on Floyd’s neck as he repeatedly told officers that he couldn’t breathe and called out for his mother. Two autopsy reports released Monday listed Floyd’s death as a homicide.

Following closely on the shooting deaths of Breonna Taylor, an unarmed 26-year-old black woman and emergency room technician who was shot and killed by Lousiville police officers while sleeping in her apartment, and Ahmaud Arbery, an unarmed 25-year-old black man who was chased down, shot, and killed by armed white Georgia residents while he was out for a jog, Floyd’s killing by Minneapolis police has triggered unprecedented protests and rioting in cities and towns across the country.

Sightings strongly condemns the inhumane police brutality resulting from a culture of white supremacy that killed George Floyd, as well as the anti-black racism that is daily inflicted on African Americans throughout this country. We will continue to use the space in our columns to investigate and expose the ways that religion and the religions are complicit in systems of racial oppression and in fomenting racial hatred, while also “sighting” instances where they work to undo racist systems and resist prejudice of all kinds. As Dean of the Divinity School, David Nirenberg, recently wrote in a letter to the Divinity School, “even as we protest injustice and strive to improve and to support our own community, we must also remember what our own work here at the [Divinity] School can offer to the world. The faiths and religions we study shape the values and beliefs of much of that world—including values and beliefs about humanity, violence, racism, equality, and justice. How we study, what we teach, and how we serve communities can change the world.”

Today’s special issue of Sightings brings together five Divinity School students and recent graduates to comment on the role of religion in the events of the past two weeks, as well as to explore the potential contributions that we in the academic study of religion, in all our various areas of expertise, can make to the broader national conversation that is taking place at this moment. Foster Pinkney, a PhD candidate in Religious Ethics, writes about how our responses to pestilence and protest reflect the value of human life in our religious imaginations. John Sianghio, a PhD candidate in Religious Ethics, explores what Christian theology might have to say about the looting and vandalism that has accompanied many protests around the country. Aneesah Ettress, a Master of Divinity student, offers an invitation to process pain and experience healing in this moment through the viewing and contemplation of contemporary Black art. Nathan Hardy, a PhD candidate in History of Christianity, considers how Christian acts of iconoclasm may illuminate the aims and effects of property damage and looting during protests. Finally, Russell Johnson, a recent PhD graduate and current Teaching Fellow at the Divinity School, contemplates the questions we should and shouldn't be asking about riots by turning to the example of Martin Luther King Jr.

We hope you find this special issue worthwhile, challenging, and meaningful. As always, we invite your comments and questions. Thank you for your readership.

Image: A man walks past a mural depicting George Floyd during a protest of his killing by police, on Sunday, May 31, 2020, in Los Angeles. 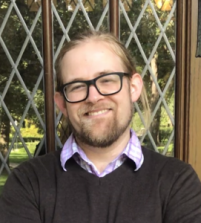 Managing Editor, Daniel Owings, is a PhD Candidate in Theology at the Divinity School; his research focuses on discourses surrounding idolatry in sixteenth-century European Christianity.

See All Articles by The Editor