Why White Evangelicals Stuck with Trump

Why did Donald Trump’s support among white evangelicals hold steady between 2016 and 2020, in spite of his troubled term in office?

The reasons for this steady support are multifold and complex. However, several studies offer some clues. In both 2016 and 2020, LifeWay Research asked evangelicals-by-belief which of a candidate’s characteristics was most important to them in casting their ballot. (“Evangelicals-by-belief” are defined as those who embrace the Bible as the final authority in their lives, believe in the crucifixion of Jesus and in salvation through Christ alone, and actively evangelize their neighbors.) 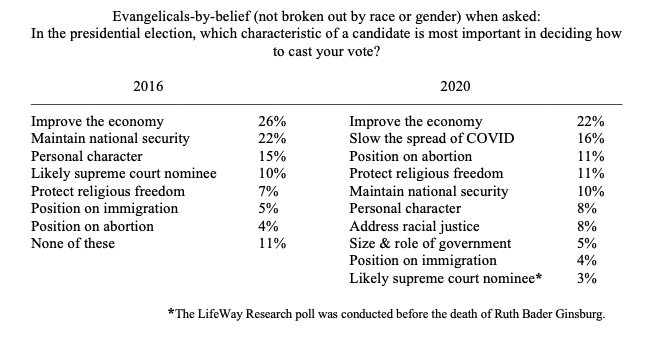 A candidate’s character proved to be less of a factor in the 2020 voting decisions of evangelicals-by-belief than in 2016. This, although nearly two-thirds of white evangelicals surveyed by Pew Research in 2020 said that they either disliked or had mixed feelings about Trump’s conduct.

Rather than character, the need to improve the economy was the issue that mattered most to evangelicals-by-belief both in 2016 and in 2020. Many Americans, including many evangelicals, held that Trump had delivered on the economy in 2020, as they believed he would in 2016. They praised his pre-COVID performance, giving him credit for low unemployment rates and rising wages. White evangelicals continued to trust Trump’s handling of the economy even during the pandemic: though his approval ratings among them slipped from 78 percent in early April to 72 percent by mid-June, 82 percent still said he could count on their support if elections were held then.

Trump also succeeded at cultivating a loyal following among some white evangelicals because of his targeted outreach to them during his years in the White House. Throughout his administration, he paid special attention to at least two issues that this demographic cares about: abortion and religious freedom.

The importance of abortion for evangelicals-by-belief when considering a presidential candidate rose from 4 percent in 2016 to 11 percent in 2020, a nearly three-fold increase in just four years (see the LifeWay Research poll data reproduced above). Ranked seventh in 2016, abortion skyrocketed to third place in 2020—only COVID and the economy were of greater concern that year. Likewise, religious freedom rose in importance from 7 to 11 percent, climbing from fifth to fourth position.

These shifts may be, in part, a response to Trump’s steady drumbeat about abortion and religious freedom, a drumbeat amplified by many high-profile white evangelical leaders. Regardless of the cause for their increased importance, Trump’s stance on these issues likely helped him at the polls.

In addition, data indicates that it may be difficult for some white evangelicals not to support Trump. Especially for white evangelicals with a high investment in congregational life, churches are important sources of community that they are loathe to disturb. As in other close-knit communities, members tend to exert pressure on others to conform, and backing Trump appears to have become an “in-out” marker. If so, one would expect that white evangelicals who attend church more frequently are more invested in Trump.

Indeed, this is the case. A pre-2016-election poll by Pew Research showed that nearly 80 percent of self-identified, white evangelical registered voters who planned to vote for Trump said they attended church at least once or twice a month. In contrast, those who attended church less often supported Trump at lower rates: only two-thirds of these white evangelicals planned to cast their ballots for him.

Seemingly uniform pro-Trump white-evangelical churches foster pro-Trump voting not only because they enforce conformity, but, according to political scientist Ryan Burge, because such uniform cultures can create a “spiral of silence.” A spiral of silence occurs, Burge says, “where minority voices are afraid to speak up and then persuadable voters are convinced that everyone agrees with the loudest voices.”

Take, for instance, Janice Barchie, an anti-abortion white-evangelical Republican who home-schooled her seven children. She chose to vote for Biden “because of Trump’s behavior” but, contributing to the spiral of silence, she did not to share her decision with long-time church friends. She told the NYT: “It’s one thing to make a passing comment to a neighbor or a woman in the gym, but if I lose my friends from 20 years, I’m not going to have any friends.”

Lack of fealty to Trump by white evangelical ministers is punished as well, contributing further to conformity and the spiral of silence. Joel Hunter, for example, a popular white evangelical minister for over 30 years, voted for Trump in 2016. After a political change of heart, he founded Pro-Life Evangelicals for Biden in 2020 and quickly met with fierce and ugly push-back from fellow evangelicals. Though some of his ministerial colleagues shared his views, they postponed or cancelled his speaking and preaching engagements because they did not want to face the same fierce and ugly push-back.

A recent hint of dissent against a pro-Trump stance had telling results. When John Hagee addressed his white evangelical megachurch in San Antonio, Texas, on the Sunday after the assault on the Capitol, he did not mention Trump. However, he condemned the attack and what he called a “rebellious mob.” His congregation’s reaction? Weak applause. It was Hagee’s spirited praise of law enforcement that won a standing ovation. Though anecdotal, these responses may indicate that support for Trump among white evangelicals remains steady.

The next elections in which this demographic could have a significant impact on the body politic are two years away. Given that the economy is consistently the dominant issue for white evangelicals, if Joe Biden succeeds at steering the nation toward recovery, Democratic candidates may enjoy a small, quiet shift in their direction. 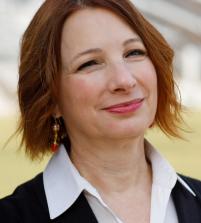