As we slowly re-emerge from a very difficult year, William James's pragmatism offers some wisdom

With “whack-a-mole” as a tempting metaphor for this moment, we are still experiencing endless crises. In the onslaught, some of our fellow citizens are driven to exhaustion and dysfunction, attempting to whack all moles that pop their heads up. Others turn away in the post-apocalyptic conclusion that the game is unwinnable and essentially lost—so they rush off to either passive or aggressive expressions of their modern American individuality. What are we to do? High rates of suicide, depression, drug and alcohol abuse, and never-ending reports of corruption and moral disease suggest that we are not doing well. At the deeper level of political and cultural movements, the situation seems similar to what Sidney Hook referred to as “the failure of nerve,”[1] the loss of confidence in modern democratic values signaling the collapse of Western civilization. Hook was speaking of the basic attitudes and values that underlie American democracy, including the intrinsic worth of every individual, the value of differences, shared faith in essential institutions to resolve conflict, and the capacity of reason to overcome superstition and authoritarianism. He might have pointed also to the active side of this dynamic: the hyper-nerve of those who energetically accept conspiracy theories and the really wild and violent political strategies that bloom in our time.

As we crawl out from the very long winter of COVID and Trump, William James provides some helpful reminders. In his classic work, Pragmatism: A New Name for Some Old Ways of Thinking (1907), he proposes that we choose to participate in a world which is “not certain to be saved,” and yet one dependent for its salvation—if any is to come—on the condition that each person “does their level best.”[2] He envisioned humans in a cooperative, co-creative relationship with God, or what he called “an unseen order” in his earlier Varieties of Religious Experience: a god whose initial act of creation was left incomplete, inviting humans to join in the project. The sense of risk associated with accepting this invitation can be overwhelming—maybe better to hold back in the seemingly safer posture of cynicism.

Here is a very significant way of understanding the human drama, its disease and its remedy. It is all the more compelling once one has experienced “Pandemic Brain,” a condition of partial paralysis that has been widespread even among people who have not tested positive. James’s suggestion is expressive of a worldview which is considerably at odds with traditional understandings, especially those in the West that have tended toward detached, static, patriarchal, authority-oriented views of the relationship between God and world (or essence and existence). By way of contrast, James’s understanding is expressive of a worldview in which inspiration enters and sustains the world through the thought and action of those who are “doing their level best” to be faithful to Earth as “our common mother.”

James presents his understanding as a hypothetical for our consideration: “Suppose that the world’s author put the case to you”—the case for our doing our best in an uncertain world? Especially in the absence of any more authoritative answer to the perennial question, “What is life and how can we live it?,” wouldn’t we choose for cooperation and mutual support along with the maintenance of our own dignity?

Let us observe that this understanding is based on conscious awareness and choice, rather than traditional revelation or command or post-traditional weight of empirical evidence. It is also important to note that choice, as James presents it, is to be guided not by any particular metaphysic, but by considerations of results, consequences, and evaluations of what the various choices come to in the lived world of our purposes and relationships—in short, the world we choose to create.

So let us stand up in the warmer seasons with greater awareness of what we are doing and why, including the components of our chosen way of self-care and of giving articulation to the new culture we are creating. James acknowledges that there is a leap of affirmation involved in choice of this life-way:

The return to life can’t come about by talking. It is an act; to make you return to life, I must set an example for your imitation, I must deafen you to talk, or to the importance of talk, by showing you, as Bergson does, that the concepts we talk with are made for purposes of practice and not for purposes of insight.[3]

We may still have the chance to join in the shared vocation of saving the planet. James suggests that we are desperately in need of a culture which supports this possibility, and that we are capable of taking the action to make it our own life-vocation.

Here’s hoping we can hear this message today—from James and other sources, even despite a radical upsurge in post-apocalyptic behavior which assumes that these days are really the last days, and that we have already dropped off the cliff of oblivion, such that pandemic and the final episodes of Trump are phenomena of freefall. Maybe they are, but maybe they aren't. William James recommends we “posit life.”[4]

[3] A Pluralistic Universe, Lecture VII, “The Continuity of Experience.” 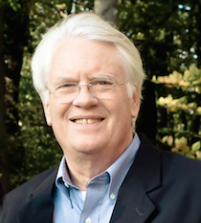 Author, Stephen C. Rowe, is professor emeritus of Philosophy at Grand Valley State University. A second, “From Pandemic” edition of his Overcoming America / America Overcoming will be published later this year.