“This sounds like a flip answer,” said Lutheran Pastor Jan Erickson-Pearson, “but why does [clerical sexual abuse] still happen? Sin.” That was in 2002, but headlines still on occasion use the same three-letter theological word to explain the phenomenon that troubles all denominations today (correct us if you know of an exception) 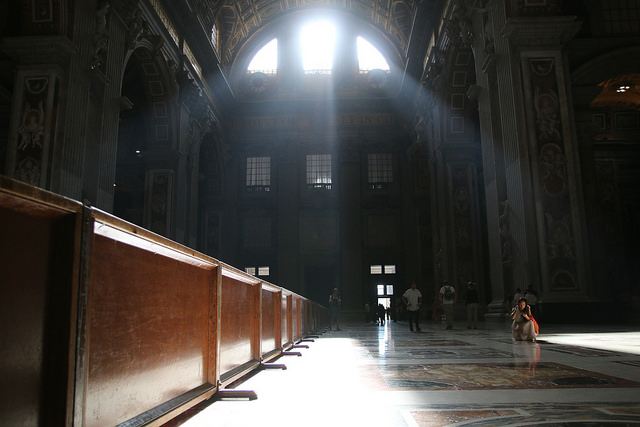 “This sounds like a flip answer,” said Lutheran Pastor Jan Erickson-Pearson, “but why does [clerical sexual abuse] still happen? Sin.” That was in 2002, but headlines still on occasion use the same three-letter theological word to explain the phenomenon that troubles all denominations today (correct us if you know of an exception). We’ll let the theological lexicographers define and debate the nuances of “sin,” and turn directly to what journalists and historians have to notice and ponder. One way to begin such reflection—which we call “sighting”—is to deal with the reach of the word “all.”

Last week in Vatican City, Pope Francis tried to seize some initiative back from scandalizers by addressing the conveners of a three-week assembly concentrating on one perplexing arena, the world of Catholic youth. As Elisabetta Povoledo observes in the New York Times, “[w]ith pews emptying and clouds of scandal hanging over the church, the Vatican on Wednesday opened the gathering to discuss how to bring young people into the fold.” As for the until recently revered and only faintly criticized pontiff, Francis now has company among the castigated clerical leaders who were already aware of what the Pew Research Center confirms: that 62 percent of Catholics in the United States believe the pope “is doing an ‘only fair’ or ‘poor’ job” in addressing the problem.

Sightings’s by now one-thousand-ish Monday issues, over the past two decades, have rarely dealt with sexual themes, including abuse. But the sparseness of critical comment on the pope and bishops in these columns has not resulted from our ecumenical bias. A couple decades ago it may have seemed unfriendly and ungenerous for non-Catholics to point to the faults in Catholicism, as being those of the “other.” So pervasive are the scandals and offenses today, however, that the Church of Rome is judged more harshly by communicants than by many of its old critics and enemies. Readers who google their choice of keywords pointing to the clerical abuse scandal will find that the responsible Catholic press, left and right, is full of expressions of disappointment, criticism, rage, and—since we are talking about sin—urgent calls for repentance.

Repenting always has to start with one’s own faith tradition and commitments, which, in my Lutheran case, never allow for rose-colored glasses. My, and our, internet files are crammed with accounts of sexual sins and “cover-ups”; reports on them inspire, or should inspire, grieving, repentance, and resolve. Those who wonder what I am talking about can click here or google “child sexual abuse by Lutheran clergy” for scores of instances. Or, for a variety of other Protestant examples, substitute the words “Baptist,” “Episcopal,” “Presbyterian,” etc., etc. Nowadays, add some variation on the protean reaches of the term “evangelical” to find more. We mere historians, who are not apocalypticists or flame-throwers, find ourselves and our colleagues speaking of these times as being marked by the most threatening and devastating traumas to the churches since the Reformation, the Enlightenment, and the Revolutions.

How to regard “sex” and “sin” and “repentance” now? Seventy years ago I was assigned (“called”) to a parish pastoral assistantship, and appreciated many hours which found me being mentored by a veteran senior pastor. Early on he counseled me as to how I might counsel parishioners. “First of all, remember that you are and will be tempted to sin …” And I jammed in: “… except to the really big sins.” He leveled: “especially the really, really big sins.” You cannot examine yourself or be of help to others without soulful awareness that we are now living in a time when priests, pastors, parishioners, and people in different spiritual categories are tempted to, and sometimes practitioners of, the “really big sins.” The fledgling pastor M.E.M. of two-thirds of a century ago was also taught never to accept such judgments as the last word. They are prompts for new “first words.”

Stop! If I continue on repentance and newness, I’ll be demonstrating one of the smaller sins to which journalists and commentators are often tempted—i.e., preaching or pontificating. Looking ahead: please, in the future, read along with me, listen with me, learn with me and with other “sight-ers,” and be open to twice-weekly examples of self-critical Sightings, whose authors will aspire to live in hope. We hope.