Prelude to Censorship: The Toleration of Blasphemy in Ancient India

India today is experiencing a powerful wave of censorship of literary texts, films, and artworks

India today is experiencing a powerful wave of censorship of literary texts, films, and artworks. Such a degree of repression is unprecedented in India, but it is rooted in concepts of blasphemy that underwent a number of changes throughout Indian history.

In approaching that history, it is useful to make a distinction between two aspects of religion: orthodoxy (believing the right thing) and orthopraxy (doing the right thing).  Though the categories are rather crude, and there were exceptions, in general, Hinduism during its early period was far more orthoprax than orthodox.

Dharma—which includes duty, religion, religious merit, morality, social obligations, justice, righteousness and the law—regulated the way people behaved, particularly toward Brahmins (the highest class, from which priests were drawn) and toward members of other castes, more than what people believed, particularly with regard to the gods.

The Oxford English Dictionary defines blasphemy as “[a] profane speaking of God or [b] sacred things; [c] impious irreverence.” The ancient, polytheistic Hindus had no concept of blasphemy in the sense of [a] “profane speaking of God,” which is primarily a problem for monotheism. With so many gods, one could not help preferring one over another, inevitably slighting some god or other. It did not matter if you insulted gods who made no claim to omnipotence or omniscience, and certainly not to benevolence.

Texts in this period, therefore, quite confidently indulged in what non-Hindus might regard as blasphemous attitudes to the Hindu gods: they told stories in which Shiva committed adultery and cheated at dice, Vishnu violated dharma by killing a woman, Krishna made love to married women, Brahma lied, and so forth. There was no concept of orthodoxy to violate.

Still, for most Hindus throughout history, blasphemy in the sense of [c] “impious irreverence” (to the Brahmins) was indeed a problem. Adharma (non-dharma or anti-dharma), the opposite of dharma, is not [a] blasphemy, which no one cared about; adharma means [b, c] not behaving properly, offending the Brahmins, for which there were penalties. And so people were far more circumspect in what they said about Brahmins than in what they said about gods.

For instance, the law-maker Manu, in the second century C. E., does not mention any punishment for verbal abuse of the gods, but he prescribed serious fines for the verbal abuse of Brahmins (Manu 8.267-8).  In particular:

If a man of low birth hurls cruel words at a Brahmin, his tongue should be cut out. If he mentions his name or caste maliciously, a red-hot iron nail ten-fingers long should be thrust into his mouth. If he is so proud as to instruct Brahmins about their duty, the king should have hot oil poured into his mouth and ears. (Manu 8. 270-73).

Words were dangerous, or at least punishable.

The textbook of politics, the Arthashastra of Kautilya, composed during this same period, is far more lenient than Manu in the prosecution of verbal abuse. When someone of a lower caste insults someone of a higher caste, such as by saying, “Vile Brahmin!” (a significant example), the offeKnder is merely fined (AS 3.18.7).

And it was safe to mock Brahmins in certain ways. During this period, most plays have a court jester who is a Brahmin and speaks Sanskrit (in contrast with lower castes and women, who speak a dialect) but is a greedy, idiotic buffoon. The image of the fat and gluttonous Brahmin is also common in other contemporaneous texts. But authors usually did not dare to imply that Brahmins performed sacrifices only for the money (or the food) they were given in payment. The sacrifice and caste dharma were too important to mock.

Under the circumstances, it is amazing that some texts said as much as they did. How did they do it? They managed a brilliant end-run around dharma, subverting it by lodging an antinomian tradition in the body of normative texts. Like a driver with one foot on the brakes and another on the accelerator, certain Hindu texts ricochet between the praise of dharma and a critique of dharma.

It is the custom in the ancient Indian textbook tradition first to cite the opponent’s opinion—known as the “prior faction” (purva paksha)—often without explicitly noting that it is, in the author’s view, incorrect, and then to state the author’s own, correct opinion, setting up opponents as straw men and then demolishing them.

Texts will also sometimes quote older scholars or “opposing schools” in order to say rather extreme things that the authors quoting them really believe themselves but do not want to acknowledge as their own, to get them on the table and then say, “Oh no, don’t do that,” in much the manner that a lawyer might reveal inadmissible evidence to a jury and then, when reprimanded by the judge, say, “The jury will disregard those remarks.”

It is not always easy to tell apart these two agendas—setting up straw-men to demolish and using stalking horses to say what you yourself do not dare to say outright—since they both take the same form: ostensible disagreement.

The “prior faction” technique thus serves, in ancient texts, as a useful way of challenging dharma without seeming to challenge it. This technique represents what anthropologist James C. Scott has taught us to call a hidden, subversive transcript, one of the arts of resistance.

The worlds these texts imagined largely disregarded, rather than challenged, the power of Brahmins. The texts were perpetuated by Brahmins (no one else wrote Sanskrit texts) under the noses of other, more conventional/traditional Brahmins; this was no class struggle. The knowledge of Sanskrit was limited to a small, highly elite group consisting primarily of men—mostly Brahmins with a sprinkling of nobles, wealthy merchants, and women.

They alone would have been able to read these texts in the original. These texts therefore had a very limited direct effect on the actual lives of all classes. But, since the ideas in Sanskrit texts were paraphrased and translated into the vernaculars, their indirect effect may well have been widely diffused throughout the general population.

An important instance of the “prior faction” technique can be seen in the case of people known as “Materialists” (Lokayatas, literally “wordly people,” or Charvakas, “sweet-talkers”), who expressed seriously—or, sometimes, hilariously—adharmic ideas. The straw-man citations of Materialists in ancient Indian texts (Buddhist as well as Hindu) reveal numerous instances of resistance to the dharmic party.

An early mockery of Materialist views appears in the Ramayana, a Sanskrit epic poem (composed between c. 200 B.C.E. to 200 C.E.). A man named Jabali urges prince Rama (the hero of the Ramayana) to ignore family obligations such as the central Hindu ritual of offering food to dead ancestors. Jabali offers the following argument:

People here busy themselves with the rite for the ancestors. But just look at the waste of food—what really is a dead man going to eat? And if something one person eats here could fill the belly of someone else, one could simply offer the sacrificial offering for a traveler, and he would need no provisions for the road. It was only as a charm to secure themselves donations that cunning men [i. e. Brahmins] composed those books that tell us, ‘Sacrifice, give alms, sanctify yourself, practice asceticism, renounce.’ Accept the idea once and for all that there exists no world to come. (R 2.100.11-17; trans. Pollock, 521-3).

Jabali may merely be acting as the devil’s advocate, to stir Rama into righteous indignation (which is precisely what happens), or he may mean it. The arguments that he offers—accusing the Brahmins of being in it just for the money, and mocking the ideas of feeding ancestors who are not physically present, and of a heaven to come—were to be repeated for centuries when anyone wanted to satirize Materialists. Other texts usually also add one more bit of blasphemy: If you believe that the sacrificial beast goes to heaven, why don’t you sacrifice your own father, and send him to heaven, too?

The Kamasutra (1.2.21-32), the textbook of erotics, composed slightly later than the Arthashastra, lists Materialists along with fatalists and pragmatists. These were not philosophical schools but types of persons, people who care only about material wealth and having fun, as we might speak of a person as a Stoic or an Epicurean—not someone who follows the Roman philosophies, but just someone who enjoys a good bottle of wine.

The Materialists were said to engage in the ancient Indian brand of blasphemy, attacking the sacrifice and the Brahmins; but they were not accused of blasphemy in our terms; they didn’t bother to attack the gods (which everyone was doing anyway).

Our knowledge of the Materialists, however, is only secondary and fragmentary, based entirely on criticism of their ideas by other schools. We have no examples of any Materialist texts; all we have are quotations from Materialists in other texts, which express strong disapproval of them. In my opinion, the Materialists never ever existed as a school at all, but were invented by a Brahmin or a group of Brahmins as a way of smuggling blasphemous ideas into their texts under the pretext of disapproving of them.

Materialists continued to be mocked in this double way (ostensibly to condemn, secretly to propagate their critique) despite major changes in attitudes to blasphemy starting around the sixth century C.E., during the period of bhakti, passionate devotion to individual gods.

Some Hindu bhakti sects behaved more like monotheistic religions, positing a single deity and, unlike most other forms of Hinduism, actively seeking converts. For Hindu polytheism is so open-minded that it can incorporate monotheism, too. Even so, during this period, there were occasionally violent conflicts among Hindu sects and with other religions, particularly Jains but also Buddhists.

Later, the bhakti movement changed again in response to Islam. The arrival of Islam in India stimulated the need to compete with a proselytizing monotheistic religion, a presence that enhanced and complexified already-present elements of monotheism in Hinduism. Some of the bhakti sects, as a result, became orthodox as well as orthoprax, predisposing them to defend their doctrines as well as their practices against those who differed from them.

This was the situation when the British arrived in India in the 18th century, introducing new factors that once again transformed Hindu attitudes to blasphemy and censorship (see Wendy Doniger’s January 22, 2015 Sightings in Sources).

Hawley, John Stratton. A Storm of Songs: India and the Idea of the Bhakti Movement. Cambridge: Harvard University Press, 2015. 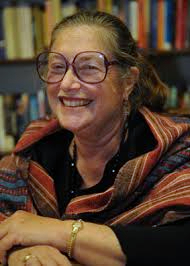 Author, Wendy Doniger, is Mircea Eliade Distinguished Service Professor of the History of Religions at the University of Chicago Divinity School. She also has joint appointments in the Department of South Asian Languages and Civilizations, the Committee on Social Thought, and the College. Her research focuses on Hinduism and mythology. Her courses on Hinduism cover mythology, literature, law, gender, and zoology. She has published almost forty books, has translated three Penguin Classics, and written a novel. Her most recent academic books are The Hindus: An Alternative History (2010), On Hinduism (2014), and Hinduism in The Norton Anthology of World Religions.

To comment: email the Managing Editor, Myriam Renaud, at DivSightings@gmail.com, if you would like it to be added to the article archived on the Marty Center's website, please provide your full name in the body of the email and indicate in the subject line: POST COMMENT TO [title of Sightings piece].