Between or after sessions at Vatican II, a circle of us “guests” were conversing with—which meant “listening to”—the Pope 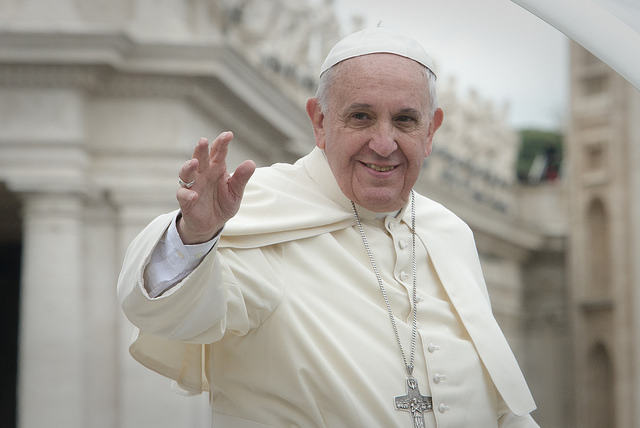 Between or after sessions at Vatican II, a circle of us “guests” were conversing with—which meant “listening to”—the Pope. (How’s that for name-dropping on a wintry day?) In one exchange, as my late colleague Robert M. Grant recalled it, the Pope misidentified him. Grant mumbled to himself and to us, later, “He is making a mistake, and he’s supposed to be infallible?” Grant loved tradition and was not uppity, and he certainly knew what the official definition of “papal infallibility” signaled. While the Catholic Right finds plenty of the “fallible” in Pope Francis, many of us non-Roman Catholics find plenty to affirm in his actions and words.

Such an affirmation does not mean that the Pontiff gets a free ride, especially from journalists and critical historians. We believe that we serve him and Church and world best by honest appraisals. This week count me in among the company of those who believe the Pope made a major mistake in dealing with one issue of priestly (including pontifical) administration: namely, a sexual abuse case. Pope Francis was in Chile, which is not the least uncritical locale for Catholic dealings—the Church is declining in numbers and influence there these years—and, for the most part, served up his usual mix of appealing approaches to personal and ethical issues. Specifically, in this one case, however, he was reported to have “accused victims of Chile’s most notorious pedophile of slander … an astonishing end to a visit meant to help heal the wounds” caused by the sexual abuse scandal.

It turns out that “until he sees proof that Bishop Juan Barros was complicit in covering up the sex crimes of the Rev. Fernando Karadima,” the disgraced and ecclesiastically exiled bad guy, criticizing him amounted to “calumny.” At our geographical, ecclesiastical, and reportorial distance, it is not possible to make a clear case that the Pope was fallibly overstepping here. But a Chilean judge had found Karadima’s victims to be credible, and many sources corroborate their testimony.

If the Pope has difficulties sorting this out, why should the general public presume to comment? I’d begin by saying that the general public would like to hear more. It would be important to know on what grounds the Pope can be true to himself, the Pope as we know him, and then at the same time make such a severe judgment that can be harmful to his causes, including the Chilean church.

Reactions continue. “Pope’s Comments Anger Priest Sex-Abuse Victims in Chile” was a January 19 headline. Ryan Dube’s story begins: “Pope Francis drew anger from victims of clerical sexual abuse in Chile when he said they had slandered a bishop who is accused of covering up molestation of minors.” Rather defiantly the Pope said, “The day that you bring me proof against Bishop Barros, I’ll speak … There isn’t any proof, it is all calumny. Is that clear?” One of the outraged victims asked whether the Pope wanted him to take a selfie while he was being abused and say, “hold it one second while I take a photograph with you abusing me and Bishop Barros standing beside me … How do you do that?”

Please don’t read this as a rush to judgment. But it is a word of caution and puzzlement and hope that this act, which counteracted the good which the Pope’s visit was intended to promote, is uncharacteristic of Pope Francis. I am going to continue to favor him in his pontificate, crossing my fingers while I give him the benefit of the doubt. We’ll await more explanation from him, who remains a hero to so many in a time when heroes and exemplars are few.