Jimmy Carter (and Hope) in the News

“True evangelical hope,” a headline in the current (May 23) Christian Century, drew and held my attention this week 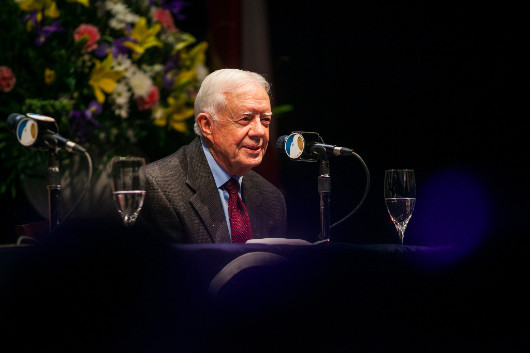 “True evangelical hope,” a headline in the current (May 23) Christian Century, drew and held my attention this week. It signaled an interview by Elizabeth Palmer with President Jimmy Carter. They got right to the point of “evangelical” issues and concerns, and the appearance of Carter in the magazine inspired some backtracking and forward-looking on my part. A casual observer of the news scene in recent years may get the impression that Mr. Carter has been quietly receding from it. One scan of headlines on my computer, however, quickened counter-impressions. Far from being obscured in the shadows—which, we are told, often obscure ninety-three-year-olds—he is a) publicly favored or assailed because of his stance on the Israeli-Palestinian conflict; b) favored or assailed theologically for the contents of his new book on faith; and c) assailed, never favored, by far-right Evangelicals for …

(Readers can fill that last one in.)

As I scrolled through a score or more of the Carter items on the internet, the subject that jumped out most was evangelicalism. No surprise there, given my and this column’s interest in religious topics. But Mr. Carter came on the scene as—in Randall Balmer’s words—the “First Evangelical President,” a designation which shared space in the same 2014 Religion Dispatches headline with a King James Version-sounding phrase: “His Own Received Him Not.” His own?

Mr. Carter the then-Southern Baptist was properly, but briefly, applauded by evangelicals as one of their own. But all that was back when evangelicals were still lowercase-“e” evangelicals, before millions of them capitalized on their newfound cultural and political visibility with new typography—Evangelicalism with a capital “E”—and became a virtual political party, or at least provided the base for one.

As is clear both from the Palmer interview and from the work of Balmer (who knows evangelicalism inside out and top to bottom), Carter has consistently met the criteria for being considered a classical evangelical. Indeed, he was so firmly, boldly, and openly evangelical that he embarrassed many of his fellow Democrats, who differed with him as to the niceties of religious identification. Take down from bookshelves any dictionary of theology published before 1976, when Carter came on the national scene, and look up “evangelicalism,” or visit the regular small-town Sunday School classes which he leads to this day, and you will find that conversionist, born-again, Jesus-the-Redeemer themes dominate.

An Evangelical reference book of today is more likely to deal with twenty-first century cultural topics such as abortion, LGBT issues, religious exclusivism, nationalism, et cetera. Mr. Carter’s Evangelical critics focus on such, adding to them Christian Zionism, pro-Second Amendmentism, and more. This is not to say that the critics are always wrong in their criticisms, or that President Carter is always right in his affirmations. But it is to call for investigation into what of Carter-era and Carter-style “evangelicalism” remains in this time of “Evangelicalism.”

One thing that comes through clearly from reading Palmer, Balmer, and others is that through all the changes and exchanges, the former president at ninety-three still lives by evangelical hope, and hope in general. And he still works hard to see some of that hope realized.

- Palmer, Elizabeth. “Why Jimmy Carter is hopeful.” The Christian Century. May 7, 2018. [Ed. Note: A version of this article appears under the title “True evangelical hope” in the print edition.]

- Turner, John G. “Why Jimmy Carter Was (and Is) a Rare Breed.” Christianity Today. June 16, 2014. [Ed. Note: This article is paywall-protected, available only to subscribers.]