Infallibility: Time To Find Another Term for This Doctrine?

In March of this year, the Swiss Catholic theologian Hans Küng wrote an open letter to Pope Francis asking the pontiff to allow “a&nbsp;free, unprejudiced and open-ended discussion&nbsp;in our church of all the unresolved and suppressed questions connected with the infallibility dogma.” This is not the first time that Küng has sought to encourage open and frank discussion of the doctrine of&nbsp;papal&nbsp;infallibility

In March of this year, the Swiss Catholic theologian Hans Küng wrote an open letter to Pope Francis asking the pontiff to allow “a free, unprejudiced and open-ended discussion in our church of all the unresolved and suppressed questions connected with the infallibility dogma.”

This is not the first time that Küng has sought to encourage open and frank discussion of the doctrine of papal infallibility. He did so in a famous 1968 book and, in large part due to this book, he was eventually deprived by the Vatican of his license to teach as a Catholic theologian. Although some of the more serious and even sympathetic engagements with that book took issue with some technical elements of Küng’s interpretation of the doctrine, it was regarded around the globe as a deep injustice when his right to teach as a Catholic theologian was taken away.

A month after he sent his open letter to the pope, Küng reported that Francis responded both personally and positively to his appeal. This led Küng to say that he would take up the debate on infallibility once again but in the spirit of collaboration, collegiality and freedom that Francis has made possible. Could it be that Küng’s lifelong efforts to encourage constructive and ecumenically-oriented reforms in the Catholic Church are finally getting the serious attention they merit once more? And why does this matter?

As Küng has stated, the doctrine of papal infallibility has overshadowed and impacted many key challenges and issues that have divided the Catholic Church. In the nineteenth century this doctrine became the bedrock of papal power and of ecclesial centralization in Rome. However, this helped bring about a situation where some popes became fearful of being seen to contradict their predecessors and some Church leaders became reluctant to admit that Church teachings (doctrines) undergo development and change over time.

Out of fear, ignorance or confusion, theologians and Church leaders alike have tip-toed around the issue of infallibility and missed countless opportunities for honest and open discussion and debate on Church matters of fundamental importance. The result: much Catholic theology and even Church teachings all too often became timid and at times seemed irrelevant to the needs of today’s world.

This forced and misleading sense of timeless continuity has particularly straightjacketed much Church life and theological enquiry in the decades since Küng’s 1968 book. It has led to the persecution and isolation of scholars and pastoral servants of the Church and to a period dominated by fear and control. It has led to generations of Catholics growing up with an erroneous understanding of aspects of their faith because they were told that modern innovations and glosses were actually centuries-old ‘traditional’ components of Catholicism. It has also been a major stumbling block for ecumenical relations.

And yet the doctrine of infallibility is largely misunderstood by the vast majority of Catholics—even among all too many theologians and scholars.

During the late eighteenth and nineteenth centuries, the Roman Catholic Church experienced a loss of its temporal power. Revolutions in intellectual, social and cultural life also impacted the Church’s authority and influence (including from internal movements and theological ideas, as well as from the advance of liberalism and secularism beyond the Church). To counterbalance these challenges, key Church authorities decided to emphasize the spiritual and doctrinal authority of the pope and Rome in stark and uncompromising terms.

But the manner in which papal infallibility came to be understood was, in many ways, a nineteenth century novelty. Even at the First Vatican Council (1869-70), the bishops who attended were deeply divided over the issue of papal infallibility. Nonetheless, even that council framed its final understanding of the doctrine in the most guarded and qualified of terms.

Yet, in the century that followed, many people erroneously confused infallibility either with qualities enjoyed by the person of the pope himself, and/or by the Church teachings themselves. From there it was a short step to thinking that everything a pope said had to be accepted without challenge and that teachings could never be questioned or modified. Yet the doctrine as framed in modern times itself actually refers to the teaching judgments about the truth or otherwise of particular beliefs in the Church. In other words, it is neither the pope personally nor the proposition contained in a particular doctrine that enjoys the gift of infallibility.

The context is much wider in the sense of judgments made by or on behalf of the whole Church in relation to the confidence held in the enduring truth of certain core beliefs. Pope Francis has underlined this—the only time he has ever used the term ‘infallibility’ was in reference to the entire people of God as he rehabilitated that wonderful phrase from Vatican II.

The sense of ‘infallibility’ essentially is a pointer toward the way through which a key aspect of Catholic faith is believed to have been identified, offered and taught. Ultimately, it refers to a confidence in God’s promise to the collective Church. The Church as a whole has been given the gift of infallibility, according to the Church’s own authoritative teachings on the topic. It concerns how the Church, as a whole, responds to the gracious self-communication of the God of love.

So one could rather say that infallibility refers to a partial articulation of that wider belief that the Holy Spirit ‘maintains’ (or ‘assists’) the Church in its quest to understand, bear witness to, and put into practice the fundamental truths of the gospel and the wider revealed truths of the faith. Catholicism teaches that the Spirit is present in and with the Church in that quest.

The notion of infallibility, then, is actually both an affirmation and continuation of the faith itself—it is a statement about what Catholics believe concerning the enduring relationship between the Church and the God of love made manifest in Jesus Christ and who endures in presence through the Spirit. It is a logical conclusion drawn from the fact that the faith in God and the promises revealed by God, in Christ and through the Spirit are true and therefore that the Church entire could not collectively be consistently mistaken about the nature of that truth. It is inseparably bound up with both the sense of the faith and the resultant sensus fidelium (sense of the faithful) despite some studies overlooking or underplaying this fact.

The problem is that all too much of the official magisterial discourse (and so thinking and practice) of the Church, in the second decade of the twenty-first century, continues to be trapped in a neo-scholastic language game that has not and does not serve its fulfillment of the gospel mission well at all.

There must be a better way, in the twenty-first century, of explaining this technical description relating to the most important group of the Church’s teachings—a different way of explaining and communicating such important doctrinal processes.

Rather than juridical logic, it would be would be more helpful for Church leaders and theologians to explain this notion in existential and relational language. Like Küng, I hope that the Church, in the not too distant future, will articulate such important beliefs without reference to the confusing term infallibility. Just as language is constantly changing and evolving, so also must the Church’s language reflect changes and developments in order to remain intelligible. Church history makes clear that key terms, beliefs and concepts are regularly translated anew into differing epistemological, existential and cultural frameworks.

For much too long, Küng has had to endure the familiar fate of the prophet. And to paraphrase, like a prophet, he has often not simply been without honor in his own country, but also within much of his own religious community and profession. Fr Küng is not a radical outsider who should be shunned—rather, he too often has been the lone voice crying in the wilderness—a voice that should have been listened to much sooner. There is no doubt that he cares passionately about the Church and its well-being—precisely the reason he has borne the burden of being that lonely voice for so long.

Küng is surely right that the time has come to ‘re-vision’ this doctrine. Indeed, I would suggest the time has come to reimagine and re-envision the entire system of ecclesial magisterium—how Catholic Church teaching authority is understood and practiced. Revisiting and reimagining the notion of infallibility will form a vital part of such an overhaul of the entire magisterial system—something necessary in order for the Church to flourish in its global and constructive gospel mission today and long into the future.

Gaillardetz, Richard A. Witnesses to the Faith: Community, Infallibility and the Ordinary Magisterium of Bishops. Mahwah, NJ: Paulist Press, 1992.

Pottmeyer, Hermann. Towards a Papacy in Communion: Perspectives from Vatican Councils I & II. New York: Crossroad, 1998.

Murray, Robert. “Who or What is Infallible?” In Infallibility in the Church: An Anglican-Catholic Dialogue, edited by A. M. Farrer, 24-46. London: DLT, 1968.

Houtepen, Anton. “A Hundred Years after Vatican I: Some Light on the Concept of Infallibility.” In Truth and Certainty, edited by Edward Schillebeeckx and Bas van Iersel. Vol. 83 of Concilium, 117-128. New York: Herder and Herder, 1973.

Rahner, Karl. “On The Concept Of Infallibility in Catholic Theology.” In Ecclesiology, Questions in the Church, the Church and the World. Vol. XIV of Theological Investigations. London: DLT, 1976. 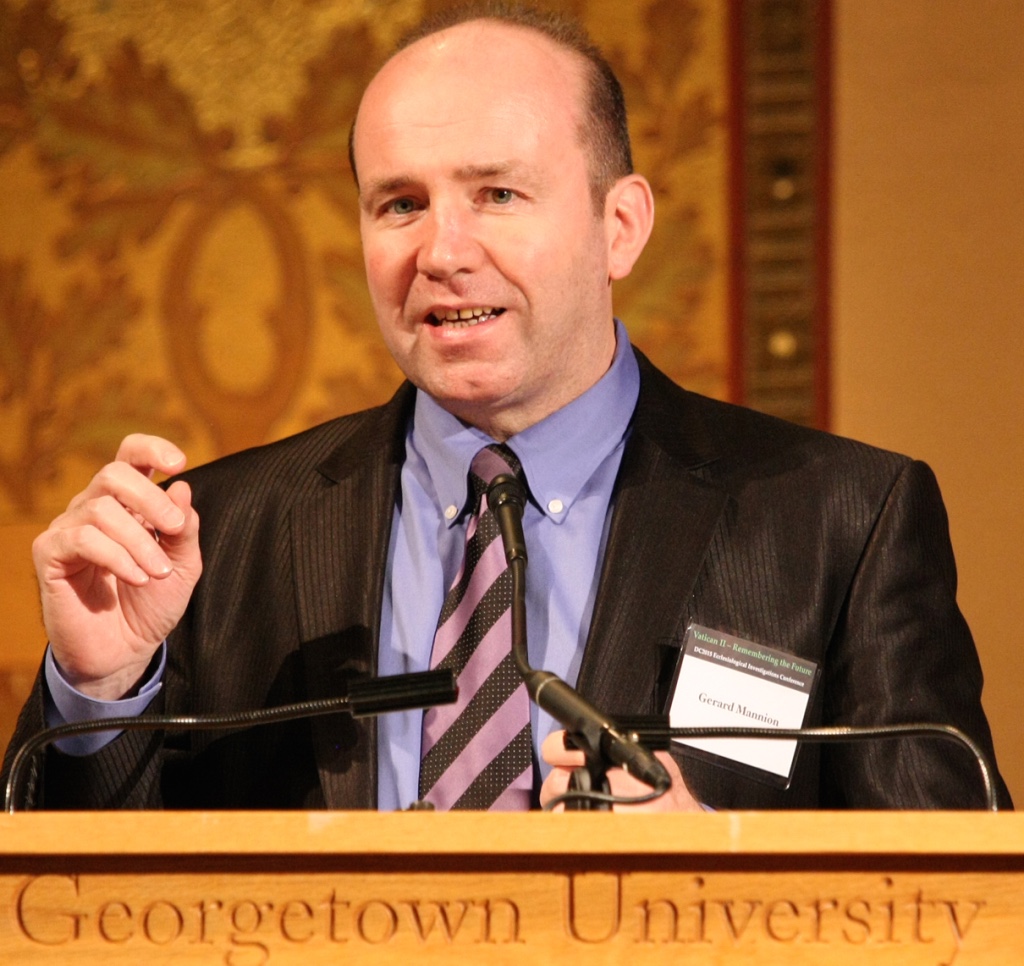 Author, Gerard Mannion, (D.Phil. in Theology and Philosophy, Oxford University) holds the Joseph and Winifred Amaturo Chair in Catholic Studies at Georgetown University. He is also a Senior Research Fellow of the Berkley Center for Religion, Peace and World Affairs, Co-Director of its Church and World Program and he heads the ‘Church and the Ecumenical Future’ project. Founding Chair of the ecumenical Ecclesiological Investigations International Research Network, Mannion has authored, co-authored and edited some seventeen books and numerous articles and chapters in the fields of ecclesiology, ethics and public theology as well as other aspects of systematic theology and philosophy.

See All Articles by Gerard Mannion