For years, people have been asking me what I will do if the Chicago Cubs ever win the World Series 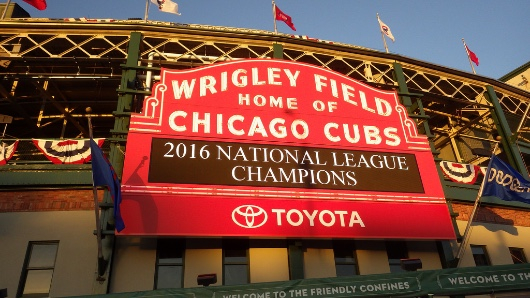 For years, people have been asking me what I will do if the Chicago Cubs ever win the World Series. I don't actually know. The closest I've come to what that moment might be like was when the Cubs won the National League Division Series against the Cardinals in 2015. I was as surprised as anyone when I burst into tears on the spot, overwhelmed by emotion. It was the biggest game at which I had been in the ballpark, caught up not only in my own excitement but in the energy of the crowd, participating in a roar of joy in which I could not distinguish my own voice. Émile Durkheim would call this "collective effervescence," and he would point out that those present had entered a sacred time/space, from which we would return the next morning to our profane lives and realize the everyday bodiliness of them in contrast to the spiritual experience of that moment at the end of the game.

As an anthropologist, I am accustomed to writing about sports this way. Durkheim's Elementary Forms and sports go together like a 6-4-3 double play. Recently, though, a special issue of HAU: Journal of Ethnographic Theory led me to revisit the life of a Cubs fan. The special issue deals with happiness, and Joel Robbins's afterword reflects on the dichotomy in the issue between articles on ephemeral moments of joy and those assessing the long-term happiness of a "good life." Robbins asks "if in fact the contributors do routinely conflate two different things under the term 'happiness.'" He rejects this idea to posit that "we can find a core element shared by these two kinds of happiness, and that this core has crucially to do with the way both kinds of happiness involve values." I propose to illustrate this piece of his argument via the long-suffering of Cubs fans.

To connect values to joy, Robbins points out that "effervescence attends not only the revelation of a value, but also the performative realization of it." In other words, my sudden tears were both about how much I cared about the Cubs winning the game, and about everyone around me realizing through our actions that we all cared, that we were sharing something larger than ourselves. The shared thing seems trivial: a sports team. But the sports team is a social lubricant, a thing relative strangers can talk about to form connections, a source of excuses for friends to gather. The Cubs are the representation of our connections to one another, "realized... in the performance of a concrete activity." The games make concrete the often-inchoate links we share with others.

The ability of sports to facilitate social ties illustrates well how Robbins connects moments of joy to a life well lived. Drawing on Erving Goffman and Randall Collins, Robbins observes that social interactions have a ritualistic quality. When they go smoothly, participants experience satisfaction, "at least some effervescence ... [and] some quantum of the kind of happiness that we have tied to the disclosure and realization of values." Imagine a new coworker in an office who proposes a visit to the bar on the corner to watch the game after work. If her colleagues accept, she experiences the pleasure of being part of the group, of working in an environment with others who share her enjoyments. This feeling persists even if the Cubs lose, possibly amplified over postgame pints. Robbins argues, "We might take a life well lived to be one that produces a steady flow of effervescence by virtue of moving regularly through a wide range of successful interactions across the life-course."

The Cubs fan gets that frisson of effervescence when among fellow fans, watching the games season after season, occasionally swept away by a stunning win when the place explodes with full-on collective effervescence, all of which contributes to a general sense of satisfaction with life. For someone else, the same experience might be had through another passion or commitment. What Robbins's argument highlights is the idea that a life well lived relies on others, on evincing at least respect for what we value, a little indulgence for the elderly man retelling the story of buying his first car, or the kid explaining snails in excruciating detail, or if I am so lucky, the woman bursting into tears at the end of the World Series.

See All Articles by Holly Swyers