How Not to Be a Feckless Moral Hustler

Imagine the scene: Liuxia Zhi, a self-made entrepreneur, looked up to by thousands of people, has had his hard-earned afternoon meal interrupted by a con man who tries to give him business tips. From Zhi’s point of view, his uninvited guest is more than just another failed competitor: this grifter ruins those who trust him, and deserves the strongest condemnation. Unlike his would-be new advisor, Zhi delivers reliable results and has helped countless followers find profit and protection under his care. That his “business” is technically robbery and murder doesn’t change this fact, nor does the presence of fine sliced human liver at his table. The cheap and shifty guest who seeks this crime lord’s patronage, meanwhile, is none other than Confucius—the supposed embodiment of moral sensitivity and purpose.

This story comes from the Zhuangzi, an offbeat and countercultural anthology from early China. The “Robber Zhi” dialogue is one of the Zhuangzi’s most famous contributions to political satire, and its original target is open to speculation. To begin engaging its themes in our own time and place, I think we can say that its target is us, to the extent that we act like Confucius or value those who do. “Confucius” in this story plausibly represents anyone who motivates people to improve themselves, to do the right thing, to hold our leaders to account—without ensuring any concrete benefits for doing so. Zhi’s misdeeds are obvious, but from his perspective Confucius stands for even worse: through posing as a moral critic and reformer, he inspires people to fight against a brutal status quo in ineffective ways that wind up hurting them instead of it.

Central to the mythos surrounding Confucius is the idea that he and his followers endured poverty, rejection, and even mortal danger in their quest to “educate” the ruling class, and that it took centuries for his movement to have more than incidental impact on society. It’s possible to read such unrelenting efforts as heroic, and to focus on the honors that such activists deserved rather than the happiness they were in fact denied throughout their lives. Presumably this story’s version of Confucius would prefer to imagine his disciple Zilu still alive, instead of hanging pickled in the citadel of the lord whom Zilu dared to confront as unrighteous. He’d certainly prefer to imagine the dozen rulers who ignored, dismissed, or threatened him as better men than they actually are—why else would he keep trying to change them, let alone assuming he could gain an inch from the likes of Robber Zhi? Above all, perhaps, he’d prefer to imagine himself as someone other people listen to about important matters. But all Zhi can see is someone who holds out hope for positions of influence in the very system that punishes him and his followers for trying to influence it.

Robber Zhi thinks that people who want to make the world a better place face a severe “order of operations” problem. For him, the fundamental truth about us is that we’re fragile, sensual beings with limited capacities for understanding anything beyond what gratifies or frightens us. Our activities are most sustainable and realistic when they’re grounded in what we ourselves enjoy; trying to improve conditions for one, or two, or several other people that we actually know is not necessarily burdensome, but the burden increases as those numbers do. The more committed we become to large-scale social outcomes and agendas, the less attention we’re able to reserve for satisfying or even understanding our own needs. This progressively uproots us from ourselves, to use Zhi’s imagery, making us playthings of social forces we can neither comprehend nor control—and leading not just to anxiety, exhaustion, anger, and confusion, but also to unwitting participation in the proxy wars of rival elites.

The problem of over-investment in projects that supposedly bring benefits to everyone becomes particularly acute when we find ourselves engaging in struggle as something like an end in itself, rather than as a means toward positive outcomes we can realistically expect. In a social landscape that offers generous rewards for partisanship, confronting confrontational people and performing public acts of refutation and shaming takes on a life of its own; the sheer difficulty and exhaustion involved can seem like proof that noble work is being done, even in the absence of any observable changes for the better. While such hardships are normally much less dramatic than the threats to life and limb that Confucius brings upon himself, in both cases we see a tendency toward finding sacrifice and martyrdom inspiring—toward hoping that with sufficient pain and effort we can make a better world eventually, even if that means choosing not to enjoy what there is to enjoy right now.

Zhi sees Confucius as a con man because he promises that pains and efforts taken are repaid—if not in actual changes for the better, then in the worthiness of people who deplete themselves for worthy causes. Unlike predators who simply take our stuff or kill us, tireless idealists make it seem admirable to refuse to take care of ourselves, to stir up conflict with people who might otherwise support us, to lead our own friends and family into disaster—so long as we can justify it by appeals to better worlds that we might never live to see. Zhi finds it particularly disgusting when someone makes their living from doing this, profiting materially and socially from their audience’s willingness to put their personal happiness on hold while seeking membership in a just and fair (hence non-existent) social order.

The “Robber Zhi” dialogue is written partly to be funny; both characters are grotesque in their respective ways, and it’s far from evident that we’re supposed to pick a side. I think the most helpful way to take Zhi’s point is to present it as a question: “Who exactly benefits, in concrete and verifiable terms, from your participation in collective moral projects? When those projects feature charismatic leaders and opportunities for gain, what assurance can you find that any given representative is not a pawn, a victim of a pyramid scheme, or indeed a would-be victimizer?” In many cases, you or those you’re aiming to help will be beneficiaries, but to insist that this is true without carefully considering the fragile and sensitive individuals involved risks falling into the kind of confidence game that offers pain and effort as the proof of noble work.

Very few of us are apex predators like Zhi, and he stands for a level of selfish calculation that is hard to find relatable. But the fact remains that unless, like him, we keep our bottom line in mind—knowing clearly what our bodies and appetites like, what we can and cannot do—we’re less effective in the long run at helping whomever we wish to help. Measurable results, in terms that we ourselves can have a taste for, are worth much more to us than dubious results in terms laid down by someone else. The brutal power-brokers that we’re most concerned to influence certainly live by that rule, and to the extent that we can influence them, it’s only with the help of leverage, deals, and strategies that predators appreciate. This makes each person’s inner predator an indispensable ally, not an enemy, of sustainable change for the better. 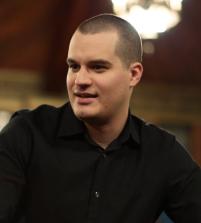 Author, Stephen C. Walker (PhD ’19), teaches at the University of Chicago and DePaul University. His research focuses on classical Chinese thought, and particularly on the Zhuangzi’s paradoxical responses to our ordinary ways of seeking guidance.