“I have always thought what is needed is the development of people who are interested not in being leaders as much as developing leadership among other people.”&nbsp;- Ella J

“I have always thought what is needed is the development of people who are interested not in being leaders as much as developing leadership among other people.” - Ella J. Baker

American higher education is in crisis. Public conversations on the state of the university range from nostalgia for an idyllic Nineteenth Century college on the hill to outright dismissal of the university in favor of new flows of knowledge and learning facilitated by new technologies.

Yet, our conversations fail to hit a critical register and are rarely linked with a broader crisis of American democracy. The limited scope of how and in what ways we engage the crisis of higher education bespeaks of the arrested state of a properly moral vision of higher education.

To speak of a moral vision of higher education should not be construed as a veiled call for a return to a traditional moral conception of education grounded in a particularly Christian rendering of God, society, and humanity. Rather, it is a call for a broader vision of human being and belonging in a world intimately shaped by an ethic of hospitality, which welcomes new possibilities for life and human existence.

If we are to create a moral vision that will support the noble strivings of higher education while nurturing a robust democratic polity, we can do no better than turn to those most embattled higher educational institutions which continue to struggle for democracy—our nation’s Historically Black Colleges and Universities (HBCUs).

The turn to HBCUs is warranted less by their presence as a reminder of the nation’s pervasive history and practice of white supremacy, than by the hope-filled vision of democratic possibility that they continue to represent. This vision offers a genuine opportunity to reorient higher education from a position of crisis to one of commitment that truly embraces the creative potential of human possibility and democratic renewal.

Indeed, at the height of the modern black freedom movement the distinguished historian of religion Charles H. Long eloquently captured this sentiment: “The visibility of the black community in America is our challenge and opportunity to develop...a freedom for humanity—a new humanity.”

Unfortunately, recent media attention about the state of our nation’s HBCUs overshadows the possibilities they represent for democratic renewal. From declining enrollments, budget cuts, political challenges, and closings, HBCUs are framed within a discourse of peril rather than of promise.

This is not to diminish the challenges that these institutions face, but the presence and persistence of HBCUs against daunting odds speaks to key ideas. At their core, these institutions represent a foundational commitment to the dignity and variety of the human personality.

Enduring a history of state sanctioned segregation and culturally normalized dehumanization, HBCUs cultivated an ethos in which a politics of recognition was not one of mere presence, but, more profoundly, of possibility.

A fierce allegiance to access and opportunity are more than just rhetorical flourishes or marketing slogans for HBCUs. These words signal an abiding moral commitment to an ideal best expressed by the Peruvian theologian Gustavo Gutiérrez, “Even the poor have a right to think.”

The ideal that all persons, particularly those on the margins of society, have the right to think forces a reordering of people and things. In undertaking the work of educating the socially ostracized and politically marginalized, HBCUs are the institutional expression of this ideal.

These schools serve as the mediums in and through which generations of those unaccounted for in the dominant regime of thought and political order construct and enact bold conceptions of democracy, which are perennially renewed by the new thoughts, fresh images, and novel expressions of those whose humanity is restored by the recognition and affirmation of their right to think.

HBCUs offer a vision for the entire higher educational landscape to emulate, which is to embrace a foundational identity and commitment grounded in and reflective of the deep diversity of the human experience. Higher educational institutions can serve as schools of deep democracy by promoting and fostering communities of compassion, caring, and creativity.

The presence of HBCUs is also significant because they underscore the key principle of a democratic critique necessary for a healthy and progressive polity. HBCUs have served and continue to serve as spaces, which nurture honest criticism of American democracy.

To be sure, HBCUs have been the object of such criticism which indeed they must since this is the function of criticism.

It is none other than HBCU Fisk University graduate, W. E. B. Du Bois who best articulates the depth and meaning of such a criticism. In his essay critiquing the educational philosophy of Booker T. Washington in his 1903 The Souls of Black Folk, Du Bois writes, “Honest and earnest criticism from those whose interests are most nearly touched,— criticism of writers by readers,— this is the soul of democracy and the safeguard of modern society.”

If American higher education is to cultivate a capacity to respond to its crisis and renew the “soul of democracy,” it must serve as a model in providing new generations the space for the development of such a democratic criticism.

These spaces have been and continue to be located in our nation’s HBCUs.

Davidson, Cathy. “If Academe is Part of the Problem of Inequality and Oligarchy, What is the Solution? #FuturesEd.” HASTAC: Humanities, Arts, Science, and Technology Alliance and Collaboratory, February 24, 2015, Scholars blog posts. http://www.hastac.org/blogs/cathy-davidson/2015/02/24/if-academe-part-problem-inequality-and-oligarchy-what-solution-futur. 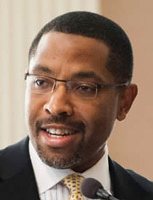 Author, Corey D. B. Walker, is Dean of the College and John W. and Anna Hodgin Hanes Professor of the Humanities at Winston-Salem State University.  He has published widely in the area of African American and American social, political and religious thought and public life and has recently completed a new book, Between Transcendence and History:  An Essay on Religion and the Future of Democracy in America.@WSSUDeanWalker.

See All Articles by Corey D. B. Walker