A Community Near and Far

Liverpool and Manchester United, two of the largest and most popular soccer clubs in the world, were scheduled to play on Sunday, May 2. The day of the match, thousands of United supporters gathered around the stadium to protest, blocking the players’ entrance to the stadium; another protest surrounded the local hotel where the players were staying, preventing the teams from leaving. Eventually, some fans at the stadium overran barriers and made their way into the stadium and onto the pitch. A few hours after the match was scheduled to begin, league officials announced that it would be postponed to a later date. It was the first time in the history of English soccer that a fan protest caused the postponement of a top flight match.

The protestors’ complaints were focused on the stewardship of Manchester United by its American owners, the Glazer family. There have been smaller protests ever since the Glazer’s completed their leveraged buyout in 2005. The leveraged buyout put the club into debt for the first time. It has remained in debt ever since. However, it was the short-lived European Super League that pushed things over the top.

European soccer, generally, and English soccer, in particular, are open professional leagues. This means that at the conclusion of each season, the teams that finish at the bottom of the standings are relegated to a lower league and replaced by the lower league’s best teams. It trickles down so far that in theory, you could gather friends and field a Sunday afternoon pub team and win enough games to find yourself in the top league in the country. The English system provides the opportunity for the American equivalent of the minor league baseball team of my youth, the Hickory Crawdads, winning their way into the major leagues.

Over the past twenty years the amount of money leagues and clubs are paid to broadcast their matches has exploded, driven by global demand and global fans. Once hard to fathom, there are now millions of fans around the world who have deep connections to formerly very local soccer clubs. Arsenal, a soccer club formed in London by munition workers at the Royal Arsenal in 1886, now has millions of dedicated supporters in Asia and in the Americas who will wake up early and stay up late to watch every match.

The Super League was a breakaway attempt by twelve of the most successful clubs in Europe to establish a closed league. The stated goal of the league was to form a league with 20 teams where only the best teams in England, Italy, Spain, Germany, and France would play one another. The rationale was that the Super League would create more glamorous matchups than the usual domestic schedules, and thus generate greater television revenue. There would presumably be more opportunities to televise Christian Ronaldo and the Italian Juventus against Leonel Messi’s F.C. Barcelona, rather than Manchester City against Brighton and Hove Albion F.C.

The protests around England brought to light a growing tension in the sport between the local and the global fan. The global fan has brought increased television revenue that is in turn put into clubs to create higher quality teams. The local fan has breathed life into stadiums and pubs that has made televised soccer a compelling television product. The tension is that the longstanding traditions of the local fan—perhaps a century old rivalry with a currently lower division club in the same town—don’t mean as much to the global fan who has a greater affinity to more glamorous matches.

The backlash from local fans to the European Super League has been so strong that most clubs pulled out of the enterprise within 48 hours of the May 2 protest. Notably, all the English clubs have abandoned the plans entirely. In this round of the fight between the local fan and the global fan, it seems that the local supporters have won.

What, then, has all of this to do with religion? Beyond the oft-posited similarities between religion and sporting events, many religious communities have been navigating a perhaps analogous tension between the local and the global in their worship as a result of the pandemic. These tensions will only increase as life slowly begins to return to normal. Religious leaders are now entering the next most difficult phase of the pandemic. It does not seem that the CDC will declare a resounding “all clear” in attempts to return to regular, indoor worship. Instead, it appears that there will be a season of gray, all its own.

While some are eager to return indoors and in person, there are many congregations that are not ready to abandon the online presence they have developed. I am a campus pastor, and the young adults in my community want absolutely nothing to do with video conferencing whenever it is not an academic requirement. Throughout the pandemic I have been surprised to hear my congregational colleagues at other institutions talk about how positive an experience online worship has been in their communities. Some have found that online attendance and engagement has actually risen among existing members. Longtime members of congregations who had moved away have been able to return to regular worship with the communities they had left. Other congregations have found ways to connect with new and geographically distant worshippers during the pandemic. How will these communities return to in-person services while continuing to support those who rely on the technologies of distance?

At the beginning of this new season of gray, there is much conversation about how congregations might return to in person worship while not abandoning their online services. Much of the hard work ahead of religious leaders is finding a path forward with “hybrid worship.” I do not know exactly how the tensions between the needs of the remote and the local congregant will be resolved, though we might expect that some congregations will be more ready to adapt and grow than others; for instance, we might see in this phenomenon the shadows of the conflicts that emerged from the bifurcation of Christian worship services into “traditional” and “contemporary.” I suspect many will find a path to hybrid worship with integrity, but it will not come easily and it will not come without valid tensions.

The European Super League failed because of the impassioned demonstrations of local supporters, but also because of the unexpected outcry among the global fans the move attempted to please. Owners were surprised that global fans were much more invested in the interests of the local community than in an improved international television product. Fortunately, the move towards hybrid worship will not be decided by a monied few. For religious leaders there is opportunity to avoid the Super League’s pitfalls. Through careful listening to both the local and global congregation, motivated by well-being of the whole, we might find creative solutions that meet the community’s needs as we move into the next phase of Coronatide. 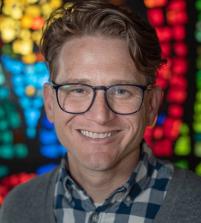 Author, Zach Parris, is the Lutheran campus pastor at the University of Colorado, where he works with a student community called “Bread+Belonging” supported by the Evangelical Lutheran Church in America and the Episcopal Church. He is also the co-host of the weekly and award-winning lectionary podcast, The Vinyl Preacher.

See All Articles by Zach Parris