Blessed are Those Who Do Not See and Yet Believe

The moral force of misrecognition

Last August, I read a piece by Jon Baskin in the New York Review of Books that stuck with me. Baskin’s essay offers a reflection toward an “antifascist aesthetic,” taking its point of departure from some lukewarm film reviews that misrecognize the point of Terrence Malik’s A Hidden Life.

The film follows Franz Jägerstätter, a farmer from a small Austrian village, whose life of unremarkable anonymity collides with the rise of National Socialism. On the surface, he is indistinguishable from countless others who consented to being enveloped by the Third Reich—even his own clergy. Yet, at some point, by someone, there is a failure of recognition. Baskin writes that when Franz finds himself with countless countrymen ushered to a military camp, he “watches quizzically as the recruits are shown filmed images—projected on an outdoor screen—of Nazis marching victoriously through foreign cities in flames. But the propaganda has the opposite of the effect it is supposed to have on Franz. When he is called to fight again, Franz informs the recruiters that he won’t go. Later, he resolves not to serve Hitler in any way.”

Critics dinged the film in part for its lack of historical or political specificity. Baskin cites The New York Times’ A.O. Scott, who complains that Nazism is represented as “a matter of symbols and attitudes and stock images rather than specifically mobilized hatreds.” For Baskin, however, this is precisely the point. Malik “thematizes the ‘symbols and attitudes’ of Nazism because he perceives how central these were to the appeal of Nazism itself,” that the perceived “goodness” of Nazism was “as much about its symbols and attitudes as it was about its policies and actions.” Here, Baskin is referring back to Karl Ove Knausgård’s observation that the appeal of a Nazi rally was rooted in an emotion stronger than analysis, a kind of being beyond politics, something that—above all—feels good: “What moved them… was not the Nazis’ promise to redistribute income, or Hitler’s analysis of world affairs, or even, initially, their hatred of the Jews. What moved them was, rather, the joyful feeling of togetherness and community.” In a word, a feeling of belonging—one to which Franz was strangely impervious. What is it that Franz saw that other people didn’t? Or what did he not see that other people did?

Ordinarily, ethics is mediated by recognition. Recognition implies that there is something shared by object and subject that revolutionizes the relationship between the two. I see another as an object, but when I see something in them that I also know as part of myself, they become a fellow subject, and I become aware of myself as an object in their world. When I recognize other people and feel myself “seen,” the world makes more sense, and I feel like I belong here.

Recognition has its place. Yet I’m convinced that misrecognition holds the potential for the really good stuff. Misrecognition happens when someone feels themselves subjectively called forth by a system of signs in which they are normatively unrecognized, marginal, or part of the background. It’s like that proverbially embarrassing moment when you wave back at someone who’s really waving to someone else behind you. Or, to take a biblical example, it’s like the Ethiopian eunuch who asks Philip, “What is to prevent me from being baptized?” Of course, misrecognition occurs in the other direction too, like when someone assumes another to be “like them” and remains completely blind to what is unique, challenging, profound, or dangerous about the other.

Perhaps I was drawn to Franz because, in Baskin’s rendering, I recognized an echo of my most deeply-cherished source: my own father, Norm, who died from a rare form of dementia in 2014. He was a carpenter, a Navy veteran, a church janitor and eventually a grocery bagger, a white working class man from a white working class enclave south of Boston who, according to demographics, had no business being the one person who gave me my earliest lessons about the racism permeating American life.

Due to a separate series of curiosities, he and my mother raised me in a white working class enclave of southwest Florida, a world becoming oversaturated with Evangelicalism and conservative politics. My memories of that time and place feel like a warm bath with a cold current. The world around the church was culturally total: religion, education, culture, fashion, all in one place. Occultic language games mediated recognition and made you feel safe there—so long as you didn’t wear the wrong clothes or play the wrong music. So my dad also had no business teaching me to play sports or love the old rhythm and blues, spinning rock’n’roll records so my little friends and I could dance barefoot on the cold garage floor. Yet he did so with a light confidence, so deliberately oblivious to the prospect of controversy that somehow everyone else pretended to be oblivious, too.

The hinges distinguishing white Evangelical culture from Republican politics tightened toward the turn of the millennium, making it virtually unthinkable for anyone in the community to vote for the other party. Yet there was my dad, four years later, designing his own personal protest against George W. Bush’s Iraq war by wearing red every Monday. There was my dad, eight years later, getting to church before everyone else to set up the coffee and lay out the cookies, mentioning offhand that he’d voted for Barack Obama. This time, people weren’t oblivious. But they were silent, I suppose like one is silent before the man conversing with himself on the subway.

What can be said about such a person? Memory indulges in artistic liberties, and my memory registers this man’s existence as a kind of miracle: a suspension of the laws of recognition with no violence and little fanfare, like a poppy growing up in a lavender field.

One thing that was recognizable about him, that no one could impeach, was his Christianity: his simple, unintellectual yet thoughtful commitment to the teachings of the Bible and Jesus Christ. Was it that he misrecognized those teachings, saw them as calling him to do things and to be someone inscrutable to other people who heard the same sermons? Or was it that he misrecognized the intended recipients of those teachings, naturally relating scriptural signs to people and things who existed beyond the bounds of the community? Or is it that he registered a different economy of recognition altogether—that, in Carl Schmitt’s terms, he somehow failed to relate “legibility” to the easy categories of “friend” and “enemy”?

My work as a theologian is motivated by many things, I’m sure, some of which exceed my consciousness. But I do know that I am endlessly captivated by people like Franz, people like my dad—by the question of what they see or hear that seems to evade everyone else. What leads a person refuse the lure of fusing their identity with the image of safety, to prefer a kind of inarticulate responsibility to those before whom they remain unseen? One thing I do know is that this kind of goodness beyond goodness has little to do with relative education, advantage, or logical argumentation. But if I am able to somehow conjure the gentle power of misrecognition—or, perhaps, the sacredness of a self who knows itself primarily through its relation to the unrecognizable—perhaps my work might speak to something worthy. 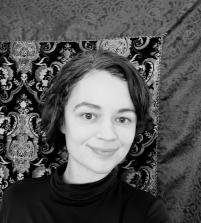 Author, Michelle C. Sanchez, is associate professor of theology at Harvard Divinity School, where she teaches courses on the Protestant Reformations, Protestant theologies, and critical theories of secularization. Her first book, Calvin and the Resignification of the World, came out in 2019 with Cambridge University Press. Her second book, currently in draft, looks at the theological adaptation of "worldview" by late nineteenth-century Neo-Calvinists, with an eye to its anthropological, cultural, and political impact.