After the "Charlie Hebdo" Massacre: Islam Must Open Itself To Critique -- Jean-Luc Marion

This article was originally published in French in&nbsp;Le Point

This article was originally published in French in Le Point. It was translated by Myriam Renaud.

France is at war; we can no longer doubt that this is the case. But this war has at least three fronts.

The first front is obvious: an act of war occurred in Paris, against a magazine, leaving more than a dozen dead. The government and the nation have started to respond. The government is taking up its principal role—the protection of citizens, handling the security concerns with which it has been entrusted. It is acting as quickly and as well as it can.

As for the nation, we have already witnessed that, far from crumbling and yielding to fear, it is uniting. A republican reflex will bolster this coming together, and extremists will not benefit in the slightest from the crisis.

Finally, the danger posed by Islam is not new—it is familiar to France since the Seventeenth-Century. In fact, the history of France proves that such wars have already been waged and won. The recent history of Europe confirms that democracies eventually vanquish totalitarianism and fascism. Thus, this front will hold. However, when it comes to the other two, nothing is certain.

The second front comes into view as soon as one considers that the attack targeted a political and satirical newspaper that caricatured (I underscore this point) all of the religions, based on the principle that one can laugh about anything “and mock everything else.”

If this newspaper was tolerated and even supported by the public, although it was often shocking, it owed this to a fundamental and ancient trait of French society—the freedom to think and to speak—first secured under the Ancien Régime. It rose to the level of principle in the Declaration of the Rights of Man, took effect when all legislation against blasphemy was abolished at the beginning of the Nineteenth-Century, and was reinforced by the law separating Church and State.

In a way, this crime targeted a central tenet of French society: secularism. Here the second front opens out. What is secularism worth today? We must recognize the ambiguity of this concept and its application. Because, if the State is secular, society is not.

More exactly: the State must be secular (it must refrain from showing favoritism for any particular religion, permit them all to exist under the protection of the law, showing a preference neither for religious belief, nor for unbelief), a stance that I hope no one contests.

But society is not secular and cannot be secular, because upon becoming citizens, men and women do not lose their freedom of conscience—their religious freedom—but, on the contrary, exercise it fully. Besides, the neutrality of the State must never be based on neutralization, forced or tacit, of the religious dimensions of the real men and women who make up society.

However, “French-style secularism” has too often tended to understand itself and to comport itself like an army fending off the religions (especially Catholicism), behaving as if it were another religion, substituting itself, in the name of Reason, for the historical religions. Today, this tendency reveals itself in so-called “social” reforms, more or less imposed on people who are more or less in agreement, manipulated or simply ignored.

This tendency is sometimes imposed on Christians but also Jews and henceforth, on Muslims, as a secularism of prohibition, of punishment, even of repression.

The second front consists of, and is much more difficult to secure than the first front, a reformation of the secular pact in France (and thus in Europe). To defend secularism, an emergency no one debates, we must redefine it, in positive terms, and not as a constraint. Because we can’t require all of France’s citizens to emasculate themselves religiously.

This is a problem with which we’ve struggled for the past twenty years. Will we know how to address it? It seems to me doubtful that French politicians, still extremely ideological and rather ignorant on the question of religion, are capable of this today.

There is also the third front, the most difficult of the three. The terrorist attacks have a common, though hazy, cultural and political origin: the world of Islam. To recognize this is not equivalent to a facile rallying to the banner of “culture wars,” or lack of integration, or discrimination. It merely entails acknowledging that our fellow citizens of Muslim faith (and also acknowledging, one hopes, that this is the case for a majority of the world’s Muslims) suffer from a terrible situation.

The situation can be summed up in this way: the religions demonstrate their excellence only by allowing—and even better, by choosing, for themselves, to undergo the ordeal of self-critique—tests of their religious validity. Religions that do not do this either disappear or degrade ideologically.

Islam has not yet opened itself up to a close analysis (including philological analysis to understand how its texts came into being, an assessment of the interpretations of these texts, in-depth research into their actual religious history, etc.) for historic reasons which themselves would be worthwhile to examine.

In contrast, other religions have done so and are still doing so, including the Catholic tradition, the Protestant traditions, and the Jewish tradition. This is the main reason that certain Muslims have so much difficulty stepping into the secularism that the other religions embrace in France.

This issue must not be set aside due to the emotion of the moment. It is essential not to confuse or stigmatize. But we owe that much to Muslims; we owe it to them to point out this difficulty. And, if possible, to help them confront it. That, more than the State and the elected class, is the help that the other religions, especially Christianity, can contribute.

The fundamental debate which has not set French society ablaze can play itself out in interreligious dialogue. During the attacks on the cartoonists of Charlie Hebdo, by some significant and providential irony, representatives of French imams were meeting with Pope Francis in the Vatican. We cannot say or do better.

To comment, email the Managing Editor, Myriam Renaud, at DivSightings@gmail.com.
To subscribe to Sightings and receive it by email every Monday and Thursday, please click here. 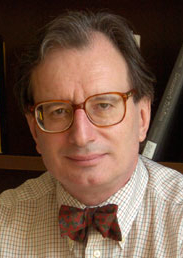 Author, Jean-Luc Marion, is the Andrew Thomas Greeley and Grace McNichols Greeley Professor of Catholic Studies and Professor of the Philosophy of Religions and Theology. Marion studies the history of modern philosophy and contemporary phenomenology. He has written on ontology, rational theology, metaphysics, and is pursuing a long-term inquiry into the question of God, as in The Idol and Distance and God Without Being. He initiated a phenomenology of givenness in Reduction and Givenness. Marion is currently working on a study devoted to deconstructing the myth of Cartesian dualism, Sur la pensée passive de Descartes. He was awarded the Grand Prix de Philosophie de L'Académie Française, elected to the Académie Française in 2008, and received as an immortel (member) in 2010. He will give the Gifford Lectures in coming years.

See All Articles by Jean-Luc Marion