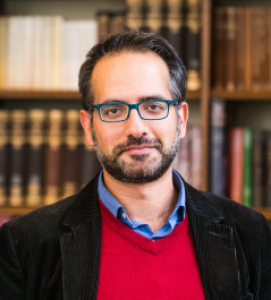 "Impossible occultists: Practice and participation in an Islamic tradition" Anthrosource

Essay: "Varieties of Islamic Social Science" KNOW: A Journal on the Formation of Knowledge

Essay: Empirical Spirits: Islam, Spiritism, and the Virtues of Science in Iran (Comparative Studies in Society and History)

Review: "What is Islam? The Importance of Being Islamic"

Sightings column: How Not to Understand ISIS

Faculty Associate Professor of Islamic Studies and the Anthropology of Religion; also in the College

Alireza Doostdar is broadly interested in religious reason and its entanglements with science and the state. His primary focus is on Shi‘i Islam, which he approaches as a dynamic tradition shaped in dialogue with other religious and secular formations. As a West Asia specialist, he has conducted most of his ethnographic and archival investigations in Iran, but he situates the phenomena he studies in relation to global circulations that take his research far beyond Iran’s national borders. His first book, The Iranian Metaphysicals: Explorations in Science, Islam, and the Uncanny (Princeton University Press, 2018) received the 2018 Albert Hourani Book Award from the Middle East Studies Association (MESA) and the 2020 Vinson Sutlive Book Prize from the Anthropology Department at William & Mary. His next book is a study of the theology of Satan in Iran since the Islamic Revolution.