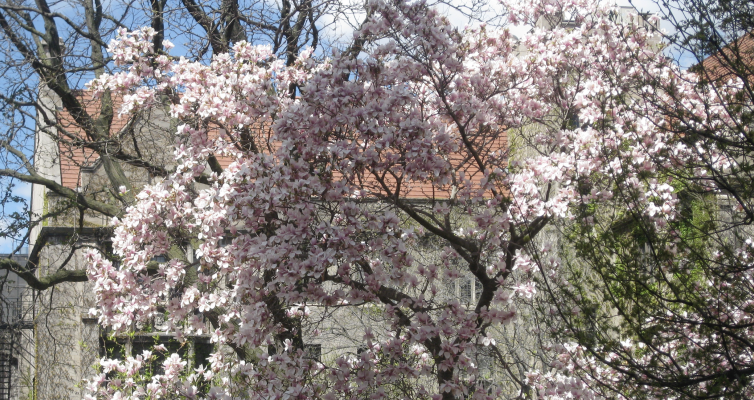 Students working in ethics examine the religious underpinnings of morality across a range of topics in professional and social life, and the manner in which religion orders societies and ecosystems. Courses deal with matters both theoretical and practical and draw on resources that are classical and contemporary in religious thought, moral philosophy, political theory, and the natural and social sciences.

This course will include readings in Jewish and Islamic ethics from al-Andalus and the Maghrib with a focus on the writings of Maimonides (d. 1204) -- especially his "Eight Chapters" and Commentary on Avot (completed in the 1160s) and Ibn al-Mar'a of Malaga (d. 1214) -- especially his commentary on Ibn al-'Arif. Jim Robinson and Yousef Casewit

RETH 30402 - VERACITY: THE ETHICS OF TRUTH AND TRUTHTELLING

You are alone in the world and you are faced with a decision to act. Because you are a human being, there is no “no-action” possible, for the way that the world is constituted, both choosing to act and choosing not to act is in itself a decision about moral action. Philosophers call this being born into the “plight of moral agency.” You are a “moral agent” meaning a rational, choosing, sentient being, with a sense of the past, and a sense that actions and outcomes are connected causally, You are in important ways free, even if you are living within very constrained social and economic circumstances. Among the most critical of the choices you make as a moral agent is to be utterly honest—to yourself and in your speech. Your choice is made in private and within you, and in many cases, no one will know how you came to decide, or what else was possible. For Adam Smith, among others, the source of much of the evil in the world is self-deception. Why is this the case? What a would a life lived as a completely honest person look like? Are lies every justified?
This seminar is about personal morality and ethical choices to lie or to tell the truth, largely the choices of character and being that start with the way one acts when you believe you are alone, choices that are small and large, that shape you and allow you to become a responsible, self-aware and decent human being. We will deal with some basic concepts in the discipline of ethics— the experience of being within a “plight,” the capacity to speak and listen, the reliance on the words of others, the capacity to make promises, and the ideas of moral imagination, reason and empathy that make ethical action possible. We will focus on the issue of veracity, or the act of telling the truth. I will try to argue a case—that one must always tell the truth. We will discuss this claim, what it can and have been rebutted and whether this principle is possible in modernity. Laurie Zoloth

RETH 31101 - HISTORY OF RELIGIOUS AND THEOLOGICAL ETHICS I

This is a history of Western Ethics from the Greeks through the Biblical thought and up to the Middle ages in Christian thought but with comparisons to Jewish and Islamic thought. William Schweiker

RETH 35301 - HISTORY, RELIGION, AND POLITICS IN AUGUSTINE'S CITY OF GOD

Augustine’s City of God is a major work of history, politics, and religion. Written after Rome was sacked by the Visigoths in 410, the work begins an apology (justification) of the Empire’s turn to Christianity and expands to offer a sweeping and deeply theological account of human history and society in terms of earth-bound versus heaven-centered community. Augustine’s citizenship and politics entails living out membership in either fellowship while commingled on earth with the other. Augustine analyzes Roman history and politics as well as the new religion first encouraged and eventually imposed in the wake of Constantine’s conversion. We shall read the entire work in translation, attending to historical observations, political stances, and religious views. Augustine made arguments of his own but saved huge swaths of Varro and other otherwise lost sources to fashion his historical critique of Rome, social analysis, and many ultimately fresh views on matters like human sexuality in paradise and in heaven. The class will meet once a week. A supplementary Latin reading group will also convene once a week for close reading of important and demanding selections in the original. There will be some invited international guest speakers. Course Notes: There will be a weekly Latin reading group (F. afternoon, 90 minutes) for classics and other students who want to tackle Augustine's Latin. Willemien Otten and Michael I. Allen

This is a history of Western Ethics from the Reformation and Renaissance to the 20th Century in Christian thought but with comparisons to Jewish and Islamic thought. William Schweiker

The history of modern Jewish ethics is often taught through the work of seminal thinkers Hermann Cohen,  Franz Rosenzweig, Martin Buber, and Gershom Scholem.  But each of these men were in conversation with women contemporaries who, during the interwar years in Europe, were writing, publishing and organizing. While Hannah Arendt became well known, and while Jessica Peixotto was recognized for her government service, Rosa Rand, and Margaret Susman fell into obscurity.   This course will introduce the student to these thinkers and explore their contribution to Jewish thought and Jewish ethics. Laurie Zoloth

RETH 57900 - BRAUER SEMINAR: THEOLOGY OF NATURE AND NATURE OF THEOLOGY

This Brauer seminar will explore historical, ethical, legal and theological conceptions of “nature” and extrapolating from these reflect on the “nature of theological reflection” and so connect the various meanings of the seminar’s title. The question of nature—human and non-human—is hotly debated today. This is true in the face of the global environmental crisis but no less so in important matters brought before the Supreme Court, which might lead to the overturning of Roe vs. Wade or the undoing of same-sex marriage and are often grounded in appeals to “nature” and the natural. The topic has occupied thinkers throughout Western history ranging from natural law ethics, moral naturalism, definitions of the existence and essence of God and, for Christians, the “nature”, i.e., hypostatic union of the Christ, questions about creation and the natural order, and the possibility and task of natural theology. Even current questions about transhumanism and posthumanism find historical forerunners in ideas about theosis or divinization of human nature as well as in debates about resurrection and the possibility of mystical self-transcendence. Each of these topics implies something about nature and also about the nature and task of theological thinking. The seminar will explore these matters with a focus on and shifting understanding of human and divine nature, sustained throughout by a deep interest in the question of “natural religion,” “natural law,” and “natural theology." PQ: Course admission is based on application. Course Notes: There is a stipend for admitted students. More information about Brauer Seminar classes can be found here: https://divinity.uchicago.edu/martin-marty-center/brauer-seminar. Willemien Otten and William Schweiker

This is a lecture and discussion class that will explore how a variety of philosophic and religious thinkers approach the issues and problems of modern dilemmas in medicine and science in a field called bioethics. We will consider a general argument for your consideration: that the arguments and the practices from faith traditions and from philosophy offer significant contributions that underlie policies and practices in bioethics. We will use a case-based method to study how different traditions describe and defend differences in moral choices in contemporary bioethics. This class is based on the understanding that case narratives serve as another core text for the discipline of bioethics and that complex ethical issues are best considered by a careful examination of the competing theories as work themselves out in specific cases. We will examine both classic cases that have shaped our understanding of the field of bioethics and cases that are newly emerging, including the case of research done at our University. Through these cases, we will ask how religious traditions both collide and cohere over such topics as embryo research, health care reform, terminal illness, issues in epidemics and public health, and our central research question, synthetic biology research. This class will also explore how the discipline of bioethics has emerged to reflect upon such dilemmas, with particular attention to the role that theology and philosophy have played in such reflection. We will look at both how the practice of theologians and philosophers has historically shaped the field of bioethics and at how these claims, methodology, and praxis have continued to shape and inflect bioethics. We will examine the issue of epistemic stance, of truth claims, and of how normative policies are created amid serious controversy. We will explore the nature of the relationship between religion and public policy and study how religious traditions and moral philosophy shape our view of issues as “bioethics controversies” in the first place. Laurie Zoloth

Classic and contemporary theories of society and culture help frame concepts of religion and ethics.  This course will examine social and cultural sources of and challenges to ethics, religion, and the relationship of individuals, culture, and society.  Universal theories of society that do not necessarily take account of race, class, and gender will be considered alongside those self-consciously informed by these issues.  The relationship between human and nonhuman animals will also be considered.  This class will emphasize engaging with and understanding the texts to give students a solid foundation for other classes and comprehensive exams. Course Notes: Undergraduates can enroll via petition. Sarah Fredericks