What Can We Learn From the Charleston Shootings? Hard Choices Yield Great Rewards

In life, we are all faced with the opportunity to serve

In life, we are all faced with the opportunity to serve. It is at times a hard choice to make but those hard choices yield great rewards. Those rewards are mostly for others and not for ourselves. That's what service is all about.

As we mourn the massacre of Pastor and South Carolina State Senator Clementa Pinckney, of the historic Emanuel African Methodist Episcopal Church along with his fellow worshippers, this is a good time to reflect on the role of moral leadership during times of community violence and social crisis.

Moral leaders are women and men who live and lead with integrity and imagination to serve the common good while inviting others to join them. Examples of such moral leadership include Mahatma Gandhi, Martin Luther King, Jr., Malala Yousafzai and Pope Francis.

They are humans who have devoted themselves to the noble call of doing good. They don't have to be saints, although no saint will be rejected. They can be fully fleshed, flawed, and ordinary people who behave in extraordinary ways during times of crisis.

In times of violence and deep and shocking pain, moral leaders initiate acts of healing and reconciliation with justice to repair distressed communities. Such leaders facilitate healing by allowing people to grieve and to grieve in the context of a community of caring neighbors.

Moral leaders listen carefully to grief narratives and create the time and space for people to put pain into words. And, amidst their listening, they find opportunities to help grieving communities to conceptualize action that may become constructive responses to the violence and their anguish.

And, as we learned from South Africa's Truth and Reconciliation Process grief must include and lead to truth telling, and reform of public norms, behavior, law and policy. Another moral leader, Desmond Tutu, often said, "Without forgiveness, there is no future."

While the shooting suspect was sitting in a Charleston, SC black church with a pastor and parishioners before unleashing his calculated and ruthless terror, I was also seated in a black church in San Francisco (Third Baptist Church) co-leading a community forum on violence.

In Charleston, the city lost a moral leader in Pastor Pinckney.

In San Francisco, another moral leader, Pastor Amos Brown, who was an associate of Dr. King, and a prominent civil rights activist, was engaged in leading a community forum on stopping violence and transforming working-class and poor communities.

The forum began by confronting directly the irrationality of black on black violence. Under the guidance of this moral leader, a mother whose son was killed along with three friends spoke of her grief and determination to stop gun violence.

Young former perpetrators, some fresh out of jail, were on hand to apologize and pledge their commitment to rehabilitated living. Community members also talked about the need to stop police violence and incompetence, which are topics of a national conversation now underway.

Here is where moral leadership worked to broaden the conversation.

Pastor Brown placed these examples of violence into a larger frame and guided people to consider institutional and systemic violence such as policies and corporate action that disrespect and destroy longstanding communities by displacing poor families without constructing adequate affordable housing.

The friendships and social capital that were nurtured over decades and generations were now being fragmented leading to another form of grief.

As the Charleston community grieves, it will need to reckon honestly with its history of racism and prejudice. And, it should learn about the Emanuel A.M.E. Church's inspiring history of courageous moral leaders including Pastor Clementa Pinckney.

Moral leaders from every community, every ethnic and economic enclave, should now come forth to serve the common good and ensure a redemptive conclusion to the narrative of this sickening tragedy.

It would be a surprising and refreshing consequence to see Charleston's moral leaders gather citizens from suburban and inner city communities—white and black, Latino and Asian, business, government, civic and interfaith sectors—to commit to long term inclusive community building while mobilizing the resources to make it happen.

In his own words, Pastor Pinckney reminds us that these hard choices can yield great rewards. 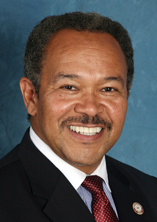 Author, Robert M. Franklin, Jr. (Ph.D., University of Chicago, 1985) is the James T. and Berta R. Laney Professor in Moral Leadership and Senior Advisor for Community and Diversity at Emory University. He is also the Director of the Religion Department at The Chautauqua Institution. In 2010, Franklin was the University of Chicago Divinity School’s Alumnus of the Year. His recent monographs include: Crisis in the Village: Restoring Hope in African American Communities (2007), and Another Day’s Journey: Black Churches Confronting the American Crisis (1997). @MorehouseMystiq