A Voice on Trial 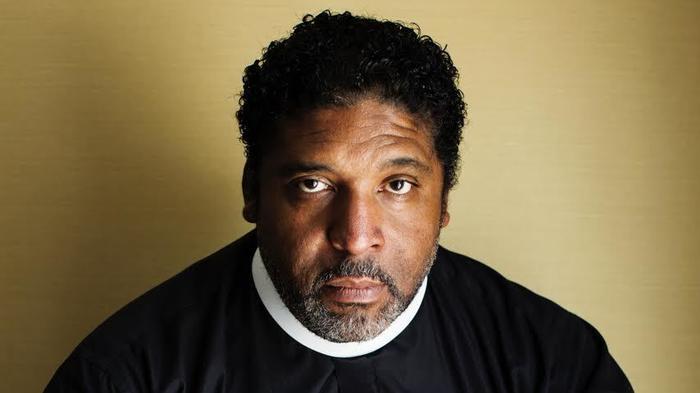 Two weeks ago, Rev. William J. Barber II was convicted on charges of trespassing in the North Carolina State Legislative Building. While many legal questions regarding the freedom of speech, the right to assemble, and the possibility of trespassing on public property are raised by this trial, I was most arrested by the prosecutor’s preoccupation with the sound of Rev. Barber’s voice. Earlier on the day of his conviction, when Barber took to the stand in his own defense, he found himself embroiled in a debate about the black prophetic preaching tradition that he so powerfully embodies. During the cross-examination, the prosecutor used videos of the event to characterize the activist’s voice as “quite loud,” as “yelling,” as a sonic surplus that drowned out the commands of the officers who came to silence him. Barber responded that the register of speech to which the prosecutor referred was his “preaching voice,” an instrument which, like the clerical vestments in which he was arrested, symbolizes submission to a higher authority.

I find the interrogation of Barber’s preaching voice as revelatory as it is gratuitous. To put it bluntly, it was Barber’s voice that was on trial—what he said and how he said it. It was loud, but so is injustice. It was insistent, but so is oppression. In Barber’s tradition, there is meaning in what sounds unruly: an abundant zeal whose source is divine. More than the volume, cadence, or pitch of his utterances, it was their content that precipitated both the arrest and the line of questioning. This despite the prosecution’s argument that Barber’s beliefs should not factor into this trial. Are we to believe that the leaders of the legislature called the police with no thought to the fact that he was protesting their actions? Hardly. Facts without context, sound without content risks making justice a little too blind. This line of inquiry clarified the indictment’s unstated focus on a voice that has circulated rather widely in recent years. The disruptive features of Barber’s voice, then, functioned as a representative window into a life of prophetic ministry.

This was Barber’s preaching voice, but it was not his alone. Is effective preaching ever a solitary act? No, this disruptive-yet-righteous sound emerged from a collective, from the crowd’s antiphonal juxtaposition of phrases from the state constitution and Christian scripture against statistics which quantified the dastardly impact of the legislature’s refusal to expand health care for the poor. To portray this scene of call-and-response as one man’s yelling requires both an indiscriminate reduction of a thick sonic event and a discounting of the elevated patterns of speech that are a multi-religious commonplace.

The result was a caricature that recalls a great many misrepresentations of black religious expression. To accent Barber’s volume while ignoring the content of Barber’s message rearticulates a fundamental misunderstanding of the tradition of prophetic black preaching, a homiletic genealogy forged under the conditions of chattel slavery, fed through Reconstruction, that fought through Jim Crow, and flows through this current moment—the age of the New Jim Crow. Such preaching has always had a complicated relationship with the law, without which Rev. Dr. Martin Luther King Jr. would never have written a letter from that jail in Birmingham. In many spaces and at many times, black preaching was illegal—this fact testifies that not every law is just, nor is every law good. In fact, this very argument was the point of Barber’s protest: the legislature’s rejection of Medicaid expansion hastened the death of many who might have lived longer and better lives had the law granted them access to health care. In both form and content, Barber’s protest gave vent to a preaching tradition, which, at its best, represents an interruption of the status quo, an injunction against legislative immorality that puts the holders of political, economic, and priestly power on notice that theirs is not the only power, that the present order is not the only possible one.

Rev. Barber has long been a voice for the disinherited, a voice crying in the wilderness, just as the wilderness cries for a voice. Such sounds of righteous indignation have been involved in remaking the world before, resonances like Dr. King’s sacred rhetoric, which Richard Lischer calls “a word that moved America.” In this time of trial, America desperately needs to be moved again. If that is to happen, a voice like Barber’s must not be silenced.