I think we must believe it is possible...&nbsp; - James Baldwin, The Fire Next Time For many scholars and commentators, religion represents a unique challenge to democratic politics

I think we must believe it is possible...

- James Baldwin, The Fire Next Time

For many scholars and commentators, religion represents a unique challenge to democratic politics. But the challenge does not reside so much in a fundamental incompatibility between the two, but rather in how and in what ways do we make sense of the complex roles religion plays in public life.

The challenge is made all the more difficult during times of deep political tension which renders disagreements of political process, program or principle as foundational and absolute conflicts of ultimate concern. It is in these moments of broad and deep dissensus when we are bereft of a shared language to express our membership in a common political community let alone a collective sense of solidarity.

A significant challenge for any democratic polity is the manner in which religion diminishes our collective capacity to communicate in politically meaningfully ways. It is not only the incommensurability between differing faith claims that evades political adjudication that is the problem, it is also the manner in which political issues and problems are framed in religiously significant ways.

Political language imbued with the spirit of religion in this manner blurs the boundaries between religion and politics to such an extent that the political becomes synonymous with and an extension of the religious, even for those without an explicit religious claim or commitment. Political positions are ultimate positions that frame the meaning and ultimate significance of life itself.

“Ours is the age of the intellectual organization of political hatreds” are the words the French essayist, Julien Benda, used to describe the opening decades of the twentieth century in his 1927, hard-hitting polemic, La Trahison des Clercs (The Treason of the Intellectuals). Perhaps the framing Benda offers can be instructive in the opening decades of the twenty-first century, namely “ours is the age of the theological organization of political hatreds.”

In our highly polarized times, we are not dealing with “religion and public life,” but rather we are experiencing a moment in which our political concerns are framed within a theological architecture that provides them meaning along a vertical axis such that politics are the means toward more fundamental theological ends.

Thus, to think religion and politics now requires a fundamental revision of the categories and constructs which scholars and commentators use so that we may gain the requisite critical capacity to understand the depth of this transformation in our time. The shift to the category of theology seeks to register the foundational character of the deep imbrication of religious logics and ideas with the languages and practices of politics and the political.

The theopolitical drama that is North Carolina politics stands as an exemplary instance of a deeper problematic that is our contemporary experience of religion colliding with democracy. In 2012, North Carolina elected a Republican governor and Republican legislators in great enough numbers to take control of both state houses and the executive branch for the first time since Reconstruction. Progressives and republicans, many of whom are inspired by their religious traditions, have been engaged in an ever escalating political contest over the fundamental role and function of government.

By the spring of 2013 the nation witnessed the emergence of “Moral Mondays.” Citizens from all walks of life have gathered on Mondays in front of the legislature and at venues across the state to protest against legislation—such as cuts to public education and changes to environmental protections—that have been passed or are being considered.

The actions and debates by those allied with North Carolina’s “Moral Mondays” and those on the right of the political spectrum reminds us that politics—while animated by political policies, programs, and principles—cast in religiously significant languages exceeds politics proper. It becomes a theological imperative for citizens to align the political with the ultimate ends of life itself.

In a deeply stratified and segregated society, political polarization is not just a function of partisanship. Rather, when the world of politics is understood as absolutely discontinuous with the meaning of life and existence, a properly political response must be theological.

And it is to the theological that we must critically attend if we are to understand the continuing evolution of America’s unique experience with democracy. The challenge thus becomes one of understanding the subtleties and complexities of public conversations framed in ultimate terms, which pursue ultimate guarantees purchased through the institutions of the political.

Thus we must begin again to think of the relation of religion and democracy not as mutually exclusive or antagonistic, but rather as the very condition of the possibility for understanding how the reconstitution of democracy and all that it entails must forge a new language of politics that facilitates the creation of fresh bonds of political community and civic solidarity.

If we do not forge a robust thinking which opens up new possibilities to coexist with visions of transcendence critically attentive to our disparate hopes and histories, the future of our democracy may find its best expression in the words of the African American spiritual, “God gave Noah the rainbow sign, No more water, the fire next time!”

McClain, Dani. “How the Moral Mondays ‘Fusion Coalition’ Is Taking North Carolina Back.” The Nation, July 1, 2014. 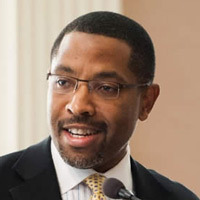 Author, Corey D. B. Walker, is Dean of the College and John W. and Anna Hodgin Hanes Professor of the Humanities at Winston-Salem State University. He has published widely in the area of African American and American social, political and religious thought and public life and has recently completed a new book project entitled Between Transcendence and History: An Essay on Religion and the Future of Democracy in America.

See All Articles by Corey D. B. Walker