The war came, again, in August, this time in the guise of what The New Yorker’s Jelani Cobb dubbed “The Battle of Charlottesville.” Hillary Clinton’s “deplorables” hopped their basket and marched on the Lawn of the University of Virginia on the evening of August 11, 2017, and then on Emancipation Park in Charlottesville the following day for the planned and permitted—but ultimately cancelled and reformatted—“Unite the Right” rally. The action—ostensibly responding to the City of Charlottesville’s plan to remove a monument featuring Robert E 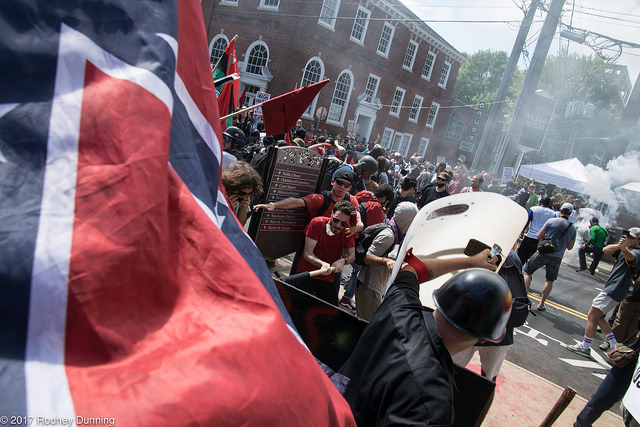 The war came, again, in August, this time in the guise of what The New Yorker’s Jelani Cobb dubbed “The Battle of Charlottesville.” Hillary Clinton’s “deplorables” hopped their basket and marched on the Lawn of the University of Virginia on the evening of August 11, 2017, and then on Emancipation Park in Charlottesville the following day for the planned and permitted—but ultimately cancelled and reformatted—“Unite the Right” rally.

The action—ostensibly responding to the City of Charlottesville’s plan to remove a monument featuring Robert E. Lee from the park that formerly bore his name—was a provocation, a parade of anti-Semitism, ethno-nationalism, racism, homophobia, and fascism in language, armaments, and symbols. Multimodal confrontations between the rally-goers, diverse counter-protesters, and the police resulted in significant numbers of injuries, arrests, and deaths, including the vehicular attack that martyred counter-protester Heather Heyer.

As the events and coverage unfolded on August 12th, the hashtag #ThisIsNotUS began trending on Twitter, beginning with a series of tweets by pop artist Lady Gaga. She tweeted, first:

@ladygaga: I pray a true leader will rise to expel hatred from America. This is not US! This is Anti-American #ThisIsNotUS #Charlottesville #BeKind

@ladygaga: I know we are not created to hate each other, but to help & love. Use hasthtag #BeKind #ThisIsNotUS to tweet positive messages. #Charlotte [sic]

Immediately, profusely, and vehemently, Gaga’s followers and others responded—some sharing the type of “positive messages” for which Gaga had called, others coopting the hashtag to lament what they took to be the suppression of white supremacists’ right to freedom of expression and the tyranny of PC culture. Many impugned and historicized the notion that the “Unite the Right” rally and its organizers were somehow out of keeping with American values as lived. Discussing the powers and limits of the hashtag as a political project a week later, Christiana Mbakwe wrote, “The most optimistic reading [of #ThisIsNotUS] is that many believe violent racism isn’t and shouldn’t be the American way. A more somber reading might suggest that many Americans are either grossly misinformed or in denial about America’s racial history.”

The effort to correlate the events at Charlottesville with fundamental questions of national life in the space of twelve characters touched a nerve. It raised—to quote from Robert Bellah’s 1967 essay “Civil Religion in America”—some of “the deepest questions of national meaning,” and it sought to answer them with a minute instance of public theology which, as Mbakwe observed, could be read as naïveté, as denialism, or as righteous prophecy.

In support of reading the hashtag as prophetic witness, one might argue that Gaga’s formulation #ThisIsNotUS is perhaps the most succinct American jeremiad one could hope to construct—where “This” signifies the mélange of white supremacy and ethno-nationalism animating and manifesting in “Unite the Right,” and where “US” is all at once a first-person plural pronoun, an abbreviation for “United States,” and a metonym for the pristinated account of American history and ideals that Bellah calls civil religion, and against which public observers (or theologians) are meant to judge the perturbations of the moment. In this charitable construal of #ThisIsNotUS, “This” must not stand, is un-American, and shall be redressed.

In support of reading the hashtag as denialism, one might confront the ways in which the claim that “This” is not “US” replicates the elisions of the civil religion thesis’s effort to codify and prescribe a non-idolatrous version of American nationalism. Among other things, “The Battle of Charlottesville” represents—as Cobb’s epithet and, allusively, my own title imply—yet another skirmish in the protracted struggle over the memory and interpretation of the American Civil War. We should remember that Bellah’s account of the Civil War in “Civil Religion in America” isolates and canonizes Abraham Lincoln’s diffidence and martyrdom but neglects the manifold ways in which (at least) the next century of American life countermanded Lincoln’s insistence that the nation move forward “with firmness in the right as God gives us to see the right.” If, as Ernst Renan theorized in 1882, having a nation or nationality requires one to forget one’s history (or to get one’s history wrong) then the insistent remembering on the part of #ThisIsNotUS’s detractors is anathema to the cleanly galvanizing aspirations both of the hashtag and of the civil religion thesis itself. Efforts to sift through and to move forward from Charlottesville ought, then, to proceed on other terms.

It might be tempting, in support of reading the hashtag as naïveté, to dismiss #ThisIsNotUS as a rhetorical miscalculation made under pressure, or to make allowances for it as a well-meaning protection spell cast against the trials and cruelties of the political moment. To do so, however, would be to slight the solicitousness of its logic, which is pervasive in the public commentary on Charlottesville. As one example, Spencer Dew’s Religion Dispatches piece “Public Shrines to Treason: Charlottesville and the Cult of Confederate Memorialization” (see Resources below)—which is a cathartic read and a furious excoriation of the cult of the Lost Cause—concludes that “after Charlottesville… no American can pretend Confederate memorials don’t serve as public shrines to a treasonous worldview… that has [been] and always will be at odds with the country against which the Confederacy rebelled” (emphasis mine). As an argument about the formal articulations of political philosophy and civil religion, this may be true, but it elides also the fact that the predominating mode of Civil War memory in the century following Appomattox (during which time monuments and other erections and christenings honoring the Confederate generals proliferated) prioritized the reconciliation of North and South at any cost.

We glimpse the reconciliationist imperative in Frederick Douglass’s 1871 Decoration/Memorial Day address at Arlington National Cemetery. Douglass notes that “we are sometimes asked, in the name of patriotism, to forget the merits of this fearful struggle, and to remember with equal admiration those who struck at the nation’s life and those who struck to save it, those who fought for slavery and those who fought for liberty and justice.” While Douglass spectacularly refused this imperative, the vast majority of his white countrymen complied with it. The editorial preface for Century Magazine’s hugely influential and popular series on the “Battles and Leaders of the Civil War,” for instance, stipulated its purpose as

to soften controversy with that better understanding of each other, which comes to comrades in arms when personal feeling has dissipated, and time has proven how difficult are the duties and how changeable the events of war—how enveloped in accident and mystery… And the generation which has grown up since the war, to whom these papers will be opportune instruction, may now be taught how the men who were divided on a question of principle and State fealty, and who fought the war which must remain the pivotal period of our history, won by equal devotion and valor that respect for each other which is the strongest bond of a reunited people.

All of this, of course, is not to say that we should refrain from condemning the alt-right, thinking carefully about how to exorcise the statuesque ghosts of the Confederacy, or articulating and defending principles of civic order and virtue. It is to say, rather, that we should take care that the constitution of the “US” against which we define any particular “ThisIsNot” does not absolve “US” of the interrogative reckoning that must still occur: In what ways might we be complicit in even that which we must abjure? In what venues of public (and private) life are white supremacy and bigotry present, even if less spectacularly or overtly so? Is this, and in what ways is this, US?

Photo Credit: Rodney Dunning/Flickr (cc)
SIGHTINGS is edited by Brett Colasacco (AB’07, MDiv’10), a PhD candidate in Religion, Literature, and Visual Culture at the University of Chicago Divinity School. Sign up here to receive SIGHTINGS via email. You can also follow us on Facebook and Twitter.

See All Articles by John Howell