What happens when we compare Colin Kaepernick to Tim Tebow? Here we have two professional football players “taking a knee” not for a coach’s huddle but to express personal convictions outside the boundaries of their sport. I understand how much these cases differ, but they share more than a common physical gesture 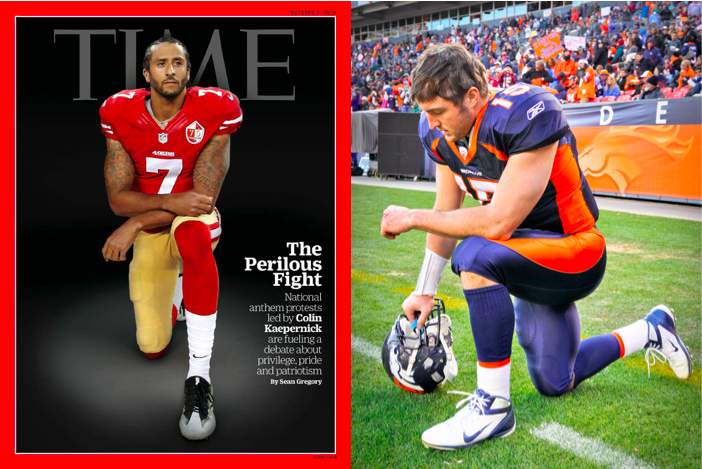 What happens when we compare Colin Kaepernick to Tim Tebow? Here we have two professional football players “taking a knee” not for a coach’s huddle but to express personal convictions outside the boundaries of their sport.

I understand how much these cases differ, but they share more than a common physical gesture. Tebow’s devout pose and Kaepernick’s anthem protest both test the boundaries of football as civil religion. As John Stackhouse points out in a previous Sightings essay, “Americans don’t want to mix politics with [civil] religion,” even though performing the national anthem at football games already does so. But the act of taking a knee in dissent suggests a different, critical form of civil religion.

When Robert Bellah framed the influential concept of civil religion in 1967 to talk about an “apprehension of universal and transcendent religious reality” in American experience, he wanted to identify the sacred beyond institutional religion, a set of practices and beliefs that reinforce shared values in a pluralistic American society. But civil religion, like other religions, can also serve to divide “us” from “them” by defining who is a good American. Bellah himself would pull away from the term civil religion, criticizing those who used the term to divide, for what he called “the idolatrous worship of the state.”

The charge of idolatry is theological, and it follows a line we can trace at least as far back as Lincoln's second inaugural address of 1865, which points out that “Both [sides in the war] read the same Bible and pray to the same God, and each invokes His aid against the other.” Lincoln believes justice is on his side, but he warns against making a righteous war into a holy war. Given how easily civil religion can lapse into idolatry and violence, it is easy to agree with Ebrahim Moosa, who argues that civil religion is not just a “benign form of social cement” but also too often a justification for drawing boundaries between “us” and “them.”

Yet religion has long included dissent. In England and the American colonies, dissenters were religious groups outside the official state church. One of these groups, the Quakers, held strong convictions against swearing oaths. Respect for these convictions led the authors of the U.S. Constitution to permit a solemn declaration instead of swearing an oath. Like Bellah, the Quakers and others resisted unthinking reverence for the symbols of government. If standing with your hand on your heart is a ritual of civil religion, then Kaepernick’s kneeling belongs to this history of conscientious dissent.

Dissent involves thinking as well as acting, and it usually involves pain. In an essay called “Theory as Liberatory Practice,” bell hooks says, “I came to theory because I was hurting—the pain within me was so intense that I could not go on living.” Theory is a way of seeing differently, a challenge to the status quo that seeks liberation through dissent. Yet dissent can offend and infuriate defenders of the status quo. When Tommie Smith and John Carlos raised their hands at the 1968 Olympics, and when, more recently, the players of the NBA and WNBA wore shirts calling attention to police violence against people of color, the passions they aroused revealed how deeply people feel not only about the national anthem but also about professional sports as a kind of civil religion. This kind of dissent enables the transformation of idolatrous civil religion into critical civil religion.

Great traditions contain diverse faces, voices, and perspectives. Great traditions are open-ended, asking old questions again and again. That, I suggest, is the hope and promise of critical civil religion in America. An example of this open-endedness comes from the heart of the controversy: the “Star-Spangled Banner.” There are actually four verses or stanzas to this song, but only the first is performed at sporting events. As it turns out, the third verse denounces a group of African Americans, runaway slaves who had joined the British military after gaining their freedom. This embarrassing fact would come as a surprise to many Americans, but there is a more obvious fact about the national anthem that deserves consideration: it ends with a question. Civil religion, like religion in general, can be dogmatic, dictating exactly what we should think and feel; but it can also be open-ended, inclusive, and critical in the way that Lincoln’s Second Inaugural and hooks’s reflections on theory are critical. The last two lines of the national anthem are a question that could very well address controversies around race, sports, violence, and dissent:

O say does that star-spangled banner yet wave
O’er the land of the free and the home of the brave?

Does it? Imagine a stadium full of fans not cheering loudly but turning to their neighbors to discuss the question, or simply observing a moment of silent reflection, which is what Kaepernick and so many others appear to be doing.

- hooks, bell. Teaching to Transgress: Education as the Practice of Freedom. Routledge, 1994. 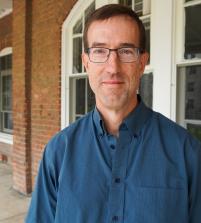 Author, Brian Britt (PhD’92), is a professor of religion and cultural theory in the Department of Religion and Culture at Virginia Tech. His most recent book is Postsecular Benjamin: Agency and Tradition (Northwestern University Press, 2016), and his current project is Religion Around Walter Benjamin (in process).

See All Articles by Brian Britt