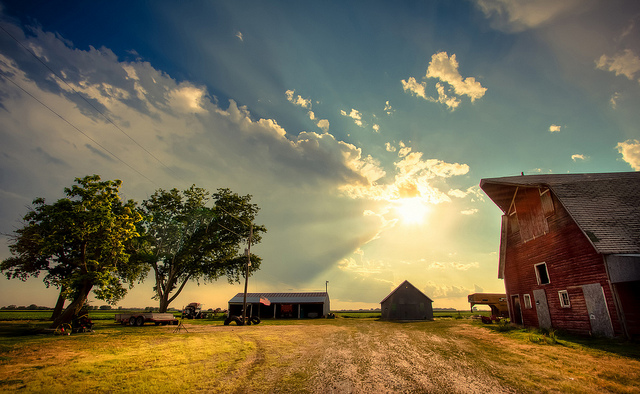 “The Ruin of Farm Country,” a headline in Thursday’s New York Times, would ordinarily draw little notice. Only two percent of American citizens farm, and they may seem as remote as Afghanistan to urbanites today. Add in another five or ten percent for small town residents, many of whom prosper or fail in the light of farm destinies: these non-urban folk are sighted infrequently. I picture that the powers-that-be at our host, the Marty Center, could prove statistically that we overlook our country cousins most of the time.

Robert Leonard, author of the “Ruin” column, is the news director at two Iowa radio stations, and is well credentialed to observe and editorialize. “Rural America is about to undergo a major demographic change … [It] is going to be hollowed out very quickly,” as farms consolidate and towns dependent on them “will certainly die.” Thus “Iowa’s farmers are aging, and younger farmers aren’t replacing them proportionally.” Institutions are affected, beginning with community banks. As for rural hospitals and clinics, major employers? One day “they, too, will be gone.” The big agribusinesses are hovering and will swoop in. “The destruction of a way of life cuts … deep,” especially when government is unheeding, misguided, or misguiding.

Not all government is impersonal and remote. Some experts see potential in small towns. New Geography writer Wendell Cox two years ago saw life in the often-scorned multiplicity of small governments in small urban areas. “America needs both its small towns and its bigger cities,” he wrote, arguing that “much of what we call a ‘metropolis’ functions more effectively as a network of small towns.”

Spoiler alert: I am going to break protocol and do some amateur reporting, but will base it on sustained observation. Aware of the randomness of such an operation, I engage in it because I see regular evidence of humanizing and socially effective work among institutions in “small places,” as documentation about them lures me. Speaking of randomness, I’ll write about just one of the many thousand instances which reach people like me through personal experience, reading of fiction, social-scientific studies, and the like. Let me plunge into this random sample: West Point, Nebraska—my birthplace.

I have spent few days there since my twelfth year in 1939 (yes, nineteen thirty-nine!) but, thanks to the generosity of and correspondence with past publishers of the regularly prize-winning West Point News, I receive the paper weekly, and read it, also weekly. The population is 3,660, which is barely more than twice the population of the skyscraper in which I now live. Religion news? As in most such towns, its fronts are many. I count forty-five churches in its weekly directory. Homogeneous? Yes. It’s still “white,” with only shadings beyond it, thanks to the Church of Dios Es Amor and a Spanish mass at St. Mary’s Catholic Church. A Winnebago reservation is a few miles away, but I find little evidence of interactions with non-Indians, just as there was none when I was young. These Nebraska towns have their limits, like all other towns, but we can still learn from them.

“Larger world” institutions are very much a part of life in towns like these. Page one introduces a West Point native as she begins to head the Rural Futures Institute at the University of Nebraska, with her focus on “leadership, technology and rural-urban collaboration.” No hiding from reality there! The university stimulates and hosts in small towns “community conversations” on urgent political and economic themes. I pay attention to topics of lectures and symposia which connect rural and small town life to big government and media concerns. I wonder whether many of my neighbors in the metropolis are as engaged as are many of these semi-rural, church-going, “for all their faults” citizens. I wish that more leaders in the media paid more attention to them. I’d give more time to writing this, but the West Point News has just arrived, and I’ve got to get up to date before I open the New York Times and the Wall Street Journal.