Popular music and media have long found themselves at the center of culture-war polemics in the United States, as the last year’s frequent pearl-clutching responses to Cardi B’s “WAP” (feat. Megan Thee Stallion) and Lil Nas X’s “Montero (Call Me By Your Name)” make clear. Despite ongoing assertions that pop music advances a secularism hostile to values espoused by some Christians, popular music has for decades mined religious iconography to analyze all sorts of facets of everyday life in ways that flatly contradict this purported binary. Consider, for example, the irreverent double-speak of Madonna’s “Like a Prayer” or the religiously laden eroticism of Depeche Mode’s “Personal Jesus,” both from  1989.

Goth and darkwave music center religious (and especially Christian) imagery in their art: Bauhaus evokes older Catholic imagery to create an otherworldly aesthetic (e.g., tracks such as “A God in an Alcove,” “St. Vitus Dance,” and “Stigmata Martyr” on In the Flat Field [1980]), Depeche Mode redeploys Christian tropes to erotic ends (e.g., “I Feel You” [1993] or the aforementioned “Personal Jesus”), and Siouxsie and the Banshees incorporate traditional Christian images to heighten the spectacle of their sprawling, Orientalizing sound (most notably in their final album The Rapture [1995]). This musical lineage may give us a different vantage point on appearances of religion in contemporary music, alerting us to what is lost when a segment of culture warriors is allowed to define religion and secularity in the media.

The first track, “Prayer from Nowhere,” opens with darkwave staples: a growling synth line and pared down drum machine. As Eisold’s vocals enter, he casts himself as a pilgrim “on the side of the road” unable to find or reach his addressee. The lyrics accumulate verbal ironies: “Wore a halo in hell,” “Blasphemy, sanctity/ All converge in me.” As he intones, “Love, don’t take me down,” backing vocals enter and interrupt his isolation with the chorus. While the religious imagery is unmoored and “from nowhere,” the song takes the resolute form of prayer seeking love as deliverance for the singer’s vagabondage.

The subsequent six “lessons” continue to treat the album’s themes from a variety of angles and in different registers. Standout track “Nightlight” takes the ups and downs of a romantic relationship and casts them as a devotional labor to enter heavenly “gates of gold;” eschatological time, already and not yet, is turned as a lens to illumine the phenomenology of relationships’ twinned orientation to the present and the future both. “Psalm 23,” replete with harp-like strings added over the pulsing bass synth, draws on biblical imagery to describe the intensity and little death of erotic life: “I’ll be a shadow in the valley of death.”

The middle track, “Love is All,” opens up from the growling sleaze of the earlier synth tones, including soaring lead tones, a harmonica, and vocal contributions from Eisold and Lee’s child. Taking the conceit of tending a garden as an image of caring for a relationship, the song opens by listing the necessities for growing flowers: “sun/ water/ love.” The flowers’ growth upward, at once mundane and miraculous in Eisold’s telling, bespeaks a resolute optimism in the ability for love to coax life out of apparent death: “Like Christ, we rise.”

The remaining tracks form a chiasmus with the opening three, though inflected differently after the resolute optimism of the central song. “Happy Birthday Dark Star” juxtaposes dramatic, gothic imagery with almost-trite clichés of a love song, refusing to give up either as the song fades out amid increasingly layered, airy synth arrangements. “Honey Flower” underscores the delicateness of love—like a flower—both in the day to day and on a cosmic scale: “Tell me how does it feel/ When the day is done/ Tell me how does it feel/ When it all disappears.”

The closing track, “Promised Land,” is a dance anthem replete with synthesized choral vocals, gated drum beats, and bass and synth lines that sound borrowed from an early Sisters of Mercy track. This frenetic energy is tempered by the specter of death –“In life we love/ In death we dance”—serving at once as a memento mori and as a celebration of having a traveling companion on the long road of life (and death)—”Take my hand/ To the promised land.”

Many Christian writers have suggested that humans’ romantic love gives some insight into divine, higher love. Cold Cave’s album, for its part, asserts that meaning may move in the opposite direction as well, from religious discourse to everyday human interaction. It is not just Simon Peter addressing the risen Christ who says, “I love you.” Over the course of Fate in Seven Lessons, then, both the contingency of human life and the fleetingness and ubiquity of love come to be fittingly described not with the acculturated gravitas of religious imagery alone, but also by the mundane exchanges of human relationship: “Good night/ I love you/ Talk to you tomorrow.” 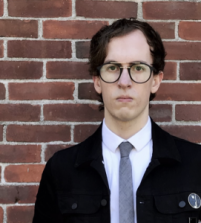 Author, Matthew Vanderpoel (PhD '20), is a scholar of medieval and early-modern Christianity. An intellectual and literary historian, Vanderpoel studies Christian theology, philosophy, and poetics, with a particular interest in fourteenth-century debates surrounding sensation, cognition, and epistemology.

See All Articles by Matthew Vanderpoel