Progressives, Evangelicals, and Presidential Politics: What Love Has, and Hasn’t, Got to Do with It

A recent analysis of the dynamics of the 2016 presidential election in Sightings—Myriam Renaud, “Progressives: To Take Back the White House, Love Your White Evangelical Neighbors”—is useful 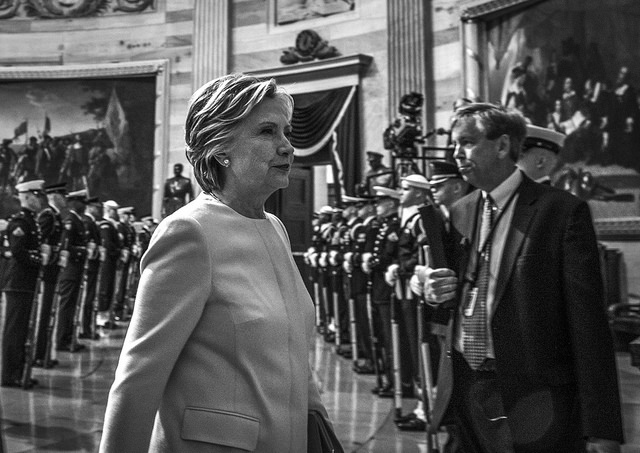 A recent analysis of the dynamics of the 2016 presidential election in Sightings—Myriam Renaud, “Progressives: To Take Back the White House, Love Your White Evangelical Neighbors”—is useful. As Ms. Renaud says, the Clinton campaign failed to replicate the Obama campaigns’ efforts in rural communities, and that fact is at this point one of the few matters of bipartisan agreement in our civic life. The shared presumption seems to be that, had such an effort been pursued, Secretary Clinton would have garnered the 70,000 votes it turned out that she needed to secure not only the popular vote but the Electoral College, and thus to take the oath of office and become the nation’s forty-fifth (and first woman) president on January 20, 2017. Many of Secretary Clinton’s fellow Democrats have articulated this analysis, and their consequent frustration, as a forceful indictment of her campaign.

Still, Ms. Renaud cites data that flesh out this claim in ways that might give pause to Secretary Clinton’s critics. Barack Obama’s more skillful courtship of evangelicals, she reports, availed his campaigns of approximately one in four white evangelical voters in 2008—and slightly less in his reelection campaign in 2012. But political scientists who study American electoral behavior teach us that major shifts in such designated voter blocs are uncommon. If progressives were to improve their efforts in 2020, it is possible but difficult to envision a scenario in which such exemplary cultivation would translate into more than one in four who might vote differently than they did in 2016.

Ms. Renaud also underscores an abiding tension between “progressives” and “evangelicals,” arguing that there is a common line of condescension and contempt toward their counterparts on the part of progressives. Such incivility extends from Secretary Clinton to (most recently, as invoked in her article) the editors of The Nation, and will only serve to alienate an evangelical voting bloc that might have created a different result in that election, and could in future presidential elections as well.

Arrogance and presumption are clear and present dangers in political life and electoral politics. I am less sure that these faults are in our current moment chiefly the provenance of progressives. Whatever may in fact be the case, Ms. Renaud’s essay seems to me to proceed from a consensus about electoral demographics that risks obscuring a set of related considerations regarding how Americans should think about the current and future intersection of religion and politics in our democracy.

The constitutional right to exercise the franchise does not ensure that the franchise has been rightly exercised. That evangelicals had the right to support Donald Trump’s candidacy does not mean that they were correct to do so. “One man [sic], one vote” does not equal “one right vote” but “the exercise of one’s right to vote.” Those persuaded that the election of Donald Trump rather than Hillary Clinton was a disastrous mistake on the part of the electorate have available a range of reflections. Insofar as the focal point of those reflections to date seems to be the failure of Secretary Clinton regarding the hopes of the Democratic Party, it may be appropriate to give due consideration to the failure of white evangelicals with regard to the hopes of their nation.

Ms. Renaud notes that such evangelicals seem largely pleased in retrospect about their support of a president whose brief span in office has in seven short (or long) months manifested the accuracy of the critiques levied against him during the campaign by many, including his opponent: that his vaunted deal-making is conducted outside the law; that he is ignorant of the foundational tenets of our democracy; and that in lieu of substantive consideration of issues he is prone to rhetorical flourish (“Lock her up!” “Sad!”), 180-degree reversals in policy, and an inveterate proclivity to incivility both nationally and internationally.

The premise of the lively experiment that is our democracy is the wager that when the good for all the people is consulted, democracy is served. When an election is conducted, this entails two considerations. One is exercise of the franchise by the greatest possible number of eligible voters. In truth, voter participation in the past three national elections has, to our nation’s shame, been actively circumscribed. The other is that a citizen’s exercise of the franchise indexes not self-interest but a perception of the common good.

These considerations prompt two caveats. Each is crucial. To the degree that Ms. Renaud’s analysis tends to conflate the rural vote with what is predicated as the white evangelical perspective, that is probably at least partly mistaken. And I am not sure that the solution to an appropriate intersection of religion and politics is best addressed by recourse to love of neighbor. Those who would practice love of neighbor should probably do their level best to love their neighbors irrespective of how they exercise their franchise. As Martin Luther King demonstrated, however, love of neighbor requires nothing less than a clear-eyed assessment of the neighbor. Such an assessment in turn implies that more than love—arguments and evidence about the common good for our nation—will be prerequisite at least to begin to adjudicate, much less resolve to one or another political end, the differences between progressives and evangelicals.

- Gamwell, Franklin I. Religion among We the People: Conversations on Democracy and the Divine Good. State University of New York Press, 2015.

Image: Hillary R. Clinton heads toward the inaugural luncheon during the 58th Presidential Inauguration in Washington, D.C., on January 20, 2017 | Photo Credit: Airman Magazine/Flickr (cc)
SIGHTINGS is edited by Brett Colasacco (AB’07, MDiv’10), a PhD candidate in Religion, Literature, and Visual Culture at the University of Chicago Divinity School. Sign up here to receive SIGHTINGS via email. You can also follow us on Facebook and Twitter.