A Packet for Rachel Fulton Brown

Editor’s Introduction Shortly after assuming responsibility as editor of Sightings, I received some notes from W 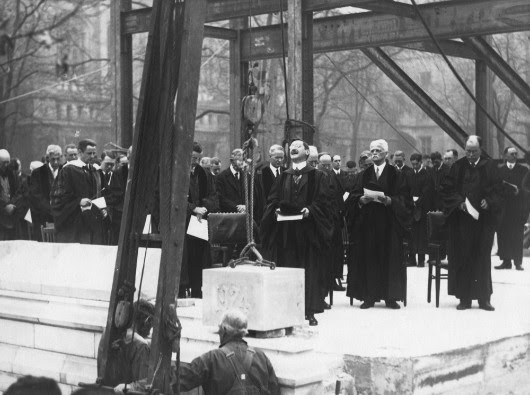 Shortly after assuming responsibility as editor of Sightings, I received some notes from W. Clark Gilpin, a former director of the Martin Marty Center, concerning the origins and purpose of this publication. Sightings, I learned, grew out of the Public Religion Project, which was directed by Martin E. Marty from 1995 to 1998, and whose stated mission was “to promote efforts to bring to light and interpret the forces of faith within a pluralistic society.” Marty observed: “Bringing to light implies that there has been darkness, or at least shadows. We have not joined those who complain about a total absence of religion in a society gone secular; we believe that they misrepresent American public life… In many ways, in a society where religion is not an official establishment, it is ‘everywhere and nowhere.’ For those reasons, among others, it is often apparently shadowed and in need of being ‘brought to light.’”

One of the founding principles both of the Public Religion Project and of Sightings was that we should endeavor to be “disinterested,” because, Marty wrote, “whatever our own convictions, if we are perceived as favoring ideologies of right or left (or center!), the interpretations cannot be of much use to the public and to leaders. Our task is to help interpret interpreters after they have been ‘brought to light.’” As your editor I have strived to live up to the spirit of that early and abiding commitment, even though—as Gilpin has observed—the “highly polemical circumstance of religion in contemporary societies” has rendered that initiating “disinterestedness principle” increasingly difficult and problematic. But if it is impossible, in the current climate, to expect that all of our authors will themselves be disinterested, then it is all the more crucial that we give space to a variety of viewpoints—even views some readers are likely to find deeply offensive.

When I heard that there was a professor here at the University of Chicago—an affiliated faculty member of our Divinity School—who not only supported Milo Yiannopoulos but also understood her support of him as concomitant with her work as a medieval historian and scholar of religion, I immediately saw an opportunity for Sightings to bring something to light. So, following the Berkeley incident, I invited Rachel Fulton Brown to argue for the significance of Yiannopoulos’s activities, specifically in relation to the academic study of religion, in a form appropriate for our larger aims and readership. What she submitted became “Why Milo Scares Students, and Faculty Even More,” which we published on Thursday, February 16th. That same day Yiannopoulos shared the piece on his Facebook page; the following day, Breitbart—then Yiannopoulos’s employer, though not for long—shared it as well.

I knew that my decision to solicit and run this piece would provoke strong reactions. The now famous letter by English professor Julie Orlemanski (re-posted by journalist David M. Perry on his blog How Did We Get Into This Mess?), was only one of many that we received—some in protest, others in support. The piece has also elicited responses from Usama Rafi, in the Chicago Maroon, and most recently Aaron Hughes for Religion Bulletin. Additional press coverage of Fulton Brown’s writings on Yiannopoulos—via The New Republic, Chicagoist, Patheos, The Guardian, etc.—has for the most part focused not on her Sightings essay but rather on the contents of her personal blog, though the former no doubt played a role in drawing attention to the latter.

Some argue that the Fulton Brown essay does not meet our editorial standards. I must disagree. We exist at the intersection of scholarship and a general audience—a precarious position, to be sure. While our guidelines articulate an ideal to which some of our authors aspire, and which many of them do attain, even the quickest of searches through our archive will reveal that the vast majority of columns over the 20 years of our existence have in fact been much closer to “op-eds” or cultural observation pieces than to peer-reviewed research articles. Many of these columns have included only a handful of popular media items among their resources; others—indeed most—have had no references at all. The reason few of these pieces have been met with such objection and protestation is that the views expressed in them were, simply put, less controversial. Still, this is far from the first time that Sightings has opened itself up to controversial opinions: see, e.g., Jean Bethke Elshtain’s “An Extraordinary Discussion” (October 3, 2001) or Jean-Luc Marion’s “After the ‘Charlie Hebdo’ Massacre: Islam Must Open Itself to Critique” (January 29, 2015).

I decided to publish the Fulton Brown essay, knowing full well that to do so would be to invite controversy, because I found in it what one of my undergraduate mentors, Jonathan Z. Smith, once memorably termed “an occasion for thought.” Below, dear reader, you will find seven individual responses—four full-length essays and three shorter comments—occasioned by this column as well as the ensuing controversy. Taken together, they provide a snapshot of the debates that have been occurring on our campus, and across the country, these past two weeks. Some of the respondents are critical of my decision to run the piece; others are broadly supportive. All take issue with certain aspects of the piece itself. Yet all of them also testify to the importance and timeliness of the issues which the piece raises: the commitment to free expression, and its limits; the relationship between “religion” and “culture” (“Western,” “Christian,” or otherwise); the place of religious studies within the modern academy, and of theology within religious studies; the intellectual, social, and ethical responsibilities of scholars, educators… and editors.

See All Articles by Various Authors