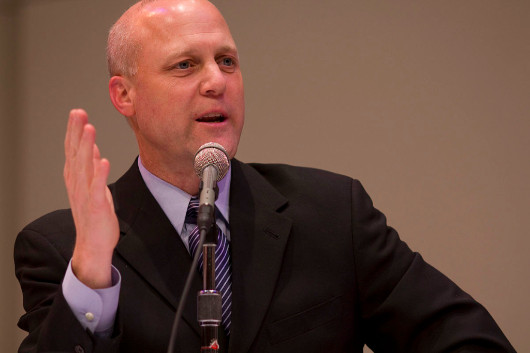 Recommended homework for Americans on Memorial Day: read, don’t simply read about, the talk Mayor Mitch Landrieu delivered in New Orleans last week. (To make the task of locating it easy, we provide a link; see “Resources.”) As for “reading about” the talk, we do not lack commentary from analysts who are interested in eloquence, the destinies of the republic, and finding ways for citizens to address the future in times of chaos. Frank Bruni, in The New York Times, captioned his comment “This is Eloquence, Remember That?” Some are considering Landrieu’s efforts comparable to those of Abraham Lincoln, Martin Luther King, Nelson Mandela, and other modern prophets.

Let me compare Landrieu’s genre to the forgotten language and intentions of the ancient Hebrew prophets. Landrieu addressed his city as “a people.” So did the prophets, like Jeremiah, revered in and beyond Judaism and Christianity. Landrieu was defending the decision and act of taking down the city’s four most prominent icons—the prophets would have called them “idols”—in the form of statues commemorating long-revered General Robert E. Lee and lesser Confederates who defended the enslavement of American blacks. The expressions of others before the removal of the statues were not always eloquent or healing: defenders of the statues and representatives of what the mayor would call the “Cult of the Lost Cause” often rallied with shouts or whispered with threats.

As the statues were being lifted up from their platforms and lowered to the ground, Landrieu—not to his or anyone’s surprise—was the subject of death threats. Yet, like Jeremiah, he spoke of “a future and a hope.” His speech exemplified Dietrich Bonhoeffer’s definition of prophecy as “hope projected backward.” In a time of bitter divisions in New Orleans and throughout the nation at large, Landrieu spoke not as a great denunciator, but as a great enunciator of directions for his contemporaries to take. Unmistakable was his identification with his great city, to some of whose many assets he referred in terms that a tourist bureau could envy.

Landrieu, from a prominent political family, with all the ambiguities that such an identification suggests, was almost pastoral in his regard for his audience and us non-New-Orleanian overhearers. He reminded locals that their city was America’s “largest slave market,” their state a place where 540 Louisianans had been lynched and where “Freedom riders coming to New Orleans were beaten to a bloody pulp.” Landrieu’s words reflected his Roman Catholic tradition, along with many other inspirations for critical preaching and constructive counsel. They inevitably called to mind the religious language of confession and a call to repentance. By some accounts, the act of repenting is not really about the irrecoverable past: New Orleans’s past is past! It is instead about experiencing and nurturing a change of heart.

Yes, Frank Bruni, eloquence has rarely characterized recent public speech. But now and then we hear it, or read it. In this case we are invited to join with those people whom Landrieu addressed as a people, to which Americans at large belong or, in this case, are beckoned. Memorial Day allows us the time and the occasion for a confession about the now dead past and a call for a living future.