Martin Luther King Jr. "Nonviolence Is the Sword That Heals

“I forgive you.” At the hearing for Dylann Roof, the daughter of Ethel Lance, one of the people Roof killed, told him: “I will never talk to her ever again, never be able to hold her again

At the hearing for Dylann Roof, the daughter of Ethel Lance, one of the people Roof killed, told him: “I will never talk to her ever again, never be able to hold her again. I forgive you and have mercy on your soul. You hurt me, you hurt a lot of people, but I forgive you.”

If Sunday is celebration at Emanuel African American Church in Charleston as in other Christian congregations; Wednesday is preparation. Bible study is the midweek oasis, the recharging station, the momentary respite from the daily grind. The sanctuary is empty save the small gathering of the faithful bolstered only by ranks of pews sporadically populated with idling purses, totes, backpacks, and coats. Friends greet each other with ties askew, collars undone, comfy shoes unashamedly clashing with workaday chic, first names on the breast pockets, shirt tails set free, and the lingering scent of a workday done. It is the embodiment of fellowship.

On Wednesday, June 17, 2015, Roof violently betrayed that fellowship when he shot and killed nine of the faithful gathered at “Mother” Emanuel.

What followed was a display of endurance and compassion that saved the city of Charleston and possibly, at least for the moment, the country. In the wake of the deaths that followed in Ferguson, Baltimore and New York, Mother Emanuel, as she has throughout her history, endured.

It was Dr. Martin Luther King Jr. who injected into the collective consciousness of the country the strategic use of suffering and, as displayed in the forgiveness of Roof, the redemptive power of forgiveness.

It has proven as an effective means of combating the dark side of American exceptionalism so poignantly articulated by Alexander Stephens in his 1861 “Corner Stone Speech.”

Our new [government’s] foundations are laid, its corner-stone rests, upon the great truth that the negro is not equal to the white man; that slavery subordination to the superior race is his natural and normal condition. This, our new government, is the first in the history of the world, based upon this great physical, philosophical, and moral truth.

The idea of the “sword that heals” has become part of the strategic toolkit of African American civic rituals. Nonviolence, King preached, “is a powerful and just weapon which cuts without wounding and ennobles the [person] who wields it.” Nonviolence, he added, is “a sword that heals.”

At the anniversary of the “Million Man March,” Louis Farrakhan advocated forgiveness and non-violence as an effective means of dealing with violence within the African American community. However, he questioned its efficacy with respect to dealing with interracial violence.

The violation of Wednesday bible study was an audacious transgression but one familiar to the African American community. Such violations of human decency are part of the American enterprise and have dogged the African presence in the Americas since the time of Gaspar Yanga (b. 1545), the leader of a colony of fugitive slaves in present-day Mexico that was (unsuccessfully) attacked by the Spanish.

Those familiar with U.S. history will recognize that, at the heart of African American identity, is the experience of being forced to plead “I am human”—a ritual that Rev. Dr. Cheryl Townsend Gilkes calls contested humanity. In contrast, at the heart of white American identity is a self-reflexive contemplation on an imaginary blackness, a domestic other, at once enemy and fetish.

It was James Baldwin, in his letter to his nephew on the occasion of his fourteenth birthday, who advised acceptance with love of “innocents” like Dylann Roof because, Baldwin wrote, “they are trapped in a history they do not understand,” they are “losing their grasp of reality,” and are seized by a “mortal fear of losing their identity.”

The ritual forgiveness that has become the African-American response to tragic outcomes imposes an obligation on those who are forgiven: the setting-aside of a demand for retribution requires the assurance of justice. Otherwise, the legitimacy of justice is jeopardized and the social contract on which the Republic stands risks being invalidated.

The effect of ritual forgiveness is the point of departure between Farrakhan and the congregation of Mother Emanuel.

Where Farrakhan is cynical about the reforming power of forgiveness in the case of someone like Roof, the congregation of Mother Emanuel chooses to trust in what King called beloved community and to find ways to affirm an American identity without contesting the humanity of those who harm them and without turning them into an imagined, radical other.

“When will we be able to stop pleading our case that we are human?” Yale University website, March 14, 2013. http://storm.yale.edu/news/when-will-we-be-able-stop-pleading-our-case-we-are-human.

Photo: Parishioners pray and weep during services at the Emanuel A.M.E. Church, Sunday, June 21, 2015, in Charleston, S.C., four days after a mass shooting that claimed the lives of their pastor and eight others. Credit: David Goldman, Pool / AP Photo. 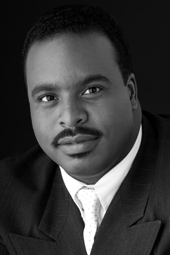 Author, Rory Johnson, (Ph.D. University of Chicago Divinity School) is Assistant Professor in the Department of Comparative Religion at Miami University in Oxford, Ohio. His work focuses on the intersection of religion, aesthetics, technology, and economy. He was a 2005-06 Junior Fellow in the Marty Center.

Alas, what Rory Johnson calls “the dark side of American exceptionalism” implies that Alexander Stephens, whom he quotes, speaks for the American founders.  However, the “new government” Stephens spoke of was not the Constitution framed in 1787 but the constitution of the ConfederateStates of America (CSA) framed in 1861.  Stephens was the Vice President of the CSA and actually had the following to say about the American founding generation:

The prevailing ideas entertained by him [Thomas Jefferson] and most of the leading statesmen at the time of the formation of the old constitution, were that the enslavement of the African was in violation of the laws of nature; that it was wrong in principle, socially, morally, and politically. It was an evil they knew not well how to deal with, but the general opinion of the men of that day was that, somehow or other in the order of Providence, the institution would be evanescent and pass away. This idea, though not incorporated in the constitution, was the prevailing idea at that time. The constitution, it is true, secured every essential guarantee to the institution while it should last, and hence no argument can be justly urged against the constitutional guarantees thus secured, because of the common sentiment of the day. Those ideas, however, were fundamentally wrong. They rested upon the assumption of the equality of races. This was an error. It was a sandy foundation, and the government built upon it fell when the “storm came and the wind blew.”

I dare say, Abraham Lincoln couldn’t improve on that synopsis of the Founders’ predicament regarding slavery’s existence in America prior to the formation of the American republic in 1787, and hence the true understanding of American exceptionalism: namely, the fundamental equality of all human beings, which Martin Luther King famously cited as “the true meaning of its creed.”  Stephens’ version was rejected by a majority of white Americans at the cost of a devastating civil war that both saved American self-government and produced the emancipation of 3-4 million black Americans.

I do like the quote from James Baldwin, who spoke of white Americans who mistakenly believe that their identity and security requires the diminishing of black people: “they are trapped in a history they do not understand,” they are “losing their grasp of reality,” and are seized by a “mortal fear of losing their identity.”  Ralph Ellison said as much, too: “he’s got them caught between what they profess to believe and what they feel that can’t do without” (Juneteenth, 35).

The role that forgiveness has played—that Christianity has played—in the development of American society and politics is worth pondering, and which literature has done a much better job exploring than politicians—no surprise.

See All Articles by Rory Johnson