“Loving Justice” and the Refugees at Our Border

Does religion offer an alternative to the economic notions of justice that dominate how we think about the refugee crisis facing America?

The United States recently hit a new low in its demonstration of inhumanity. During relief efforts in the Bahamas, in the wake of hurricane Dorian, individuals who did not have a visa to the US were told to disembark a rescue ship. They were not permitted to find refuge in Florida. Apparently, a deadly category 5 hurricane did not warrant the temporary suspension of document requirements.

The Trump administration just recently made drastic cuts (again) to the number of refuge seekers who may enter the United States. The Supreme Court has just allowed the country to bar most migrants—particularly from Central America—from seeking asylum in the US. Migrants cannot apply for asylum unless they have already tried, and failed, to receive it in one of the countries they passed through on their way to the US. People from El Salvador, for example, would be returned to Guatemala, hardly a safe place. The president of Refugees International, Eric Schwartz, reports, “At a time when the number of refugees is at the highest level in recorded history, the United States has abandoned world leadership in resettling vulnerable people in need of protection. The result is a world that is less compassionate and less able to deal with future humanitarian challenges.”

Trump’s henchmen cite expense—for processing refugees, for helping them re-settle from the war-torn and famine-ridden environments they flee—as the reason for the new limits on admitted refugees. The irony that America is a country of refugees—marked by their flight from life-threatening persecution and poverty—is no accident. My own grandmother fled pogroms in Latvia, and her sisters who could not make the arduous journey with their young children were murdered with their children. I know of no one in America who lacks a traumatic past.

And now the traumas being fled in the present are deepened, sometimes even exceeded, by the outrageous response at hostile destinations. In America, children are forcibly separated from their parents and put in cages, without beds, without even adequate clothing and nourishment, with no guaranteed end in sight for their plight; the nation’s pediatricians have published collective petitions about the psychological damage to these children—to deaf ears. So-called illegal residents are ripped from their families, jobs, and studies at universities, held as criminals and deported to places they have never lived where languages are spoken they do not understand, and to places where the danger that awaits them is no relief from that which they are fleeing. Immigrants have perished crossing rivers, deserts, and oceans; they have been abused, attacked and after they have been deported, many have died.

What is going on here? Where is justice? So much thinking about justice relies on economic models: the price of an injury, the price of violating a contract, the distribution of resources according to formulas. When the measures are made, they presuppose scarce resources. Lines are drawn and borders are sealed to secure those resources for some and deny them to others.

But mark how radically different another idea of justice is, one that is over two millennia old. “The stranger that dwells with you shall be to you as one born among you, and you shall love him as yourself.” That radical language is in, of all places, the Hebrew Bible. There, justice is not an economic principle that apportions scarce resources; rather, as care or “love” that we owe one another, it issues from an unlimited, ever-renewing supply. This remarkable vision, the so-called “love command” in the Bible, joins commands about loving the neighbor (a better translation of re’ahka would be “fellow human”) and loving the stranger, to loving God, with the implication that one cannot love God without also loving the stranger.

In Leviticus, the widow, the orphan, and the poor are especially singled out for this love. Our “fellow human” is described as someone who does not have enough, and so we must feed him, as someone who is away from home, and so we must be hospitable to him. The fellow is also depicted as including someone who is vulnerable to exploitation, lied to, robbed, someone whose wages can be withheld, someone who can be slandered, who can be hated, and someone, moreover, from whom that hatred can be hidden instead of having his offense openly explained to him. The list also includes someone who cannot speak and someone who cannot see. In short, one’s fellow human is not figured here as a fortress of strength, self-sufficiency, or autonomy—the modern imaginary subject whose right to freedom must be protected. No, the fellow human from the poor to the stranger, from one who is speechless to one who is blind, is the very portrait of vulnerability. What then does it mean to love such a fellow human? To respect him, indeed, but far more: to help him.

This biblical model is a long way from the mentality of nations that make it illegal for them to cross borders and lawful to dehumanize those who do.

Importantly, this biblical account describes all humans as in need, and all humans sharing the obligation to help. The universality of the human condition of exile is underscored in the midst of this very command to love the stranger: “the stranger that dwells with you shall be to you as one born among you, and you shall love him as yourself; for you were strangers in the land of Egypt” (Lev. 19:34 KJV). This single verse—“the stranger among you shall be as one born among you, for you were strangers”—is given wider compass in the biblical story of ancient Israelites exiled in Egypt and exiled again in Babylon. And such exile is not confined to one people.

In the story of the first man and woman, all of humanity is described as separated from their homeland. Here is Milton’s rendition of this forced exile:

They looking back, all th’ Eastern side beheld
Of Paradise, so late thir happie seat,
Wav’d over by that flaming Brand, the Gate
With dreadful Faces throng’d and fierie Armes:
Som natural tears they drop’d, but wip'd them soon; [645]
The World was all before them, where to choose
Thir place of rest, and Providence thir guide:
They hand in hand with wandering steps and slow,
Through Eden took thir solitarie way.

Would that their heirs could choose a place of rest. Instead, refugees are often in flight, never resting. Never home. The injunction to treat the stranger as one born among us—the love command that Christ said was the sum of the Law (Matt 22:36-40) and that Paul endorsed as fully, “Love does no wrong to another; therefore, love is the fulfilling of the law” (Romans 13:8-10)—seems to have been tragically forgotten by so many world leaders and many of their populations. Instead, people have fallen back on the principle of scarcity, and believing their resources are scarce, they want to hoard them, or they are afflicted with fear of difference. And underneath it all, they want, desperately, to live in denial about their own condition of exile. Migrant knowledge is knowledge in denial.

For when we fail to respond humanely to individuals in flight from crises, we are not only in denial about their vulnerability, but also about ours. This includes not facing up to the fleeting nature of life on this planet, the ceaseless movement through time and space that characterizes life itself, with the loss that inevitably haunts it, of loved ones, of loved places, of cherished moments. We are in denial, too, about the fragility of our homeland. At a time when we know there are no indigenous peoples, that everyone outside of Africa is a migrant from there, at a time when we know that global warming will increase the numbers who must migrate from tens to hundreds of millions, we would rather not know of our fundamental exilic condition. This denial has devastating consequences, for the victims of that denial are our fellow humans, who need our help, now. Chris Abani writes, “There is something about the way that refugees, more than any other kind of displaced peoples, haunt the assurances of stability that modern statehood aspires to. Perhaps because this body is proof that we have advanced much less in our ‘humanness,’ than we would like to believe.”

Shakespeare addresses this poverty of humanness. Sir Thomas More, a play penned by many hands, including Shakespeare’s, includes a passage that has survived, remarkably enough, in Shakespeare’s own hand. It is a speech given by Thomas More in his capacity as sheriff of London, when he addresses a violent mob, hostile against foreigners on Ill May Day 1517.

Grant them removed, and grant that this your noise
Hath chid down all the majesty of England;
Imagine that you see the wretched strangers,
Their babies at their backs and their poor luggage,
Plodding to the ports and coasts for transportation,
.           .           .           .           .           .
And you in ruff of your opinions clothed;
What had you got? I’ll tell you: you had taught
How insolence and strong hand should prevail,
How order should be quelled; and by this pattern
Not one of you should live an aged man,
For other ruffians, as their fancies wrought,
With self same hand, self reasons, and self right,
Would shark on you, and men like ravenous fishes
Would feed on one another.

The haunting image of exiling “wretched strangers, their babes at their backs and their poor luggage plodding to the ports and coasts,” searching for a place to go, is, in our time, realized in photojournalism: images of refugees ever moving. But here, More does not only prophetically conjure the brutal treatment of “others.” He knows that if a code of self-interest prevails—“self same hand, self reasons, and self right”—the victimizers will also be victimized. ♦ 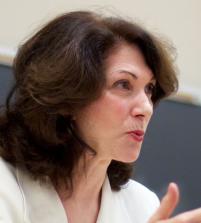 Author, Regina Schwartz, is Professor of English at Northwestern University and is the author of Loving Justice (Oxford University Press, 2017), a radical critique of economic notions of justice.