Love, Obligation, and Possibilities in the Time of COVID-19

Even in this season of prescribed social distancing, hope for our future emerges from our bonds with one another

When I began thinking about this column over a month ago, the image that came to me as I considered how Mara H. Benjamin's The Obligated Self: Maternal Subjectivity and Jewish Thought (2018) might inform our response to climate crisis was a contra dance move called the pull by, in which each dancer grasps the hand of the next partner in the circle, pulling each other along to the next and the next and the next. This image of concentric rings of dancers passing each other in a braided round seemed the perfect enactment of how we might take hold of each other and make order and beauty out of the complications inherent in this situation, a way to begin talking about the complex dynamics Benjamin sees in the relationships between God/mothers and Israel/children. And then COVID–19 complicated that, as it has so much else. My notion now seemed naive in a world where viral videos showed people fighting over the last rolls of toilet paper in the supermarket and Queer Contra Chicago’s monthly dance, which means so much to me as a celebration of fluidity and love, was canceled along with so many other gatherings. Sites of connection had become potential sites of contagion.

“I feel like this is a slow-motion 9/11,” one of my colleagues told another, an apt description for a situation that has stripped away our illusions of safety and surety, leaving us with the fear that whatever we do in response, it won't be right, and nothing will ever be the same ever again. Immunologists and ecologists project that viral incursions like this will become our new normal, abetted by the same patterns of globalization and consumption that drive the climate crisis. Moments of connection amid the quarantining, from singalongs conducted from windows and balconies, to various faiths’ responses of  “spatial solidarity,” offer some relief, but it is clear that these times will test our bonds with one another, as well as the ways we might use them to move forward into a “useable future,” to use Martin E. Marty’s phrase. “Stay safe,” people now say to each other in parting, but will a concern for safety alone be what saves us?

Roxanne Gay, who refused to wish new graduates “good luck” when she gave a commencement speech last year, would certainly say no. She did this because she believes that luck, like hope, “allows us to leave what is possible in the hands of others,” when “[w]hat we must really wish for one another is the power of all that might be possible if we do anything more than hope.” I suspect that Gay—a social critic of some subtlety—overstates her “case against hope” in order to shake her audience out of a naive understanding of the concept, one that waits for some greater power like God or Science to save the day, the way a young child seeks a parent’s intervention when things go wrong. She is, in fact, promoting a less simplistic sort of hope when she insists that we would be able to “imagin[e] the impossible to be possible,” even if it would “make us uncomfortable” to do so. To insist that we do not have that capacity would be to give in to what Rebecca Solnit, in her “Letter to a Young Climate Activist on the First Day of the New Decade,” has termed “naive cynicism,” a jaded pose that forgets the many times when “change… was unimaginable until it happened.” Like Gay’s naive hope, Solnit’s naive cynicism is “an excuse to give up instead of trying,” when what we should be focusing on is that “given half a chance some of the natural world will survive, and giving that chance depends on us.”

Solnit tells the young activist, "Galicia, the fury you feel is the hard outer shell of love: if you're angry it's because something you love is threatened and you want to defend it." How much greater the fury—and the frustration and disappointment—when what is threatened and what is threatening are the same, namely the people who put their own convenience or comfort ahead of the measures that would ultimately save their and so many other lives. Mayor Lori Lightfoot appeared to feel all that when she recently chastised Chicagoans who were congregating in lakefront parks and beaches before she ordered them closed, prompting one Twitter user to joke, “Lori Lightfoot is the mom who actually turned the car around because we didn’t behave.” Lightfoot has the power to close the parks, but it is up to all of us to “behave,” both in the COVID–19 crisis and in the larger climate crisis of which it is very much a part.

Like the tweet above (albeit in a more serious vein), Mara H. Benjamin’s The Obligated Self views this dynamic of power and obligation through the lens of maternal experience. She argues that doing so reveals that these aspects of human and divine subjectivity are grounded in concrete experience rather than the more abstract I-Thou (Martin Buber), and embedded within a love that can inspire both fury and restraint, one that may be constrained but never abates. By daily taking on what the rabbis of the Talmud called the “yoke” of the mitzvot, observant Jews enact an obligation which is “always already in, bonded to, and responsive to a world,” and to the One who created the law and world alike (p. 15). The God of the Torah, in turn, “births a people to love… who will, by definition, drive [God] crazy,” instigating a “dynamic, volatile, and keenly attentive relationship” that makes God at once powerful and vulnerable (pp. 25, 32, 50). Benjamin gradually widens her focus from this primary dyad to include co-parents, caretakers, and even the neighbors God commands us to love, whether they become “conscripted into the work of mothering” when they witness a tantrum, or are part of the general mass of society in which mother and child alike engage in “the endless work of learning to be a human in the world” (pp. 122, 126). Power and obligation are relational, flowing back and forth across permeable boundaries, always engaged with the world in all its complexities.

Benjamin’s work suggests that whatever possibilities we imagine must be grounded in the mess of everyday life, not the purity of abstract principles: what will survive will be the result of the daily human actions, both large and small, that will manifest those principles in the world. We cannot assume that some powerful entity will bail us out of either the COVID-19 pandemic or the climate crisis without any effort on our own part; neither religion nor science nor politics can be sustained by such a simplistic understanding of power, in which the individuals who would carry these deeply human enterprises forward remain passive in the face of such extremities of love and fear. Instead, we must join hands—for now virtually, in this season of prescribed “social distancing”—pulling each other forward in patterns that gain energy from their complexity. The possibilities we can imagine, and our obligation to make them a reality, depend upon it.  ♦ 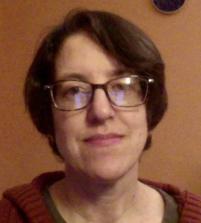 Author, Stephanie Friedman (MA’91), is Director of Academic Programs in the Summer Session Office in the College at the University of Chicago.

See All Articles by Stephanie Friedman