Eugen Rosenstock-Huessy, Michael Oakeshott, Paul Ricoeur, Jose Ortega y Gasset, and Maurice Merleau-Ponty are a few names of thinkers-about-history who have influenced me and whose books form something of an unofficial “canon” on my shelves 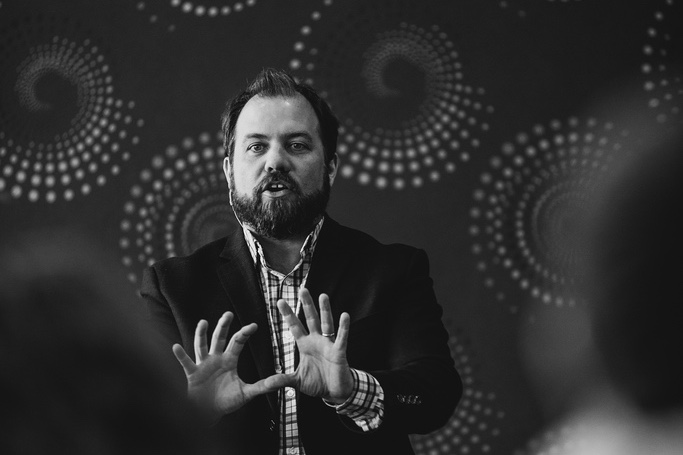 Eugen Rosenstock-Huessy, Michael Oakeshott, Paul Ricoeur, Jose Ortega y Gasset, and Maurice Merleau-Ponty are a few names of thinkers-about-history who have influenced me and whose books form something of an unofficial “canon” on my shelves. Is it perhaps time now to add another name—Jamie Smith, or, more properly, James K.A. Smith—to this collection? How did he get a bid toward my canon, not to mention the canons of others? Smith might have remained an outlier on this list, but Patrick Gilger’s recent, and uncharacteristically longish, six-page feature of Smith in the Jesuit weekly magazine, America, alerted me to an overdue sighting for Sightings. Smith is findable “all over the place,” but Gilger’s is a particularly reliable introduction, useful for our purposes.

Most thinkers-about-history are known by a phrase that captures the heart of their thought. In Smith’s case that phrase is “cultural liturgies.” Gilger: “[Cultural liturgies] gives name to an idea that what we do teaches us how to love. It is meant to help us see how repetitive practices—like shopping or binge watching or decorating our Christmas trees—point our hearts in a particular direction and by doing so tell us who we are and where we belong.” Gilger informs us about Smith’s literary lineage, which includes some influence by theologian Stanley Hauerwas as well as, nota bene, philosophers Alvin Plantinga and Charles Taylor. We also learn that Rod Dreher, known for his much-discussed “the Benedict Option,” is intellectual kin-enough to inspire some rivalry and polemics.

Smith teaches at Calvin College in Grand Rapids, where, as a convert, he has found a congenial home. Smith’s fresh approaches to theology have drawn increased attention to Calvin, a college located in flyover country and hardly on the radar of most “Ivy-Leaguers,” if at all. His are not postscripts to essays on “post-modernism,” nor reruns on the like. And scholars are increasingly coming to reckon with him as his books and articles are mainstreamed. Many who have taken to him are drawn by his choice not to write only for academics. Colleague Matt Walhout, a professor of physics at Calvin, charges that “professional academics are all writing for one another.” Walhout recalls Smith telling him “somebody’s got to write for the church.” But don’t mistake this for “dumbing down.” To dispel any such misunderstanding, Gilger tells of Smith assigning Charles Taylor’s 900-page tome, A Secular Age, in a class of Calvin seniors, one of whom said of Taylor, “it’s like he’s reading our mail,” going on to remark that he found Taylor to be intellectually stimulating. Students say the same about Smith’s approach.

I don’t think that Smith is alone in what he is doing from his Reformed outpost in Grand Rapids. My own compromised Reformed genes are Swiss, not Dutch like Smith’s, but his concerns have certain resonances with my own scholarship. For instance, instead of writing a history of dogma about Americans I opted rather to provide glimpses of American religion in A Nation of Behavers (1976). Indeed, there are many of us who share the St. Augustine-like sense of public-mindedness that animates much of Smith’s work. He does not look for a church that sequesters itself, but one that “leans boldly and hopefully into the world for the sake of our neighbors.” He appraises our culture and speaks for many of us when he observes “People are exhausted. I already see manifestations and artifacts of people saying ‘This isn’t working.’” But Smith sees and hears not endings but opportunities.

Smith wants to see religion exposed, not hidden. He believes “institutions are still some of the best ways we care for the vulnerable. Government is a creational good.” He celebrates friendship and laughter and families and public schools. In no sense an enemy of intellect, he merely wants to see it properly located, and busy. “Look, people are not going to be argued into the kingdom of God. The irony is that I’m a philosopher who thinks that you woo people and move them more with literature than syllogisms.” He speaks fondly of the “white-shingled slightly run-down Sherman Street Church” which he and his wife and four children see as a “just a ho-hum place” that hums “where we’re all learning how messy and hard it is to just be a community—and then to be a community for a community.”

I have yet to circle back to the meaning of a word in Smith’s phrase, “liturgies,” as he notices them and uses that word. I’ll close with a “for instance,” which is seasonally relevant and instructive: last November Smith wrote a column for the Washington Post titled “The NFL’s Thanksgiving games are a spectacular display of America’s ‘God and country’ obsession.” He elaborated:

The tropes of “God and country” or “faith and the flag” are almost always instances where country and flag domesticate faith in God. Or, to put this in terms that the religious folk should understand: These liturgies of civil religion are covert modes of idolatry. The rank and priority are reversed; our political identities trump all others. This is how stadiums become temples of nationalism. When the Constitution functions like Scripture, and the pledge serves as our creed . . . then a swelling patriotism becomes our religion and dissenters are heretics. We might not thank God anymore, but that doesn’t mean Thanksgiving isn’t still religious.