Of Islam and the Public Square: The Role of the Classroom

An opinion poll showing 31% of Americans feel safer because of the travel ban placed on seven Muslim-majority countries (since reduced to six)—with another 41% expressing no particular opinion—is reflective of the obscure, if not fearsome, image of Islam in many Americans’ minds 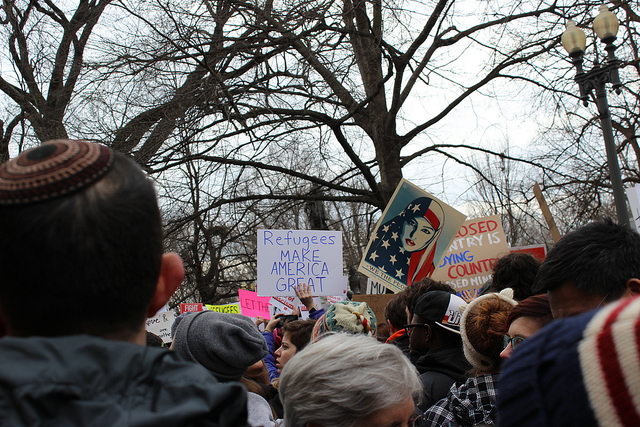 An opinion poll showing 31% of Americans feel safer because of the travel ban placed on seven Muslim-majority countries (since reduced to six)—with another 41% expressing no particular opinion—is reflective of the obscure, if not fearsome, image of Islam in many Americans’ minds. Amid the judicial disputes surrounding the order’s implementation, noteworthy are the “acts of bigotry and hatred,” such as violence against women, offered as justification for why these countries were selected. Not only do such statements present a monolithic picture of a complex and nuanced tradition, they also overlook the fact that similar acts happen here in the United States.

As academic students of Islam, we see this rhetoric as part of a larger pattern. Outside the classroom, upon hearing of a crime committed by a Muslim in the name of his or her faith, many Muslim scholars and lay practitioners quickly and strongly condemn these actions, differentiating between core Islamic teachings and the acts of those who appropriate them. Nevertheless, many Americans, whose only exposure to Islam and Muslims comes through such media reports, are naturally led to form negative opinions about the religion and its adherents.

In this environment, the classroom is an inherently politicized space, and a space of vulnerability. Islamic Studies classrooms in the U.S. allow students to engage critically with key Islamic sources. They are also one platform, among others, for complicating the monolithic vision of Islam so prevalent in this country. Not that the minds of the 72% of Americans who feel positive or indifferent toward the “Muslim ban” will be easily changed, but the scholarship coming out of these classrooms has a crucial role to play.

In an article titled “Faith in the University,” Rowan Williams discusses the importance of fostering universities’ sense of responsibility toward the larger society. While acknowledging that the university should provide a “distant” and “objective” voice, as opposed to imparting faith or belief, Williams argues that academia cannot remain indifferent to the “sphere of human commitment and hope.” The university, he says, “has to be prepared to reflect on the human project it represents.” If this task is unmet, then the university risks its own dehumanization. Rowan concludes: “We cannot afford to sit light to the task before us, the task of preserving the humanness of education itself.” At a time when the most vulnerable members of society, in particular Muslims, are readily targeted, educational institutions are no less threatened—and no less responsible. The question of the role of the educator in the public square is a crucial one. How should we act as students and scholars of Islam?

There is a widespread lack of information and contextualization of Islamic teachings and history in the U.S. Islamic Studies itself is still a nascent discipline in this country, having only begun during the 1950s. As students of that discipline, our engagement with sources is both the beginning and the end of our philological and theoretical training. Sources like the Qur’an or Prophetic traditions (ahādīth), for instance, are not only foundational for understanding the beliefs central to the Muslim worldviews and psychologies, but also direct and indirect sources of inspiration for their cultural productions. A study of Islam as a civilization—including literature on aesthetic productions in poetry, art, and architecture, as well as history and politics—is also critical for contextualization. We can meander and muse to our heart’s desire, but as researchers and scholars our inquiry must be guided and contained by the texts and facts (hopefully not “alternative” ones!) at hand. The classroom is a training ground for humbling ourselves to material we may initially find strange or irrelevant. It is also the space where our questions become meaningful and relevant to scholarly and public debates of the past and present. Checking our sources is a skill we need to practice continuously and impart to others. It is essential to the classroom and to the wider public conversation on Islam.

Conversations around the Classroom

Conversations in the classroom begin by assessing the data at hand. Processing this information through contextualization is the second step. Finally, critical engagement with the material allows for the cultivation of a creative, independent scholarly voice. Creativity means making meaningful contributions and giving direction to conversations of the past and present, not speaking out of or into a void. Scholarship is not a solitary act, but a conversational one. It is a conversation with the text, one’s instructors, fellow students, and the wider public experience. This conversation has to be met with patience, reliable sources of information, and a willingness to withhold judgment, e.g., admitting when we don’t know something—or as Muslim scholars like to say at the end of their writings, Allahu ʿalam: “God is most knowing.”

Much of the public discussion of Islam lacks depth precisely because we want it to be easy, to conform to our preconceptions. The classroom counteracts this tendency through a commitment to, and perhaps faith in, the practice of rigorously analyzing and reanalyzing primary sources and our positions on them. Our discussions, whether in the classroom or in the public square, have to aim for nuance, with patience and humility, while at the same time acknowledging the indispensability and urgency of communication.

The production of knowledge on Islam and the Middle East is at a critical juncture, with rhetoric of separation and hate now the norm. Scholars can help to break down essentialisms, open up dialogue, and add differing and fresh perspectives to the monolithic stance promoted by speech that reaffirms hate. In October 2014 the Islamicate Studies Symposium at the University of Chicago hosted a conference to celebrate the 40th anniversary of Marshall Hodgson’s The Venture of Islam. Scholars from across the country debated this foundational work for teaching Islamic civilization at the University. There was much on which the participants could not agree. Would they still teach the work themselves? Was it useful, or outdated?

Above all, what the conference showed is that scholarship is better equipped than it was 40 years ago to produce nuance in thinking about Islam. Having simmered in Edward Said’s critique of orientalism and the responses to it, many scholars are conscious of their own role in constructing knowledge about Islam and seek to create space for dialogue beyond description. The classroom is one space where such dialogue can happen, while research can offer subtleties beyond the black-and-white depictions of Islam prevalent in America today.

Finally, there is an opportunity for Islamic Studies in the U.S. to include a wider range of subjectivities. Muslims and people from the Middle East are increasingly present in the classroom. Indeed, many international students and professors in this field were affected by the recent travel ban. Moving forward, we must continue to listen to and humanize each another—even when we disagree. We must draw upon the strength of our diversity in order to learn from one another and our different perspectives. Through such engagement with its own diverse population, the Islamic Studies classroom can model and influence a more productive and interesting dialogue for the general public.

Scholarship in a Post-Truth Society

Scholarship is called into question when factuality becomes an alternative, a choice, not a matter of our deepest concern. In the Poetics, Aristotle argued that poetry is the least of all verifiable arts of language. In contrast to the demonstrative syllogism, whose premises are necessary and hence objectively verifiable, poetry is subjective, producing not conviction but the resemblance of conviction. Commenting on Aristotle’s Poetics, the Persian Muslim philosopher Avicenna stated that this resemblance, rooted in our imagination, moves the soul into compliance with a truth that is universally true, but not necessarily historically or factually true. Poetry is therefore closer to philosophy than to history, in that it deals with universals rather than matters of fact. These philosophers’ efforts showcase their deep sensitivity and care that each type of speech be put in its proper place. Separated by centuries, religions, and languages, Aristotle and Avicenna remind us that though the struggle for the truthfulness of language is not new, it is shared by and of concern to all, regardless of time or space. By imparting this same sensitivity and care, both in the classroom and in the public square, our scholarship can serve as a reminder of the humanness of education, and the humanity of those we think different.

- Dahiyat, Ismail M. “Avicenna's Approach to the Poetics.” In Avicenna's Commentary on the Poetics of Aristotle: A Critical Study with an Annotated Translation of the Text. Brill, 1974.

Image: Rally at the White House against the Muslim ban, January 29, 2017 | Photo Credit: Amy Pratt (cc)
Sightings is edited by Brett Colasacco, a PhD candidate in Religion, Literature, and Visual Culture at the University of Chicago Divinity School. Subscribe to receive Sightings in your inbox twice a week. You can also follow us on Facebook and Twitter.

See All Articles by Zahra Moeini Meybodi and Allison Kanner