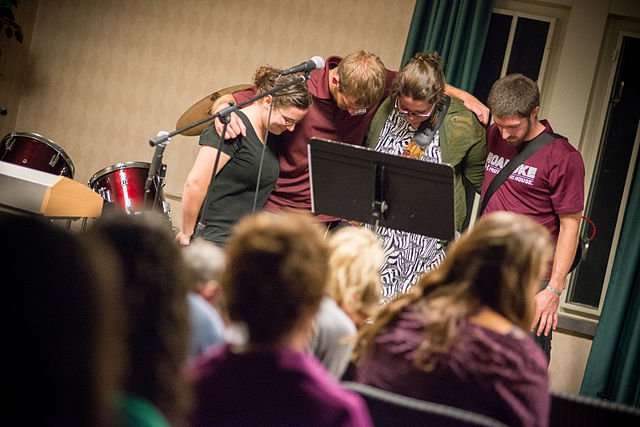 The world of Evangelical higher education keeps making news. Wheaton College in Illinois recently dealt with a flap over a faculty member’s theological comments about Christianity and Islam. She is no longer at Wheaton. And last week, the InterVarsity Christian Fellowship received some unwelcome attention. IVCF is an exemplary Evangelical organization which flourishes on 667 (!) college campuses nationwide. Its leadership announced that the Fellowship would begin “‘involuntarily terminating’ employees who hold a theological position supporting gay marriage.”

Had IVCF acted against employees or shunned volunteers who questioned almost any orthodox creedal position of the Christian faith, it would have created earthquake tremors inside the Fellowship itself, but non-Evangelicals would have taken little notice. It happens, however, that anything to do with 21st-century Christian faith and practice and sexuality and gender themes causes the quake to quake.

At once, in polarized America, respondents within IVCF and beyond took strong positions and flooded the Internet with arguments. Readers of Sightings know that we do not approach these complex issues as agitators, propagandists, or ideologues. Instead, we ask, in this case: What is to be the reaction of those who are not hostile to Evangelicalism and who have had positive experiences with—and, frequently, high regard for—IVCF and other such fusions of intellectuality and thoughtful dedication to issues with which campus-based Christians must wrestle? Two words: sadness and regret.

Defenders of the IVCF action (see Brown under “Resources”) wheeled out the big artillery, claiming the several New Testament references to homosexuality as decisive, and found no need to express sympathy for the many in the Fellowship, on campuses, and in larger Evangelical circles who have struggled within their own homosexual souls while remaining faithful to, and even exemplary in, their faith commitments and expressions. Critics of the IVCF action (see Vazquez under “Resources”) who are homosexual or who side with the experience of suffering LGBT fellow-believers speak of the leadership’s action as “spiritual abuse.”

Anyone close to people who have high stakes in this controversy might well have wished that the abrupt leadership response, in the form of exclusion or firing, had been paralleled by public conversation. Members on campuses and their chaplains and mentors often at least tentatively promote such, at the risk of being “outed” and “involuntarily terminated.” Note, now, the large number of Evangelical critics quick to ask for a more sympathetic hearing of the voices of the “spiritually abused.”

The incident came at a bad moment for the cause(s), because of the framework of “culture wars,” political exploitation, and media misrepresentations which prosper in the current climate. Faculty members and counselors of older generations regularly report that most current students and Millennials are baffled by the attention this one issue awakens: The kids don’t know what we are talking about; they are past all that. That does not make them right, but it does help reframe the issue. Christians of particular sorts don’t win all culture wars. But those close to discriminated-against LGBT people in their churches or on their campuses often quote the Apostle Paul: “...the letter kills, but the spirit gives life” (2 Corinthians 3.6). We know that that text is often misused, and not the last word on this subject. Still, it’s a cry to be heard from those who struggle and suffer or are spiritual counselors to those who live, and live with, these issues. They would say that it can be the first word in a new and needed conversation at a time when “spiritual abuse” of many sorts is again taking its toll on believing communities.

- Brown, Michael. “InterVarsity Learns That You Cannot Straddle the Fence When It Comes to Homosexuality.” Townhall. October 12, 2016.