Shortly before the end of 2022, a dramatic story of conflict in higher education hit the news. Initial headlines claimed, “An Academic Is Fired Over a Medieval Painting of the Prophet Muhammad,” and “PEN America Cites ‘Egregious Violation’ of Academic Freedom by Hamline University.” The story was that a Muslim student at Hamline University complained after having been shown a medieval painting by a Muslim artist in an art history class, and that the instructor of the course was subsequently fired. Numerous responses started appearing. A change.org petition was circulated. Weeks later, the name of the instructor in question was revealed, and eventually she spoke up in an online conversation about the incident posted to YouTube. While responses critical of Hamline circulated widely in higher education circles, in an official statement about the incident, the president of the university initially stood by her actions, saying, “academic freedom does not operate in a vacuum.” After the instructor in question, Erika López Prater, initiated a lawsuit against the university, its position softened. Instead of claiming religious discrimination and defamation, university officials noted that their previous position was flawed in not sufficiently accounting for the principle of academic freedom.

Following this story made me feel anxious, to say the least. When I read about how Professor López Prater had framed the issue of showing the image, I thought, that could have been me. I would have done the same thing. I would have done so with the privilege of tenure, which is an incredibly important distinction in this case. But, as I watched the coverage of the incident, I was also frustrated at what seemed to be a conversation that just wasn’t adding up. The various perspectives involved were not connecting with one another. In the responses to previous controversies involving images of the Prophet Muhammad, proponents of free speech on one side made claims that “Islam must open itself to critique”; diverse voices from within the Islamic tradition claimed alternately that 1.) images of the Prophet were in fact forbidden and 2.) images of the Prophet were not in fact forbidden. And many of those same points have been repeated in this most recent incident. How do we put these pieces together in order to form a more constructive dialogue? What else do we need to consider in order to think most fully about what happened at Hamline? What does this incident tell us about the intersection of religion with other identities, dynamics of power in higher education, and the study of religion in American higher education today? The study of religion can help us understand the intersecting issues and identities involved in this situation, and allow us to move forward while holding the complexity.

Diversity in Tradition, and Academic Freedom
In the Religious Studies classroom, we recognize that multiple sources of authority can be operating in a tradition, and that they may come into conflict or contradict one another. The question of coherence of a tradition in light of what may at times seem overwhelming diversity is a key methodological problem for the field. Recognizing ideas that may conflict with one’s own is a necessary aspect of learning about religion; this mirrors one of academic freedom’s most valuable tenets, i.e., the teaching of ideologies (including political and religious) disagreeing with one’s own. The discipline and the norms of academic freedom are telling us that the tradition can and should be taught in all its diversity and complexity. My own position is that both the field of Religious Studies and the principle of academic freedom suggest that Professor López Prater was justified in showing the image of the Prophet. And even more, this was not an Islamophobic image, nor Islamophobic action, given the details of how she handled it in the classroom, and the historical details about the piece of art that was shown.1

Religion’s intersections with race, climate at a PWI, and climate in the Twin Cities
However, even while standing by the norms of academic freedom, recognizing that the instructor provided warning in the syllabus about figurative representation of religious figures and in the class session in question, we cannot disregard the perspective and identity of the student involved, Aram Wedatalla, who also serves as the President of Hamline’s Muslim Students Association. Even given that students may be made to feel unsettled or disagree with materials they encounter in the classroom, it is clear that this incident became something of a flashpoint for the experiences of this student, and the experiences of students of color on the Hamline campus.

Teaching on the campus of a predominantly White liberal arts college, I can easily imagine that there is an issue with the racial climate on the Hamline campus. Having lived in Minnesota and been to the Twin Cities many times, I have also witnessed racism against the sizable Muslim Somali population in the area. Statistics at my own predominantly White institution, and those national statistics, reveal that students of color feel that they matter less in the classroom than their White classmates.2 Anecdotally, I can attest that the mental health of students of color is often impacted by the racial climate on college campuses, and there are many studies that show this as well. Knowing this, I understand how a moment of cognitive dissonance in the classroom could turn into a larger issue for a student of color.

This may strike some initially as a moment of straying from the original incident. Religion and race are two different things, you might be thinking. And they are... except for when they are not. While not all American Muslims are people of color, the identity of being Muslim in America is a racialized one. And beyond that, the student involved in this situation is a Black Muslim. The harm has come through the intersection of her racial and religious identities. As Kayla Renée Wheeler and Edward E. Curtis IV point out in their piece on the role of Blackness in this controversy, "Our many decades of learning and experience as scholars of Black American Islam tell us that the missing context is race. The Muslim students were hurt by what they saw as an attack on the dignity of the prophet, whether they are doctrinally correct or not."3

And therein lies the issue. The racial dynamics of the controversy matter, as do the religious ones, as does academic freedom, as do the labor politics of American higher education. To pose this controversy as a conflict between academic freedom (or free speech) and religio-racial inclusion is incorrect. Any serious conversation about this incident needs to begin with the recognition that both of these factors matter.

I maintain that the academic study of religion allows us to hold seemingly contradictory principles and points of view without flattening them, or placing them into direct opposition. A critical understanding of both the principles of academic freedom and the intersections of race and religion are necessary in order to understand the controversy at Hamline. Ironically, Hamline “sunsetted” their Religion department in 2021.4 While this may not have directly caused this dispute, I suggest that attending to the academic study of religion on a college campus can give a community a broader vocabulary for thinking critically about how religion intersects with other features of life such as race, gender, politics, and many more. The academic study of religion can allow us to hold complexity in thinking accurately and critically about the principle of academic freedom, diversity and student identity in the classroom, Islamic tradition, the intersection of race and religion, anti-Blackness, Islamophobia, and the labor politics of American higher education.

Don’t cut your religion department. Listen to your students. And protect your non-tenure-track faculty.

1 For more information about the painting, its history, and its usage in Art History classes, I recommend these pieces by historian of Islamic art Christiane Gruber. Christiane Gruber, “Islamic Paintings of the Prophet Muhammad Are an Important Piece of History – Here’s Why Art Historians Teach Them,” The Conversation (blog), January 9, 2023, http://theconversation.com/islamic-paintings-of-the-prophet-muhammad-are-an-important-piece-of-history-heres-why-art-historians-teach-them-197277; Christiane Gruber, “An Academic Is Fired Over a Medieval Painting of the Prophet Muhammad,” New Lines Magazine (blog), December 22, 2022, https://newlinesmag.com/argument/academic-is-fired-over-a-medieval-painting-of-the-prophet-muhammad/.

2 I am referring here to the data in response to the NACCC surveys (National Assessment of Collegiate Campus Climates) conducted through the University of Southern California Race and Equity Center. My thanks to Dr. John Johnson for directing me to this information.

4 My thanks to Dr. Francesca Chubb-Confer for finding this piece and directing me to it. Audra Grigus, “Religio, Literae, Libertas,” The Oracle (blog), February 17, 2021, https://hamlineoracle.com/8430/news/religion-realigned/. 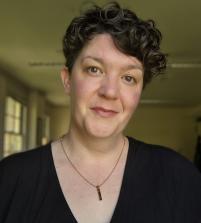 Lauren E. Osborne is Associate Professor of Religion and South Asian and Middle Eastern Studies at Whitman College in Walla Walla, Washington. She also serves as director of Whitman’s First Year Seminars. Her area of research is on the recited Qur’an and the intersections between discursive and non-discursive ways of knowing—specifically, via sound. She has a PhD in the Study of Religion from the University of Chicago Divinity School.