Encountering Marion: Notes from a Conversation with David Tracy

Next week's conference in honor of Jean-Luc Marion prompts reflection on the French scholar's career.

When the Marty Center hosts a conference in honor of Jean-Luc Marion next week, it will mark the end of the French scholar’s twenty-six-year tenure at the Divinity School. Since endings hearken back to beginnings, it seemed an opportune time to contact theologian David Tracy and ask him about his contacts with Jean-Luc Marion over the years. Tracy has been Marion’s closest colleague during the majority of his time at the Divinity School and they have remained close friends and kindred spirits since Tracy’s retirement.

Picking up the phone one Friday afternoon, I was curious to find out how David Tracy first met Jean-Luc Marion and what prompted him to invite Marion to join the faculty of the Divinity School. As so many others, Tracy first became acquainted with Marion through his work on Descartes, which made him one of France’s most reputable philosophers; as such it brought him to Loyola University Chicago in the early 1990s for a series of lectures on Descartes organized by philosopher Adriaan Peperzak. But Tracy and Marion also met at various European conferences on theology and phenomenology.

As Tracy puts it, both were outliers at these conferences: Tracy the theologian exhibited a strong philosophical interest, while Marion the philosopher exhibited a genuine theological bent. Tracy attributes his own interest in philosophy to his mentor Bernard Lonergan S.J., and credits his colleague’s theological bent to his informal training by Jean Daniélou S.J. and other theologians in the context of a Catholic student group. At the Sorbonne the later cardinal Lustiger served as a student chaplain who was influential on an entire generation of Catholic students including a young Jean-Luc Marion. Being thus exceptional conference attendees each in their own way, Tracy and Marion shared a concrete mission, namely that of acting as bridge builders between these divergent fields. When Paul Ricoeur retired from the Divinity School, Tracy proposed that Jean-Luc Marion would be a perfect successor; after all, Tracy had always appreciated the contribution of French intellectual culture to the school. And so it came to pass that Marion would not only walk the streets of the Quartier Latin in Paris but each spring also those of Hyde Park in Chicago. Both Ricoeur and Marion found their natural home in the Divinity School as professors of Philosophy of Religions.

Having occupied the Nuveen chair in Philosophy of Religions for a period of time, Marion eventually came to succeed Tracy as the holder of the Greeley chair in Catholic Studies upon the latter’s retirement; it is in this capacity that he has taught in Chicago for the past decade. I asked Tracy what he thought of that development, especially insofar as it marked a significant departure from Ricoeur’s trajectory. According to Tracy, Ricoeur liked theology but did not take to it, while Marion felt increasingly drawn to theology, seeing it as a natural extension of his own project in constructive thought. Accepting the Greeley chair would subsequently alter Marion’s profile from that of a Cartesian philosopher and phenomenologist to that of a major Catholic theologian. It seems fair to say that for young Catholic theologians in the United States Hans Urs von Balthasar and Marion are the two theologians who feature most prominently among recent dissertation topics, eclipsing even the role of Karl Rahner. Tracy considers Marion’s work for the Gifford lectures on Givenness and Revelation an indisputable high point, seeing it executed in what he calls both an original and a fruitful way. In those lectures Marion aims to recalibrate the relation between natural theology or metaphysics and revelation in a way that overcomes the objections of dogmatic theology and modern metaphysics alike and allows contemporary phenomenology to show us a new path towards the paradoxical reality of a revelation. That reality would include Christ as the icon of the invisible opening out into the manifestation of Trinity. As Tracy sees it, Marion succeeds in connecting Balthasar’s theology of revelation with Rahner’s emphasis on grace through his account of graced nature.

Of course, great minds have their differences and so do Tracy and Marion. For Tracy phenomenology has always been closely associated with hermeneutics. He explains his interest in the latter field by tracing it back again to Lonergan who instilled in him a strong sense of historical consciousness, for which Vatican II cleared the way in theology. In Tracy’s view Marion does consider hermeneutics but does not give it much sustained emphasis, drawn as he is to phenomenology, being more Husserlian than Heideggerian. Theologically Tracy and Marion also moved in different circles. Influenced by Lonergan as well as Rahner, Edward Schillebeeckx, and Hans Küng, Tracy has a longstanding association with the journal Concilium, which represents an inner Catholic ecumenical movement, while Jean-Luc Marion is associated with the more conservative journal Communio. One of its founders alongside Ratzinger and Balthasar was Henri de Lubac S.J., himself one of the greatest theologians of his period according to Tracy, and mentor of Jean Daniélou. Yet these differences have never been in the way of their friendship, let alone their mutual passion and esteem for the powerful project of theology. Reflecting this, the conference title The Contribution of Theology to Rationality, chosen by Marion with characteristic wit, is a rather adequate description of their joint work of bridge building in the current academy.

If his health permits, Tracy hopes to attend Marion’s farewell lecture on November 4 on “The Phenomenality of Revelation: The Paradoxical and the Parabolical.” When the Divinity School bade farewell to Marion last summer, he told those of us present that after twenty-six years he knows the streets of Hyde Park as well as those in Paris’s Quartier Latin. There is an important takeaway from his quip. For, what has made this all possible, Marion and Tracy would no doubt both agree, is that The University of Chicago has what the Sorbonne lacks: a Divinity School. 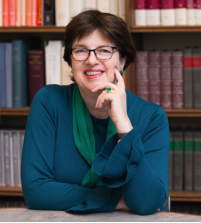 Willemien Otten is the Dorothy Grant Maclear Professor of Theology and the History of Christianity and Associate Faculty in the Department of History. She studies the history of Christianity and Christian thought with a focus on the medieval and the early Christian intellectual tradition – especially in the West – and an emphasis on the continuity of Platonic themes. Her latest book is Thinking Nature and the Nature of Thinking: From Eriugena to Emerson (Stanford, 2020). With Alireza Doostdar, Otten serves as faculty co-director of the Marty Center and with Ryan Coyne, she has organized next week’s conference in honor of Jean-Luc Marion.

See All Articles by Willemien Otten