The Broken Grace of Leonard Cohen

Editor's Note: The deaths of David Bowie, Prince, and Leonard Cohen; the awarding of the Nobel Prize to Bob Dylan; the public feud between then-President-elect Trump and the cast and creators of Hamilton; and other recent events have all served to underscore the significance of music in our public life

Editor's Note: The deaths of David Bowie, Prince, and Leonard Cohen; the awarding of the Nobel Prize to Bob Dylan; the public feud between then-President-elect Trump and the cast and creators of Hamilton; and other recent events have all served to underscore the significance of music in our public life. Today's issue is the first essay in a new series from Sightings, featuring contributions from a mix of scholars and performing artists, on the manifold ways in which popular music and religion intersect. 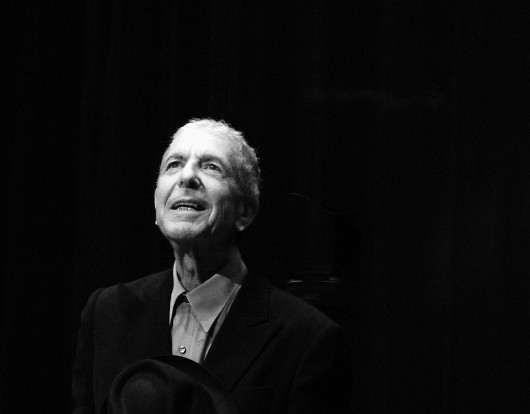 Among the numerous notable passings of 2016, the death of Leonard Cohen was especially poignant for many observers of religion and culture. Cohen’s iconic song “Hallelujah” was recently identified as a “secular hymn” in a Journal of Media and Religion article coauthored by three communications scholars at Brigham Young University: professors Steven R. Thomsen and Quint Randle and master’s student Matthew Lewis. “While nonreligious in nature or intent,” they write, “the secular hymn is a pop song that allows the listener to experience the numinous by creating an affective state that parallels a spiritual or religious state of mind.”

Cohen’s “Hallelujah” has been covered by numerous artists, is played at all sorts of memorials and remembrances, and has been used frequently in film and television. From The West Wing to Shrek to Saturday Night Live—where it was sung post-election by Kate McKinnon as Hillary Clinton—the tune is ubiquitous and used to evoke moods ranging from somber remembrance to resignation. In fact, many of Cohen's songs can be said to have the qualities of a “secular hymn” as defined by the study's authors. Yes, these songs are hymn-like, but are they truly “secular?” I would argue that even a cursory glance at the late songwriter’s life and work shows Cohen to occupy a space somewhere between the sacred and profane.

Cohen, who died on November 7th at the age of 82, once wrote to his publisher that he wished to reach “inner-directed adolescents, lovers in all degrees of anguish, disappointed Platonists, pornography-peepers, hair-handed monks and Popists.” At the time he was 25 years old, already long considered a prodigy. He would find some of those discontented seekers he mentioned as well as droves of other philosophically and spiritually inclined souls. A poet, author, and songwriter of massive import, Cohen touched the lives of many. His influence is vast and stretches across continents and generations.

Literature and music can often be interpreted as having religious modes, as well as themes and issues considered “theological,” but Cohen regularly tapped the well of religion with a seriousness of purpose that few popular artists before him or after could match. He engaged the divine throughout his career, at a time when the power of faith had arguably been diminished by the despair of Auschwitz, Hiroshima, and Vietnam. Cohen was raised in Judaism by parents who told him he was a direct descendent of the high priest Aaron. He was also an ordained Zen monk, an appreciator of Christianity and Gnosticism, and a reader of Hindu philosophy. Among his peers, Cohen’s religiosity made him somewhat of an anomaly. He exhibited a rare spiritual seeking that could not be reduced to mundane curiosity or fashionable affect, and he undertook this journey with the severity of a scholar, but went beyond pure theology.

Among his greatest feats was the constant placement of irony and cynicism (defining features of his cultural moment) in tension with a deep and abiding sense of awe. His poetic sense was profoundly Jewish, and therefore biblical. His work feels very old, but always, at the same time, very new. It is steeped in the lyricism of the Psalms as well as the folk revival of the 1960s, drawing as much from the Hebrew prophets as from Bob Dylan; in the process, he closed the distance between the two: a holy irreverence tempered by measured faith.

Another tension, that between the sensuous and the ascetic, was also a hallmark of Cohen’s career. His narrators often found themselves faced with women who were repositories of wisdom and mercy. Sex was spiritual incarnation, and there was salvation to be had in the flesh. But while a sensualist, Cohen was also wont to seek mortification as a Zen disciple. For six years he lived atop Mount Baldy with his roshi just outside Los Angeles, where he was said to keep a menorah in his cabin near the zendo. Once asked by an interviewer whether he was religious, Cohen simply replied: “I am religious in that I know the difference between grace and guilt.”

Cohen passed the day before the presidential election, and, for some, his departure came to symbolize their despair over that Tuesday’s results. A gentleman of depth and grace had exited at a time when his presence was most needed. Among religiously inclined commentators, this verse from his song “Anthem” also emerged in online remembrances:

Ring the bells that still can ring
Forget your perfect offering
There is a crack in everything
That's how the light gets in.

Offer what things you can, he seems to say. Keep hope alive. We are one in our broken nature.

To seekers of wisdom, students of literature, and observers of religion in culture, Leonard Cohen’s oeuvre still offers great fathoms waiting to be explored. Huge in both output and scope, we have only begun to crack its surface. Whether spiritual or worldly, his concerns were classic and timeless, universal in both their reach and aspiration. For those who discover it, his work may offer a respite from the bodied politics of religion, our second-rate discourses and polemics. Our brokenness.

On his last album, released a matter of weeks before his death, Cohen appeared to be preparing for the next stretch of his journey. In the title track “You Want It Darker,” he addressed God one last time in the languages of Jewish and Christian prayer he knew so well:

Magnified, sanctified be thy holy name
Vilified, crucified in the human frame
A million candles burning for the help that never came
You want it darker – Hineni, hineni, I’m ready, my Lord.

Ultimately, Cohen’s surrender was to the mystery of a void that contains some hope for enlightenment. A voice crying out in the wilderness, he managed to render the sacred profane and the profane sacred in a way we are unlikely to see again in this generation.

May we never grow too accustomed to a world without him.

- Thomsen, Steven R., et al. “Pop Music and the Search for the Numinous: Exploring the Emergence of the ‘Secular Hymn’ in Post-Modern Culture.” Journal of Media and Religion, Vol. 15., August 11, 2016.

See All Articles by Paul DeCamp