The Black Church and LGBTQ People: Lessons Learned from #dems2020

Interrogating the intersection of race, religion, and LGBTQ rights in the South Carolina Democratic primary

When Pete Buttigieg, an openly gay man, vied to become the Democratic presidential nominee earlier this year, he opened a national conversation about the relatively low levels of support for LGBTQ people and same-sex marriage by African Americans, especially among older members of the Black Church.* This conversation was backgrounded after Buttigieg dropped out of the race following the South Carolina primary, and further so when COVID-19 grabbed headlines, but it will no doubt resurface when Buttigieg takes up his political career again and other LGBTQ candidates run for office.

To recap: Buttigieg enjoyed early primary successes in the majority-white states of Iowa and New Hampshire. In Nevada, he fell to third place in part because black and brown caucus voters make up a larger share of this state’s electorate. His momentum ground to a halt in South Carolina where nearly 60 percent of those who cast ballots were African Americans. Based on exit polls, a mere 3 percent—compared to 16 percent of whites—chose Buttigieg over other candidates. He finished in fourth place with a combined total of 8 percent.

What lessons may be learned from South Carolina’s primary about the link between religion and African American attitudes toward LGBTQ people? In the Palmetto state, this demographic makes up nearly 30 percent of the population. Because 94 percent of African American South Carolinians consider religion either very important or somewhat important in their lives, the Black Church wields a great deal of influence there.

Religious denominations in the United States have guided African Americans since the launch of the black church freedom movement in the 1800s. While differences exist between denominations and congregations, most black churches, political scientist Allison Calhoun-Brown writes, share a religious culture and use “similar scriptural analogies [and] messages.” These churches, including in South Carolina, have a history of support for progressive social-justice issues but tend to show considerably less support for LGBTQ rights and same-sex marriage.

Of note: support is higher among younger African Americans. Civil rights activist and South Carolina’s longtime U.S. congressman Jim Clyburn told CNN there was “no question” that older black voters would find Buttigieg’s sexual orientation and views on same-sex marriage an obstacle. He also said this was “a generational issue ... it’s an issue not the way it used to be. My own grandson is very much for [Buttigieg].”

With respect to the role of the Black Church, sociologist Darren E. Sherkat and his research colleagues used data from General Social Surveys to assess whether religion and race influence support for same-sex marriage. They found that “religious denominations play a strong role in structuring attitudes about the morality of homosexuality, and support for specific policies of toleration and nondiscrimination.” They also concluded that “African Americans are significantly more likely to view homosexuality as wrong, in keeping with their conservative Protestant origins and high rates of religious participation.”

Pew’s data shows an undercurrent of hostility toward same-sex relations even among secular African Americans. However, for African Americans, it is difficult to say where the reach of the Black Church starts and ends. Sherkat’s study demonstrates that, in this demographic, secular and sacred cosmologies are often intertwined. Though Sherkat mentions African American writers from the 1960s and 1970s who claimed that homosexuality was primarily a white phenomenon and therefore antithetical to black identity, it is possible that religion-driven antipathy influenced these writers’ views.

South Carolina is, in many ways, a conservative state in the sense that it favors traditional family and social norms. During an interview with one of this article’s authors, Echol Nix Jr., a religion professor at South Carolina’s Claflin University, said, “I think that conservatism is there because we’re still largely in the Bible belt ... With that said, those traditional views [about LGBTQ people] are ingrained and so they touch down on people’s views of what the Bible says. And I think that is the source for a lot of people’s views. It’s changing in a number of ways with the younger generation but even there the tradition is strong. I think people would prefer a candidate who is married, a male candidate who is married to a woman.”

A significant number of African Americans place the Bible at the center of their lives. This is the case not just in South Carolina but throughout the United States. Pew Research data from a 2014 Religious Landscape Study shows that African Americans are “more likely than most other Americans to read scripture regularly and to view it as the word of God.” More than half (54 percent) read the Bible or other holy scripture at least once a week outside of religious services. In contrast, only 38 percent of “Hispanics” and 32 percent of “whites” say the same. For those who accord the Bible ultimate authority—key passages, when read literally—can be understood to indicate God’s disapproval of homosexuality. According to 2014 Pew Research data, seven in ten African Americans consider homosexuality a sin.

This disapproval is reinforced by African American clergy. A February 2020 LifeWay Research poll shows that most black pastors hold a negative view of same-sex marriage. Only one in eight agree with the statement “I see nothing wrong with two people of the same gender getting married.” This could mean that, in the Black Church, people in the pews support same-sex marriage at significantly higher rates (44 percent) than their clergy (15 percent).

Pastors and literal readings of the Bible are key influences in shaping the views of African Americans toward LGBTQ rights and same-sex marriage. Education also plays a role. In their study, Sherkat and fellow researchers found that educational attainment “is among the most powerful predictors of support for [LGBTQ] rights.”

Rates of educational attainment among younger African Americans are rising, and so, too, support for these rights. In 1992, the U.S. Bureau of Labor Statistics reported that 42 percent of African Americans in the labor force who were age 25 or older had either taken some college courses or had earned an associate’s degree or a bachelor’s degree or higher. By 2018, 63 percent fit this description. Higher educational attainment often leads to higher exposure to people from a variety of backgrounds and perspectives. A well-documented effect of higher exposure to LGBTQ people is a lower level of disapproval. Studies also show that people who have had some college or are college graduates are less likely to read the Bible literally. 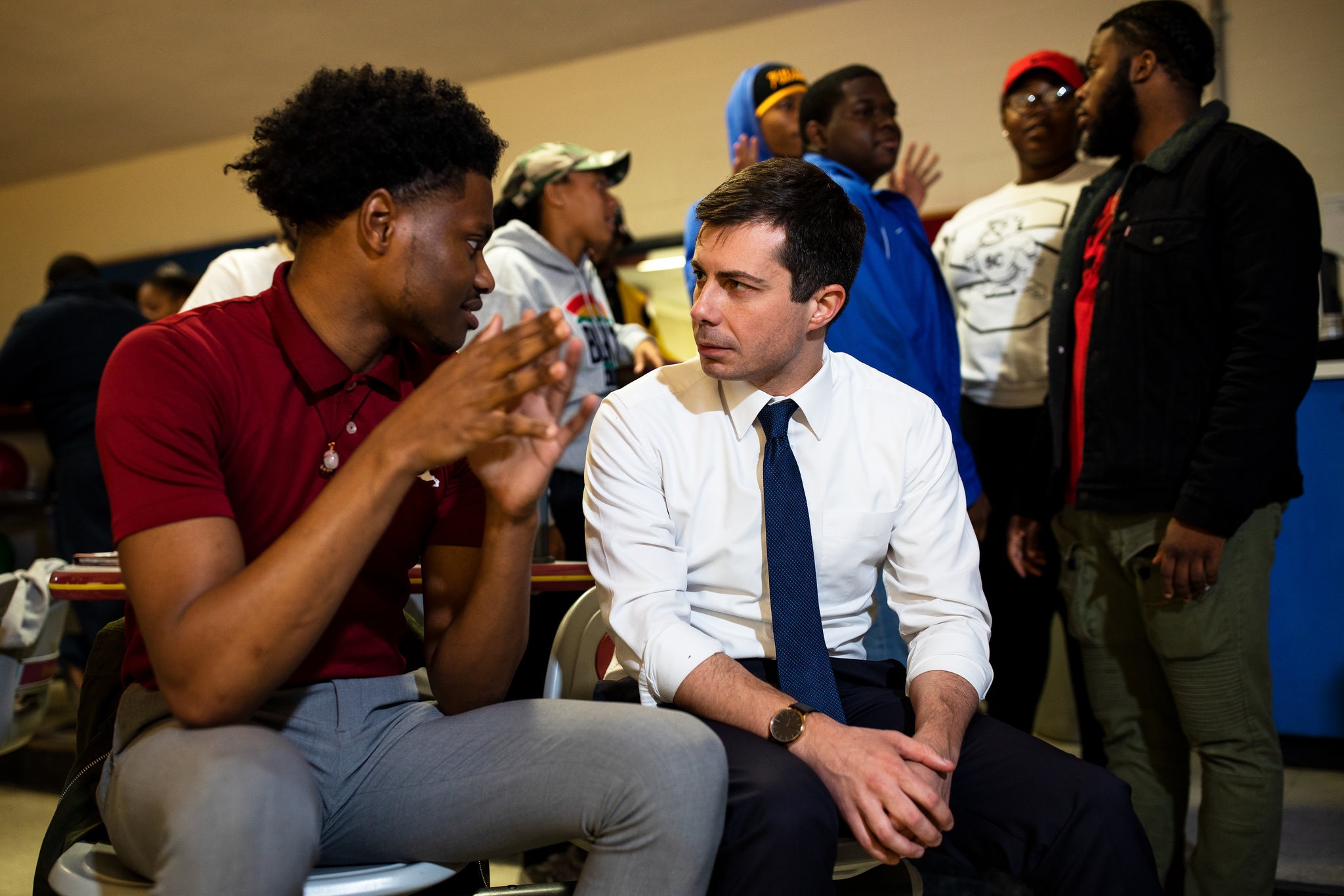 Pew data shows that, overall, support for same-sex marriage among African American Protestants has increased in recent years; it jumped 20 percentage points in the decade between 2007 and 2017 (from 24 to 44 percent). Pew Research Center attributes part of this uptick to young African Americans who tend to be friendlier to LGBTQ people and same-sex marriage than their elders.

When Nix was asked, before South Carolina’s primary, where Pete Buttigieg might make inroads among African American voters, he said, “I would think that the college community would be a good place,” and he listed the state’s HBCUs (historically black colleges and universities). Over time, Nix added, “college students could very well influence their parents or their grandparents and maybe have their parents and grandparents think more deeply about [Buttigieg’s] campaign.” If and when younger African Americans assume a larger role in congregational life, black churches could well become more supportive of Buttigieg and other LGBTQ politicians.

*The phrase “Black Church” is employed as a shorthand reference for African American Protestant Christianity, a descriptor which the authors recognize is at once useful because of its popular currency and yet insufficient in terms of capturing the diversity of African American religious life.

Author, Lerone Jonathan Wilder (PhD, Union Institute & University), is Pastor of the historic Mattoon Presbyterian Church (USA), a predominantly African American congregation in Greenville, SC. He is Affiliate Faculty of World Religions and Leadership and Spirituality at Union Institute & University in Cincinnati, OH, and Adjunct Faculty of African American Studies at the University of South Carolina Upstate in Spartanburg, SC.

Author, Myriam Renaud (PhD’18), is a former editor of Sightings. She has written about religion for The Atlantic, The Conversation, Religion & Politics, The Globe Post, and more. She is co-editor, with William Schweiker, of the forthcoming academic book Multi-Religious Perspectives on a Global Ethic: Toward A Common Morality (Routledge).