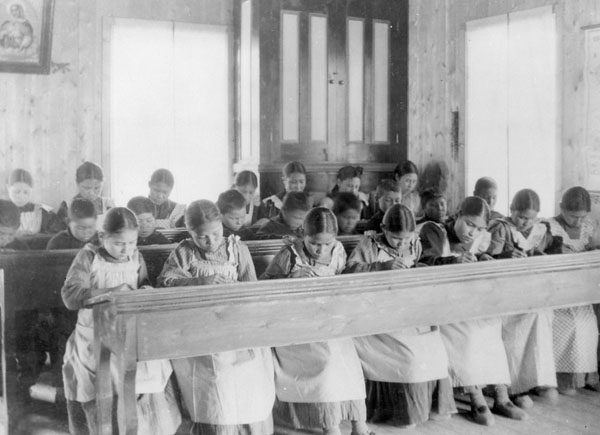 One would expect a headline beginning “A Pope Given to Apologies…” to be followed by a journalistic story which is likely to quicken the interest of readers. Pope Francis has made many headlines over stories which focus on the recipients of such apologies. He has apologized to people wounded by the Catholic Church in a variety of countries on various continents, whenever the church has been a conspicuously errant body, and to victims of general injustice. But had I finished typing the headline from the New York Times last Tuesday (April 24), I envision that we would have lost the interest of many potential readers. Why?

Let’s finish the line: the Pope “…Has Nothing for Indigenous Canada.” I do not want to suggest that citizens of the nation just south of the Canadian border do not care about Canada, or that non-Indigenous people would heartlessly ignore the Indigenous anew. The case is simpler than that: most of us here in the U.S. do not track many kinds of Canadian stories, though the plight of the Indigenous there or anywhere demands and deserves regular attention. Therefore, whatever measure of interest readers have on this subject, I hope they will be quickened to pick up on what the Times reported, as did many Catholic papers.

To the point (we won’t publish detailed statistics to enhance it; please trust us and all who report on this): the rate of suicides among the Indigenous population in Canada is alarming, and we “natives” of cities distant from Ottawa, the source of the headlined story, have a responsibility to take notice, even if we are not close to Native people. It would be possible to turn this column and others like it into an essay which, one hopes, might inspire reflection and change. We know that readers and citizens at large are being called to repent—does that word have a place in commentary on the news?—and revisit bad old stories, then compete with each other as mopers. If we know that, why pile on with another case history?

At this point I’ll draw once more on the words of a philosopher who is no stranger to this column, Max Scheler, genius writer on repentance as “change of heart.” Scheler begins by reminding us that the past is past, gone, irretrievable. Dwelling on what the forefathers of Canadian Catholics did through centuries of colonization and forced schooling may inform us, but by itself changes little. Second, bringing the case close to home, dwelling on what “I” or “we” have done to Native people is not all that creative. Scheler says what is needed is a “change of heart” in anyone who moans, not “Alas! What did I do?”—though that is a partially creative next step. No, Scheler goes further, into full creativity territory, suggesting one ask, “Alas! What kind of person am I that I am capable of doing that bad thing?” and make efforts to change from there on.

Writers and preachers and confessors in biblical traditions (though not these alone), risk all on getting us to ask and answer that final question, individually and collectively—in terms of nation, race, church, cultural context. Pope Francis has been strongly attacked of late for not responding to urgings that he apologize for what his church had done to Indigenous people. He knows how horrible that was, as well over a hundred thousand children were sorely wounded, many of them killed, by their experience in cruel residential schools with their abusive practices. But his career-long effort shows him to be acting and speaking so as to help bring about a “change of heart” in person and society, in new ways in new days. And the spirits of those Native Canadian victims, if they could be embodied, might find reason to leap and clap and dance. They would not have time to mope.

- Austen, Ian, and Jason Horowitz. “A Pope Given to Apologies Has Nothing for Indigenous Canada.” The New York Times. April 24, 2018.