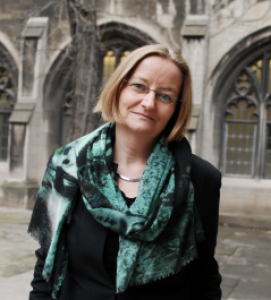 Religion and the Human Sciences

Prof. Krause is the co-organizer of Portraiture in Visual and Literary Culture (Ancient to Medieval), amultiday conference bringing together scholars from around the world and around the campus, including the Divinity School, Art History, and Classics.

Karin Krause is an art historian who specializes in the Christian visual culture of Byzantium and the pre-modern Mediterranean.

In her teaching at the Divinity School, Professor Krause seeks to broaden the concept of religion by drawing attention to the significance of material artifacts alongside texts and theories. She welcomes projects that explore the role of visual culture in religion and helps students develop the skills to address material artifacts as primary evidence.

Her first book, The Illustrated Homilies of John Chrysostom in Byzantium, published in German, won an award from the Southeast Europe Association (Südosteuropa- Gesellschaft). Making available, often for the first time, the illuminated manuscripts that contain the teachings of Byzantium’s preeminent theologian, it reconstructs the circumstances of their production and their relevance for the liturgy. Krause is currently completing a second book with the working title Images of Inspiration: Art, Authenticity, and the Sacred in Byzantium. It explores claims about the divine origin of sacred texts and artifacts, claims that are manifest in both theological writings and visual images. Analyzing how their underlying notions of authenticity were adapted from Greco-Roman and Jewish antiquity, the study also shows how Byzantine thinkers reinterpreted ancient epistemic theories of truth in order to promulgate claims of religious orthodoxy and authority. Krause’s third monograph, tentatively titled Propaganda, Cult, Scholarship: The Response to Byzantine Artifacts in Venice is far advanced, and builds on her previous publications on the impact of Byzantine culture on medieval and early modern Italy. Karin Krause’s research has been supported by the German Research Community (DFG), the Max Planck Society, Dumbarton Oaks, the Gerda Henkel Foundation, the German Academic Exchange Service (DAAD), and others. She is currently an affiliated scholar in the research cluster “Mobility, Microstructures and Personal Agency in Byzantium” (Austrian National Research Foundation, FWF), based at the University of Vienna.