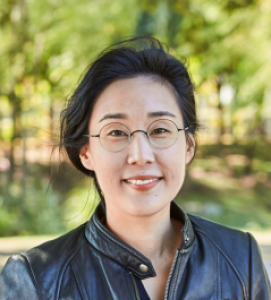 Faculty Assistant Professor of the Anthropology and Sociology of Religion; also in the College

Angie Heo is an anthropologist of religion with specialties in media, economy, and politics. Her first book, The Political Lives of Saints: Christian-Muslim Mediation in Egypt (University of California Press, 2018), examines how Coptic Orthodoxy mediates social relations between Christians and Muslims in Egypt. It analyzes how material and visual cultures of saint veneration shape church-state authoritarianism, majority-minority relations, and sectarian violence. Her next book turns to the study of Protestantism and anti-communism in the Korean Peninsula. At the broadest level, it traces the Cold War’s deep and ongoing influence on the ideological and capitalist contours of Christianity in the divided Koreas. Drawing from her research in Egypt and Korea, Heo has collaborated with anthropologists, historians, and theologians interested in religion in Central and Eastern Europe and East Asia. These collaborations have resulted in two publications, Praying with the Senses (2018, edited by Luehrmann) and Religion and Borders in (Post-) Cold War Peripheries (2019, co-edited by Heo and Kormina).

Heo’s teaching at the Divinity School focuses on social scientific approaches to the study of religion. Her courses explore ethnographic methods and anthropological modes of inquiry and analysis. What are the social, cultural, and political elements of religious thought and practice? How do the social sciences influence conceptual work in the study of religion across geographic and historical contexts? Heo welcomes students interested in Christianity, especially in colonial and postcolonial settings throughout Asia, Africa, and the Middle East. She is committed to advancing the critical and comparative study of religious differences (e.g., interfaith, sectarianism, pluralism, secularism) and understanding the global and transnational dimensions of religious traditions and movements (e.g., diaspora, migration, capitalism, empire).

Heo’s surname is pronounced like “hull” without the “ll.”

OFFICE HOURS: To sign up for Professor Heo’s office hours, go to https://www.wejoinin.com/heo@uchicago.edu