Was It Kavanaugh’s Guilty Conscience, or His Karma?

Surely, for those who are aware that Brett Kavanaugh was a key architect—one of the main authors—of the Starr Report, the following was one of the richest moments in this recent spectacle of hypocrisies: “This is a circus 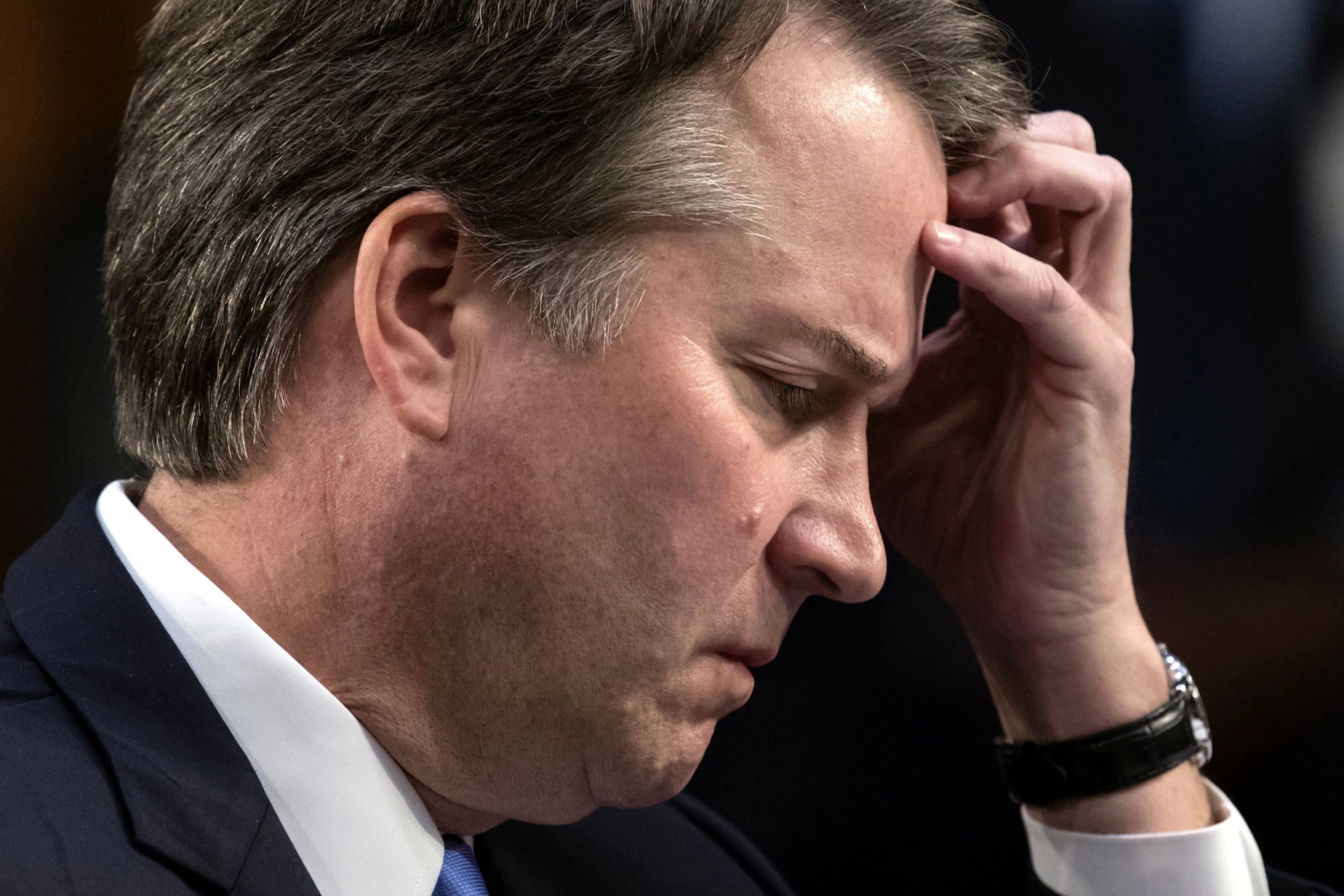 Surely, for those who are aware that Brett Kavanaugh was a key architect—one of the main authors—of the Starr Report, the following was one of the richest moments in this recent spectacle of hypocrisies:

And as we all know, in the United States political system of the early 2000s, what goes around comes around. I am an optimistic guy. I always try to be on the sunrise side of the mountain, to be optimistic about the day that is coming.

But today, I have to say that I fear for the future.”

Brett Kavanaugh belongs on the short list of those responsible for the “political system of the early 2000s.” He gets special credit for the unbridled, detailed airing of allegations of sexual impropriety against men who used to be protected from this kind of thing. He is an inadvertent #MeToo precursor.

If we were reading this as a piece of dramatic fiction, it would be simplistic in its irony. Kavanaugh himself is reaping the karmic reward of his previous actions and telling us about it from a perspective of clarity: “what goes around comes around.” He means it as a threat, but I prefer to read these words as an admission of what should have been in his mind during his Starr Report days in 1998. Now that he knows their truth, it is too late. He claims to fear for the future, but really the future he should have feared then has become the present, which he himself helped to bring about.

The Starr Report must be what Kavanaugh has in mind when he claims that he is subject to “revenge on behalf of the Clintons.” It would be odd in the extreme to imagine that current Democratic politics is still guided by the defeated [Hillary] Clinton; if that’s what he means, this reference to “the Clintons” sounds like cockeyed conspiracy theory. Yet there is a certain epic logic to the idea that the Kavanaugh sexual misconduct hearing is a counterpunch to the Starr Report. It is a political operative’s paranoid imagination of a ruthless [Bill] Clinton, serving cold revenge twenty years after the fact.

Of course, to view the present event as literally the Clintons’ revenge, you have to discount the agency of Kavanaugh’s accuser, Christine Blasey Ford. You also have to discount the #MeToo movement as a genuine force, motivating women like Dr. Ford to come forward with stories of sexual assault, when previously they had remained silent. But even if you do imagine that the Clintons are working in the dark behind the scenes, how could they have orchestrated such a perfect revenge attack on Kavanaugh’s public and private life? They didn’t choose him to be Trump’s number one candidate for the Supreme Court. How could it have happened this way, so poetically, if it wasn’t a conspiracy? How did what went around, come around?

Here I think Buddhist karma theory can provide us some insight, since, if we look, these events display the workings of karma—understood psychologically and socially. Let us assume, for the sake of argument, that Dr. Ford is not only a “credible” witness, as everyone seems to agree, but also a reliable one. Let’s add to her testimony the general character picture of Kavanaugh as often drunk and belligerent during high school, college, and law school; this only requires us to take seriously many classmates who have come forward to counter his depiction of himself as never letting his drinking get the better him, and certainly never blacking out.

Buddhist karma theory would understand that the actions of such a person have their results not only in the world—he damages other people and property—but also, crucially, within his own mental continuum. Whether or not he feels badly about his negative behavior, it takes a toll and shapes his personality. Modern psychology talks about the “projection” of one’s repressed self-image onto others; a similar phenomenon is what Buddhists describe as constructing “worlds” of experience to reflect our subconscious self-image. One surrounds oneself with similar sorts of people (Buddhists would say living beings), where one finds affinity. Psychologists point out that adolescent peer culture is a powerful socializing force, shaping behavior and identity beyond the family. Kavanaugh’s toxic male peer group reemerges in the form of his Republican defenders, egging him on to engage in a defiant denial of any personal imperfections. Kavanaugh’s chance at changing his karma—by acknowledging culpability and attempting to change and grow through facing guilt and shame—would be made nearly impossible by the jeers of his male peer groups, past and present. (I am indebted to Lee Rosen for this psychological perspective.)

Flash forward to the Starr Report. One might think that someone with a drinking problem and a repressed history as a sexual abuser would shy away from spotlighting sexual misconduct, but affinity breeds useful cultural expertise. The innovative torturer makes real his own worst fears, and it stands to reason that the authors of the Starr Report were doing the same. I remember people asking during that time, Who could have written such a thing? Even if it is somehow cynically beneficial to the Republicans, we thought, the contempt for the privacy and dignity of, at least, Monica Lewinsky was over the top. This narcissistic character was in evidence at the Senate hearing.

If Kavanaugh’s characterological karma propelled him to the Starr Report, then how did it come back to him in his own Senate hearing? Here we need to raise our karmic causal thinking to the level of society. Kavanaugh himself pursued power relentlessly, and from his own side he surely did everything he could to be put in a position where his sexual history would be tested and investigated by the FBI and the media. He certainly made enemies. This is consistent with a guilty conscience subconsciously seeking punishment for his role in the Starr Report, and Bob Woodward's book Shadow suggests Kavanaugh had indeed had serious misgivings (though ineffective and not publicly acknowledged). But the theatrics of this generational comeuppance still seems incredibly unlikely. Why did Trump have to pick this guy, and why after the #MeToo movement?

Well, nothing is determined (I don’t think), but social forces do seem to have been at work: specifically, historical tides of feminism and misogyny. After reading Kate Manne’s Down Girl: The Logic of Misogyny, I am using the term “misogyny” to refer to “the ‘law enforcement’ branch of a patriarchal order, which has the overall function of policing and enforcing its governing norms and expectations.”

Under such a definition, Trump could be seen as the misogyny president, to the extent that he was elected (1) in order to prevent a woman from reaching a position of power over (all) men, and (2) to overturn the defense of women’s right to abortion established in Roe v. Wade. (Manne cites Linda Greenhouse and Reva B. Siegel to show that the modern anti-abortion movement is fundamentally misogynistic.) Trump’s presidency in the abstract, and in many particulars, is a backlash against feminist advances of previous decades. (Trump is partially a karmic product, a causal result, of Roe v. Wade; it is as if a social or political “pendulum” swings back particularly hard after it’s been pushed too quickly in one direction or the other.)

Trump, then, as the misogyny president, elected specifically to overturn Roe v. Wade and counter the dignity of women (the only thing absolutely clear about his candidacy), finds cultural affinity with other men with similar goals, similar repressions. He might have picked someone else, but it’s not surprising that he loves Kavanaugh. What appeared as coincidence or irony, then, has a karmic logic: The same misogynistic tendencies that made Kavanaugh such an expert public servant for the Republicans under Starr were crucial to his relevant beliefs as a judge and his appeal to the president. And he might have slipped by, too, were it not for the backlash against the backlash, the “resistance” and the #MeToo movement, which emboldened women like Dr. Ford to come forward to challenge powerful men—challenging them in public on their sexual improprieties, a path blazed most brazenly of all by the Starr Report. Karma provides a satisfying causal narrative, then, that links together the drinking, the sexual assault, the Starr Report, the Trump election, and the hearing; it is not exactly ironic, and it is certainly not revenge. The recommended emotional response is sadness, yielding to compassion.

I used to think that Greek tragedies were symbolic, expressing deep messages about the nature of the human heart. Now, I am starting to think that fate acting in history—better described as the flow of karmic forces, but similarly dramatic—is hardly metaphoric. It is simply a clear and direct explanation of the kinds of things that happen, socially. Maybe the Greeks and the Indians had perceived something I have only recently come to see. But, maybe, something has changed. I think we are seeing karma operate more clearly now than ever before, because culture is moving so quickly and in plain view, due to media, especially social media. I hope we can pay attention and learn to discern its patterns. If we do, we just might be able to right this ship—and maybe, eventually, sail it forward. It could happen. I, too, am an optimistic guy.