President Donald Trump had a historic day on August 21, 2019

President Donald Trump had a historic day on August 21, 2019. In less than twenty-four hours, he was declared “like the King of Israel” by conservative commentator (and Jewish convert to Christianity) Wayne Allen Root, and declared himself, in an entirely different context having to do with Chinese trade negotiations, the “Chosen One.”

For millions of Americans, Trump’s whirlwind of tweeting and speaking—indeed, his entire presidency— fits within a religious framework that accommodates these utterances. Susan Harding and Sean Durbin, among other scholars, have described the important function of biblical narrative patterns as blueprints for conservative Protestants in perceiving politics and calling for action. Trump has been hailed by his most vocal evangelical supporters as a “King Cyrus” leader—a person who exhibits little godliness but has been chosen by God to do great things. Such leaders are not only hoped for but are prophesied by the Bible. They may even play leading roles in the end of days, either fighting the rising tides of evil or, as Mr. Root believes, in divinely protecting what he perceives as God’s chosen people.

Talk of anointed leaders and machinations in the Middle East might be expected from evangelicals, but what about the broader cultural discourses these days that seem to anticipate a coming apocalypse? Projections on the effects of climate change, as well as the burning of the Amazon rainforest and the destruction of the Great Barrier Reef, have reached an apocalyptic tenor. The “end of the Anthropocene” is being prophesied about today as frequently as the end of days was in previous eras of religious history.

These apocalyptic valences in contemporary American culture are indebted to many influences. Rapid advances in technology, social dislocation and status anxieties, roiling geopolitical developments—these all contribute to our anxious age. Of course, ours is not the first Age of Anxiety—nor was W.H. Auden’s, though the poem he wrote in 1947 inaugurated this diagnosis. Nor will ours be, optimistically, the last anxious age. And yet, the categories and intellectual tendencies of these concerns are not, like periods of chaos and calm, cyclical. They are linear, rooted in history and historical change. The motifs, themes, metaphors, and narratives that shape our shared apocalyptic language have more in common than many of us realize. The influence of evangelical apocalyptic thought, in short, is not consigned to evangelicalism.

Most Americans—the vast majority of whom do not subscribe to any formal "end times" scenario and certainly not the Christian one that includes a rapture, an antichrist, and a Battle of Armageddon—find it hard to appreciate just how deeply this one view of the end has permeated our shared culture. Its formal name—premillennial dispensationalism—is hard to say five times fast and is even harder to exhaust as a source for American discourse. It is like communism, or Puritanism, or Mormonism—an identifiable tradition but one that has been invoked, denounced, marketed, and repackaged so many times, by so many people, that any attempt to grasp its essence is futile. Its origins date to the 1830s, to the writings of a disaffected Anglo-Irish cleric named John Nelson Darby (1800-1882), who would go on to help found the Plymouth Brethren movement. Darby’s teachings found a permanent home in North America, a continent he only visited for the first time at age 62. He offered a novel Christian reading of the Bible that posited God working toward world redemption with two groups: the Jewish people and the gentile church. The implications he drew from his reading of the Bible included a secret and sudden rapture of all true Christians, a future for the Jewish people in the land of Palestine, and the rise of not one but two temporal, political antichrists (one Gentile and one Jewish). After the Civil War, some Americans adopted parts of Darby’s teachings, though always in service of their own ends. Since then his ideas have become a driving force shaping the unique character of American evangelicalism.

Dispensational motifs may already be familiar to the tens of millions of Americans who grew up in conservative Protestant homes. While much of the dispensational world has been white, evangelical, and politically conservative, various components of dispensationalism have been adopted by African Americans, Pentecostals, and smaller Christian groups like the Seventh Day Adventists. Through a bestselling study bible—the Scofield Reference Bible, first published in 1909—dispensationalism has continued to lodge itself deep in the hearts and minds of Christians. Successful cultural productions have diffused dispensational themes throughout American culture. Hal Lindsey’s Late Great Planet Earth, published in 1970 and selling more than 35 million copies since, packaged dispensational theology in hip veneer for the baby boomer generation. And the Left Behind novels (followed by films), selling more than 80 million copies since the first book was published in 1995, have put the despotic reign of Nicolae Carpathia (the Eastern European antichrist) in the same pantheon of antagonists as President Coriolanus Snow (Hunger Games) or the Republic of Gilead (Handmaid’s Tale).

Diagnosing the influence of evangelical apocalypticism on American culture can quickly take on a life of its own. Too often apocalypticism is conflated with evangelicalism, and evangelicalism with all Christians. This leads to an uncritical appraisal of both the function of apocalyptic rhetoric within Christianity or an uncritical embrace of apocalyptic language in service of other pressing calls for action. The motifs of popular culture, inherited from the prominent historical influence of Protestantism, have given Americans a set of rhetorical and argumentative tools with historically-conditioned efficacy. Prophecy’s usefulness in apocalyptic evangelicalism has been to prompt an inner crisis of the soul and recognition of the awesome power of God; to orient the individual to look eagerly for that “blessed hope” of Christ’s return. This may not be what the Hebrew prophets intended, or what the jeremiads of the Puritans sought to evoke, but since the rise of dispensationalism, these functions have played an outsized role in the American apocalyptic landscape, both inside and outside conservative Protestantism.

The allure of thinking and speaking apocalyptically about the earth, the environment, and humanity will not abate anytime soon. The media responses to President Trump’s recent tweets, a mix of alarm and bemusement, make that clear. But to uncritically adopt the rhetorical and argumentative tools of apocalypticism—a deeply religious term and a historically-conditioned style of thinking—risks conflating the historical sources of anxiety with disasters of an imagined future. The potential individual psychological—not to mention the social—benefits of decoupling the language of apocalypticism with projections of the future are worth pursuing.

Image: In the 1920s, Clarence Larkin produced theological charts that shaped the apocalyptic visions of an early generation of Christian fundamentalists. 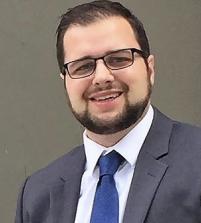 Author, Daniel G. Hummel, works at Upper House, a Christian study center on the campus of the University of Wisconsin-Madison. He is the author of Covenant Brothers: Evangelicals, Jews, and U.S.-Israeli Relations (University of Pennsylvania Press, 2019).