Springsteen’s Promised Land (It’s Not What You Think)

Bruce Springsteen, a self-professed “lapsed” Roman Catholic&nbsp;whose spirituality draws heavily upon his upbringing, has crafted a career-long message: we, as individuals and as a nation, can transcend trauma.&nbsp; Netflix gave us an enormous gift recently by releasing “Springsteen on Broadway.” It’s essentially a one-man show, joined for two songs by singer Patty Scialfa, the artist’s wife 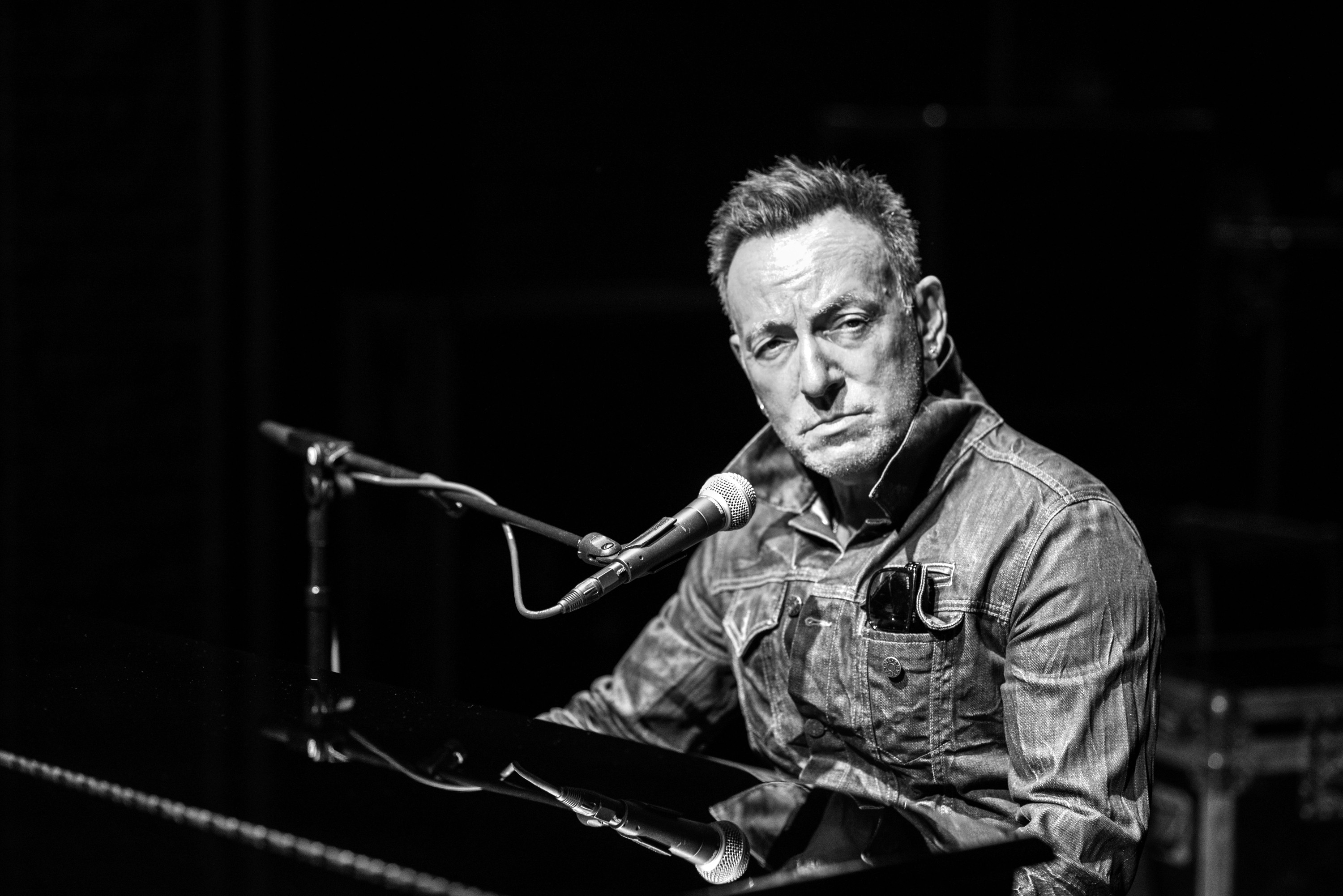 Bruce Springsteen, a self-professed “lapsed” Roman Catholic whose spirituality draws heavily upon his upbringing, has crafted a career-long message: we, as individuals and as a nation, can transcend trauma.

Netflix gave us an enormous gift recently by releasing “Springsteen on Broadway.” It’s essentially a one-man show, joined for two songs by singer Patty Scialfa, the artist’s wife. In rich emotional detail, Springsteen delivers the story of his life journey. Over his fifty-one-year career, Springsteen has honed a powerful unifying message: America repeatedly betrays its ideals only to find, each time, a way to turn back to its foundational values.

Springsteen begins by telling us that rock stardom requires “a furious fire in your belly that don’t quit burning.” His fire, he makes clear, is fueled by four factors: emotional isolation as a youth in a small New Jersey town; his reactions—initially negative and now positive—to his Catholic schooling; his father’s emotional absence; and his deep dismay at the dark underside of America’s history.

Springsteen burst into the national consciousness in 1975 by accomplishing the pre-internet equivalent of a viral post, occupying, in the same week, the covers of both Time and Newsweek magazines. The release of Born to Run, his third album, triggered this tidal wave.

The opening song of Born to Run, “Thunder Road,” is Springsteen’s invitation to get onto the highway to the great beyond; the title track, “Born to Run,” revs the engine to a deafening roar. “The Boss” is at the wheel, and we’re heading straight toward the "promised land" he envisions.

Now, forty-three years later, he wryly offers a different perspective. Lifting lyrics directly from Born to Run, he playfully deadpans about his hometown: “It’s a death trap. It’s a suicide rap.” Then, self-mockingly reviewing his claim-to-fame identity, he booms, “I'm Mr. Born to Run. I'm Mr. Thunder F-ing Road. I was born to run, not to stay. I am gonna run, run, run, and I’m never coming back. [Pause] I currently live ten minutes from my hometown.”

A spoken passage leads into “My Hometown,” with rolling phrases about church, family, weddings, and funerals, and a sharing of the sights, sounds, and flavor of Freehold, New Jersey. The emotions bubble up to the ebb-and-flow rhythm of life. His hometown, he now offers in a warts-and-all paean, is “a place where people made lives, where they did their very best, the best that they could to hold off the demons, outside and inside.”

Springsteen summons spirits throughout the show, most frequently that of his father. We feel the gaping wounds the young man received as he fought desperately for a connection with his now-deceased dad. Demons took their toll on the artist’s father; alcohol and depression drew life from him. “For years he sat at the kitchen table, unreachable,” Springsteen says quietly.

Much has been written about this family dynamic and the inner conflicts that arise from it. Springsteen says it succinctly: “My father was my hero, and my greatest foe.”

And yet, as Springsteen is about to become a father himself, a magical moment of transcendence takes place. His father, after a 500-mile drive, shows up unexpectedly. He has a message for his son: “You’ve been very good to us. And I wasn’t very good to you.”

The artist conveys his astonishment at what had happened: his father, in full apology mode, journeyed far to declare the heretofore unacknowledged. With this transformative act, healing occurs. The father’s ownership of emotional absence not only frees the son from lingering fury, but also releases the not-yet-born from the curse of multigenerational trauma.

Using softly-spoken words, Springsteen recalls how two lives—that of a bandmate and his bandleader role model—were extinguished in a purposeless war, pursued by our leaders long after they knew its future outcome. Born in the USA summarizes that war tersely: “They put a rifle in my hand; sent me off to a foreign land, to go and kill the yellow man.”

The choruses of Born in the USA, we learn, are to inspire us to reclaim our birthplace, “and the right to all the blood, and the confusion, and the pride, and the shame, and grace, that comes with birthplace.” We can heal, he says, from wounds that have been inflicted, but only after the full history and the raw emotions are sucked in and owned as part of our legacy.

In response to 9/11, Springsteen wrote The Rising. It voices the dream of a rescue worker who can see nothing except ash-filled darkness and death. Working frantically and at risk to his own life, the worker has visions of the sky that he can’t see, visions filled with bright light and intense memories. Hope remains, undeterred by the horrific.

Summoning another spirit through song, Springsteen seamlessly ties the present to the Depression Era past with The Ghost of Tom Joad:

Welcome to the new world order
Families sleeping in the cars in the southwest
No home, no job, no peace, no rest.

Then fast forward to March of 2018. Five months into the run of the Broadway show, seventeen students were murdered at Marjory Stoneman Douglas High School in Parkland, Florida. Springsteen responded by adding this tribute to the show, praising those who took part in the March for Our Lives:

We saw all those young people in Washington and citizens all around the country remind us of what faith in America and what real faith in American democracy [is], and how sacred that is. We’ve also seen folks … in the highest offices of our land who want to speak to our darkest angels, who want to call up the ugliest and the most divisive ghosts of America’s past. … What we’re seeing now is just another hard chapter, in the long, long ongoing battle for the soul of the nation.

Springsteen then delivers a stunning passage. Having merged the Springsteen family story with national traumas, he offers a spiritual pathway for freeing our children from the grip of demons. Staring hard into the camera, motionless, and in words sounding as if he is channeling them from one who lived in this land long before the first Europeans arrived, Springsteen utters these words:

We are ghosts or we are ancestors in our children's lives.
We either lay our mistakes, our burdens upon them,
and we haunt them,
Or we assist them in laying those old burdens down,
and we free them from the chain of our own flawed behavior.
And as ancestors, we walk alongside of them,
and we assist them
in finding their own way, and some transcendence.

We gain transcendence through an emotional return to the "Promised Land," which consists of the family, the place, and the country into which we are born. All are filled with demons, yes, but also with love.

He then calls on us to choose to “move forward in the land of hopes and dreams.” Taking his lead from his “mighty mom,” who bequeathed riches in the form of optimism, boundless energy, and unconditional love, he breaks into the Hail-Mary-Pass hopefulness of Dancing in the Dark.

“Springsteen on Broadway” is labeled by the artist as “my long and noisy prayer.” It asks for us to be redeemed, and for America to climb back up from its tragic fall. We must name our failings and fully accept their depth within us. We can then reclaim our birthplace and our most deeply-rooted values.

We can return to our roots. We can transcend evil by holding each other and telling truths. If we do that, we can arise together from our turbulent, fitful sleep. This is the way, Springsteen powerfully declares, for America to awaken from the ongoing national nightmare.

See All Articles by Ron Malzer