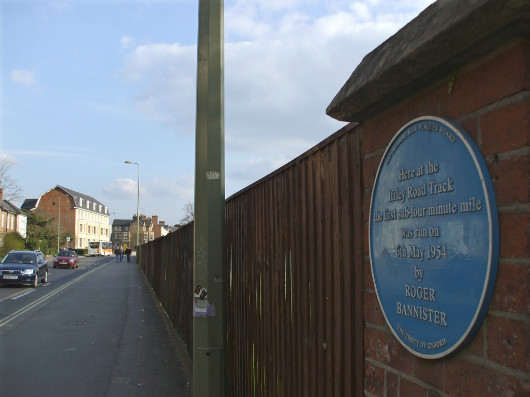 When the recently deceased Roger Bannister began running track and studying medicine at Oxford, the four-minute mile had become known as “trackdom’s Holy Grail.” The religious allusion here was hardly accidental. Instead, it framed the magnitude of this barrier, its allure as well as its seeming impossibility.

Additionally, the symmetry and elegance of this particular distance and time was custom-made for sacred reference. As sportswriter Gary Smith observed, “Four minutes was a barrier that had withstood decades of human yearning and anguish, a figure that seemed so perfectly round—four laps, four quarter miles, four-point-oh-oh minutes—that it seemed God himself had established it as man’s limit.”

Indeed, for many years, the four-minute mile was little more than a launching pad for debating the human body’s intended design. In 1923, the Finnish distance running legend Paavo Nurmi set a world record of 4:10. Impressive enough was this time that one track fan quipped in a letter to Grantland Rice that the sub-four mile was only possible with “the introduction of some stunt such as feeding the runner oxygen during the performance.” Rice agreed, adding that while technical events (jumps, throws) might benefit from material improvements, no innovation could similarly change distance running. “As heart and lungs are now made they could never stand the strain of a 4-minute pace without collapsing or running into serious results.”

In 1933, when New Zealand’s Jack Lovelock produced a 4:07.6 world record time, talk of a sub-four mile crept into the sports pages. Robert Edgren, however, was not impressed. “It is a shame to belittle such a performance by talking glibly of a ‘four minute mile,’” the sportswriter thundered. Running, he insisted, “is a natural performance, in which form changes very little, if it all.” Appeals to nature met with scientific data when the famed track coach Brutus Hamilton consulted a study by Finnish physicists and concluded that human beings would peak with a 4:01.6 mile.

Then on May 6, 1954, Roger Bannister finally did what many said could not be done. Armed with an extraordinary physique, a rigorous and smart training regimen, and a cadre of capable pacers, Bannister crossed the line at 3:59.4. Few images are more iconic in the world of sports than that of Bannister finishing this race at Iffley Road track. Head thrust back, eyes closed, mouth agape pulling for air, arms drifting outward, legs pushing forward. Off to the side, the onlookers marvel as they document his momentous achievement.

With this, Bannister had become the “miracle miler.” Again, the religious reference served an important purpose, emphasizing that Bannister’s finishing time was more than a cluster of numbers. It was rather a sporting first that quickly became an earthly representation of an otherworldly standard. “There was a mystique, a belief that it couldn’t be done,” Bannister would later say, “but I think it was more of a psychological barrier than a physical barrier.”

With the barrier now removed, it only took Landy six weeks to better Bannister’s record, running a time of 3:58. Bannister would exact revenge on August 7, 1954, when the two finally met in what would become known as yet another miraculous mile. On that day, Landy made a tragic error in the homestretch and looked behind his left shoulder, while Bannister conjured the strength to sprint past Landy’s blind side and onward to victory. Both runners broke 4 minutes, another landmark event in what was a memorable summer in track and field lore.

No doubt, 1954 marked a break in time, the beginning of the sub-four era. At present, one estimate posits that over 500 American men alone have broken four minutes—at least ten high schoolers.

Irrespective of how relatively commonplace breaking four is now, Bannister’s “miracle” on the track was, and is, a powerful reminder that barriers do not always signify the impossible. Instead, they often stand as challenges, beckoning us onward to bridge the gap between the person we are, and the person we aspire to be. Perhaps this is the reason why we are drawn to the image of Roger Bannister’s exhausted body reaching across the finish line. Beyond the race itself and beyond its historical specificity, the photo reminds us in a most enduring way that with the right balance of ingenuity, willpower, and good fortune, we too can transcend and redefine our limits.

See All Articles by Arthur Remillard