The name of Mitt Romney was booed relentlessly at the recent Conservative Political Action Conference (CPAC) in Fort Washington, Maryland.

This year’s CPAC was noteworthy for the relative absence of Christian Right speakers and the general downplaying of the religious wing of today’s conservative movement, but it still spoke volumes about the nature of the movement’s view of the role of religion in public life.

Donald Trump has used his bully pulpit to attack Romney for voting in favor of removing him from office during the Senate impeachment trial. At last month’s National Prayer Breakfast, the president made a less-than-veiled attack on Romney’s Mormon faith when he said: “I don’t like people who use their faith as justification for doing what they know is wrong.” On Saturday, as he spoke to the CPAC faithful, Trump called Romney “a low life.”

Trump’s followers on social media and conservative cable outlets have also excoriated Romney. Pundit Ann Coulter dubbed him a “useful idiot” for Democrats. Donald Trump Jr. demanded Romney’s removal from the Republican Party: “He’s now officially a member of the resistance & should be expelled.” In the immediate wake of Romney’s vote, Matt Schlapp, chairman of the American Conservative Union, the special interest group that stages CPAC each year, tweeted that the 2012 Republican presidential nominee was “formally NOT invited” to this year’s conference. In a Fox News interview, he added: “This year I’d actually be afraid for his physical safety, people are so mad at him.”

Schlapp may have been right about Romney’s safety at this year’s CPAC. Charlie Kirk, a pro-Trump activist who works on college campuses, encouraged the audience to boo every time Romney’s name was mentioned during the conference. In a relatively successful attempt to work the crowd into a frenzy, Kirk claimed that Romney lied to the people of Utah about his conservative credentials while campaigning for his Senate seat.

These attacks on Romney at CPAC and elsewhere seem counterintuitive when one considers that the Senator’s deeply held religious convictions informed his vote to remove Trump from office. “I am a profoundly religious person,” Romney said as he fought back tears during his address on the floor of the Senate on February 5, 2020, the day before the Senate would vote on removal, “I take an oath before God as enormously consequential.”

Whatever one thinks about Romney’s speech and its references to his Mormon faith, it is hard to argue with the fact that it was exactly the kind of faith-informed, conscience-driven style of politics that Christian conservatives have long championed. Romney’s speech seemed to bolster, not undermine, what Kirk calls his “conservative credentials.” It was an exercise of religious liberty, one of the major political issues that led many conservatives to support Trump in 2016 and will lead them to pull a lever for the president again in November.

Why then would Jerry Falwell Jr., the president of Liberty University, a Christian Right school founded by his father in 1971 to fight for conservative evangelical values and the freedom to express those values in the public square, tell Romney, in a Fox News interview, to “keep his religion in his personal life?” Falwell and Kirk recently founded the Falkirk Center, a Liberty University think tank designed to advance Judeo-Christian values and defend “religious liberty.” Perhaps Falwell and Kirk should hire Romney as a spokesperson for their new center.

When Romney delivered his anti-Trump speech on the Senate floor, he was bringing religious belief and conviction to what Chief Justice John Roberts described during the impeachment trial as the “world’s greatest deliberative body.” Romney’s integration of faith and politics was a direct assault on secularism in government. He exercised his religious-shaped conscience at a crucial moment in our nation’s political history. When future schoolchildren study his speech, they will inevitably think about it in this light.

Those who care about religious liberty for all Americans should cheer, not boo, Romney’s invocation of faith on the floor of the Senate. But this will not happen because Christian conservatives only care about faith-informed politics and religious freedom when it benefits Trump or their own political agenda.

It was not too long ago that conservative evangelicals supported Mitt Romney in his 2012 bid to defeat incumbent President Barack Obama. While some of these evangelicals, fearful of electing a member of a religious group that they believed to be a cult, backed other candidates in the GOP primary (Rick Santorum, Newt Gingrich, Rick Perry), they rallied around the Mormon candidate in the general election. Anyone but Obama.

But whatever support Romney had among these evangelicals quickly faded after the election of Donald Trump in 2016. Trump understood evangelical voters better than Romney. He learned rather quickly that he needed their support in large numbers to defeat Hillary Clinton. Someone handed him the Christian Right political playbook—an approach to politics focused on abortion, religious liberty (as evangelicals define it), and Israel—and he executed it to perfection. Romney did everything he could to stop the reality television star from becoming president, including the delivery of a speech at the University of Utah in March 2016 in which he called Trump a “fraud” and said he was “playing the American public for suckers.” When white evangelicals helped carry Trump to an electoral college victory, the name “Mitt Romney” was already anathema to these voters. Romney’s vote to remove Trump from office during the 2020 impeachment trial was the icing on the cake.

The case of Romney’s relationship with American evangelicals speaks volumes about the current state of Christian Right politics. The leaders of this movement are quick to tweet Bible verses for their followers and teasers about their relationship with Jesus or their latest sermon series, but when it comes to politics, they are ruthless and cutthroat. They claim to pray for their enemies on Sunday, but they prey on their enemies the rest of the week (and often on Sunday morning as well). The Christian Right is no longer a religious movement, it is a political one. The only thing different about Ralph Reed, Robert Jeffress, Franklin Graham, Paula White, Tony Perkins, and the rest of the Christian Right leaders is the content of their political message. Their ruthless, dog-eat-dog tactics are the same as their conservative political counterparts—yet another evangelical accommodation to the larger culture. Like most political movements, the Christian Right sees the world in black and white. It demands absolute loyalty. It understands independent thinking as a kind of betrayal. And as Mitt Romney now knows, it punishes traitors.  ♦ 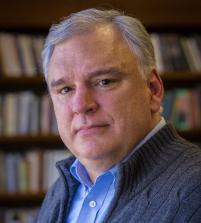 Author, John Fea, teaches American history at Messiah College in Mechanicsburg, Penn. He is the author of Believe Me: The Evangelical Road to Donald Trump, recently released in paperback with Eerdmans. He blogs daily at The Way of Improvement Leads Home.

See All Articles by John Fea