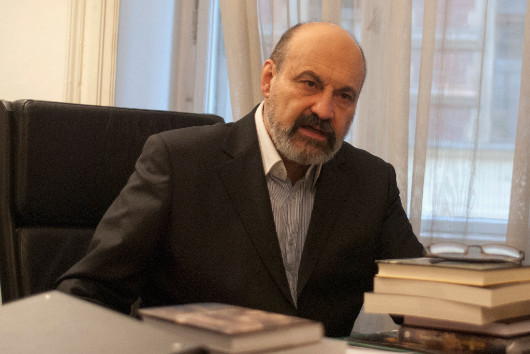 Czech theologian, sociologist, and Catholic priest Tomáš Halík (born June 1, 1948) will soon become a septuagenarian. By any measure, Halík has lived a remarkable life that has helped intellectually and spiritually shape a great number of people from all backgrounds. To commemorate his sixtieth birthday and bear witness to his inspiration and influence, a Festschrift included sixty contributions from a variety of European authors, including Václav Havel, Martin Palouš, Václav Bělohradský, Anselm Grün, Joachim Wanke, and Adam Michnik. Even though Halík was by then a household name in his native Czechia and well-recognized in neighboring countries including Slovakia, Poland, and Germany, he was less known in the United States. He gained greater recognition in the English-speaking world during the past decade when three of his books were translated into English—Patience with God (2010), Night of the Confessor (2012), and I Want You to Be (2016)—and he received the prestigious Templeton Prize (2014).

During the Communist era, Tomáš Halík worked—among other occupations—as a psychotherapist aiding people struggling with substance abuse. He was engaged in the ecumenical movement and underground church and was secretly ordained to the priesthood by Bishop Hugo Aufderbeck in Erfurt, East Germany, in 1978. In the following decade he participated in secret home seminars with theologians such as Johann Baptist Metz, Hans Küng, Walter Kasper, and Christoph Schönborn; established contacts with Polish bishops and Catholic intellectuals; clandestinely taught theology courses; worked closely with Cardinal František Tomášek; and was involved in the “Decade of Spiritual Renewal of the Nation” project. In the years immediately after the 1989 Velvet Revolution Halík helped plan Pope John Paul II’s historic visit to Czechoslovakia; the Pope would appoint him adviser to the Pontifical Council for Dialogue with Non-Believers. He also served as general secretary to the Czech Bishops’ Conference and published two books that explore the relationship of faith and culture and the church’s role in a free society.

Due to space constraints, we need to fast-forward about a quarter-century to the present day. At seventy, Tomáš Halík shows no signs of slowing down. He is a professor on the Philosophical Faculty of the Charles University, priest at the historic St. Salvator Church in Prague, and president of the Czech Christian Academy. In addition to his involvement in academic and ecclesiastical circles, he communicates with the broader society through his popular books and frequent television and radio appearances, newspaper interviews, and commentaries. He conveys his erudition and life experience by employing language that is neither pedestrian nor abstruse, as well as an elegant literary style. Halík’s opinion has been greatly valued by political leaders. Havel, who had known him since 1967, made Halík his advisor and even suggested that he would be his worthy successor to the Czech presidency.

Tomáš Halík has his share of critics—both within and outside the church—who view him as too liberal and pro-Western. He has been lambasted for his tolerant attitude toward Muslims and Islam, for speaking critically of Vladimir Putin and the Russian Federation’s actions in the Ukraine, and for urging, on moral grounds, a greater openness towards admitting refugees from the Middle East and Africa to Czechia. However, it is difficult, if not impossible, to pigeonhole Halík theologically or politically because of his eclectic mind and capacious heart. In terms of his basic approach to church and society, he would subscribe to neither “traditionalism” nor “liberalism.”

In his book Night of the Confessor: Christian Faith in an Age of Uncertainty, Halík provides one interpretive key to his life and work: “As I observe the present situation in the extremely polarized Catholic Church (and I imagine that the situation is very similar in some of the other major churches), I am unable to identify with either of the two extremes of opinion … I radically oppose the view that the democratization and liberalization of the structures, discipline, and certain areas of moral teaching of the Church will usher in a new springtime of Christianity and avert the crisis of the Church. Such an expectation would be just as foolish as the opposite expectations and appeals of the traditionalists for a return to preconciliar triumphalism and the waging of a ‘cultural war’ against the modern world and liberal values.”

In 1974, Martin Marty coined the term “public theology,” which has been later employed and conceptually developed by religious scholars such as David Tracy, Ronald Thiemann, and Max Stackhouse. Some four decades after the term was first used in English, it is just now entering the lexicon in post-Communist Central Europe. Indeed, searching the phrase “verejný teológ” (public theologian) in Slovak or Czech only seems to yield search results related to this author or his work. I first used the term in Slovak in 2017 and am not aware of any previous usages. This is not to say that there are not publicly engaged theologians in this part of the world; it does, however, indicate a lack of sustained reflection on the role of theology in the public square and the need for responsible public theologians who can contribute to building a good society.

Tomáš Halík has been given many designations including Monsignor, pastor, spiritual leader, professor, theologian, sociologist, public intellectual, and active citizen. For me, he is the model of a public theologian who paradoxically emerged from a country that has been viewed as “atheist”—a popular label Halík rightfully contests even though its usage is understandable, since Czechia is often ranked one of the world’s least religious countries. Defining characteristics of Halík’s public theology can be described, inter alia, by the following adjectives: interdisciplinary, catholic, dialogical, contextual, and narrative. This type of theology is perhaps the least understood and most needed in the post-totalitarian countries of Central and Eastern Europe, and one would have to look long and hard to find a better example to analyze or to follow than Professor Halík.

Last October, I had the good fortune to get to know Tomáš Halík not just as a brilliant public theologian and worthy recipient of numerous accolades but also as a private man. I accompanied him in Chicago for three beautiful sunny days. I saw him pay respect at the graveside of Mircea Eliade, recognize the value of academic scholarship in the hallways of the Divinity School, admire the beauty of creation at the lakefront, pursue his love of books at Powell’s, and appreciate history, art, and culture at Chicago’s museums. I also encountered a caring man, as he sought a present for his niece; a praying man, as we visited the Holy Name Cathedral; and a sagacious man, who always had a thoughtful answer. He has a generous spirit, a good sense of humor, and many lively stories. This is an opportune time for us to celebrate, express our gratitude, and wish Tomáš Halík all the best in the next decade of his life.