Native Sons? Of Gilded and Guilty Ages in the Windy City 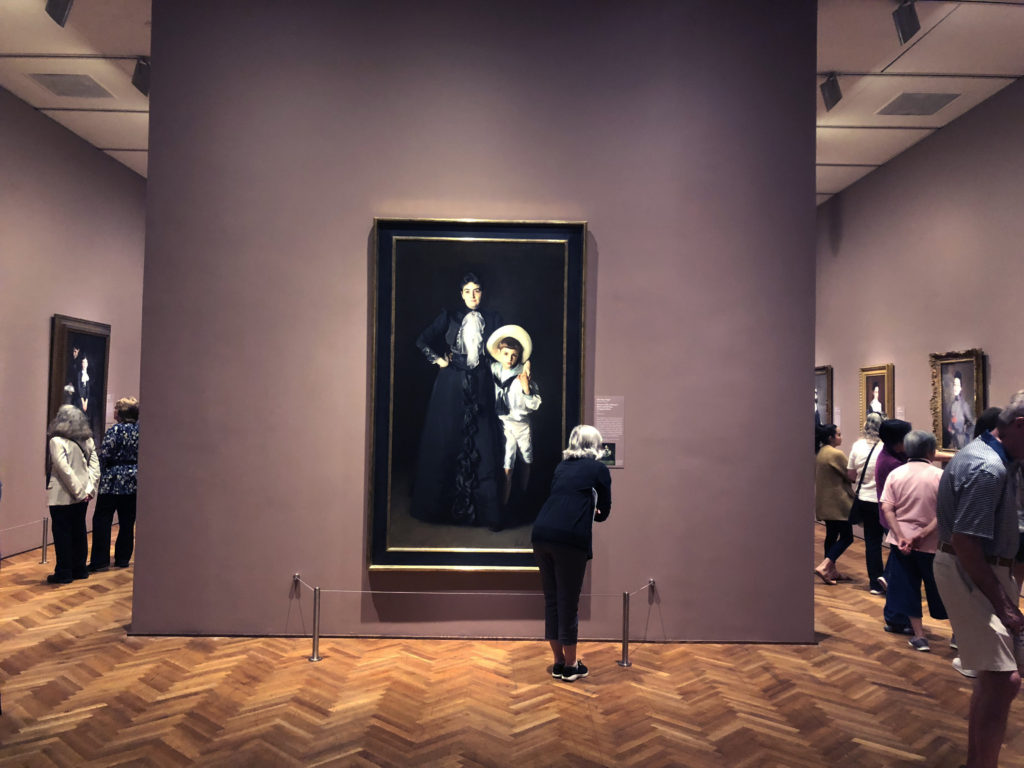 Ed. Note: Both the Monday and Thursday columns this week feature current and recent exhibitions at the Art Institute of Chicago. Stay tuned for Cynthia Lindner's reflections on the James Webb installation, "Prayer," currently on display at the Art Institute.

Throughout the summer, the Art Institute of Chicago highlighted two exhibits: “John Singer Sargent and Chicago’s Gilded Age” and “Charles White: A Retrospective.” The juxtaposition did not appear to be intentional, but viewing them in tandem afforded quite distinctive, if in the end not necessarily contradictory, historical perspectives on the city. At the south end of the museum, viewers saw portraits by Sargent of wealthy Chicagoans who sought through them to achieve elite status for their city. At the north end, just inside the Monroe Street entrance, viewers could tour the first effort at a full chronological presentation of White’s previously dispersed and to some extent unappreciated oeuvre, which had its genesis and drew its inspiration from the artist’s childhood in Chicago, and notably his training at the Art Institute and familiarity with its permanent collection throughout his formative years.

To view a Sargent painting is to experience synesthesia: one can feel with one’s eyes the textures of the fabrics. This uncanny verisimilitude can initially obscure the painter’s capacity for irony: opulence never looks so good as it looks in Sargent, and lingering viewers of his production often discover multiple acknowledgments of this discrepancy, sometimes in front of and sometimes from behind the easel. The portraits for the Gilded Age are, however, an exception. Here the familiar tactility is accompanied by an absence of irony: these wealthy Chicagoans represent the aspirations of their fair city, and art, particularly art by Sargent, announces the emergence of a great new metropolis.

To view White is to experience something else—an odd sort of chronological dislocation at once historical yet ahistorical. Historical in that, so far as I could see, nothing White painted escaped the brute imprint of American slavery. Ahistorical in that White imposes this imprint not just on scenes from the civil rights movement and a mural of American history, but on portraits of biblical prophets and songstresses. A kind of permanent historical irony abounds, in the sense that throughout White’s work the lives of the lowly, to borrow from Harriet Beecher Stowe, stand for America but also in an important sense for the history of the world. Greatness—of city, nation, world—is discovered not in privilege but in its opposite. White’s superb skills in painting, printing, and drawing always aimed to effect what he called “images with dignity”: to afford to black peoples throughout history the status that their social orders perpetually failed to afford them. In its way, White’s art is as celebratory as Sargent’s—in the service not of confirming greatness, but of restoring it to its rightful owners. It is an exercise in a kind of aesthetic reparation.

Intentional or not, the exhibits thus serve as foils to each other. Where “Gilded Age” documented a specific historical moment and class in Chicago’s history, the White retrospective spanned the subsequent twentieth century through the lens of a significantly less recognized (or remunerated) artist who used his no less considerable skills to dignify and culturally integrate the lives of black or African-American peoples. Where Sargent is shown in a particular moment and to a particular strategic purpose, White is shown as rendering a century both in its own particularity and as a metonym for a wider chronology that spans biblical prophecy, American slavery, and the lives of black folk through the civil rights movement and its aftermath. One sees in Sargent’s art a faith that a particular moment in time is free of its past and certain of its future. One sees in White’s art an insistence that time is not and never can be an isolated moment. Pivotal to any such comparison is of course the stipulated locus of history: in this case, “Chicago” or “blackness.”

White’s vision is much closer to Richard Wright’s Native Son than Sargent’s, but his emphasis on dignity across the ages strikes a different chord in black experience from Wright’s eviscerating depiction of Bigger Thomas’s despair. White and Wright each document a guilty age, or an age that should have been marked by guilt over a city’s (a nation’s) treatment of its true children. In these they are siblings, native sons marked by the same space. Sargent by contrast was an adopted son, an ornament to adorn the white aristocracy of Chicago.

The narratives told by these shows at the Art Institute suggest retrospectively that the gilded age was succeeded by a guilty age—the treasured aspirations of Chicago as America’s most European city gave way over time to the brute fact of segregation. Writing of its Sargent exhibit, curators at the Art Institute describe its purpose as illustrating “the network of associations among the artist, his patrons, his creative circle, and the city” as indicative of “the cultural ambitions of Chicagoans to shape the city into a center of art.” Of course this phrasing could also describe the artistic career of Charles White, a truly native son who learned his craft and his subject matter in the city. Is there a place where gilded and guilty can meet?